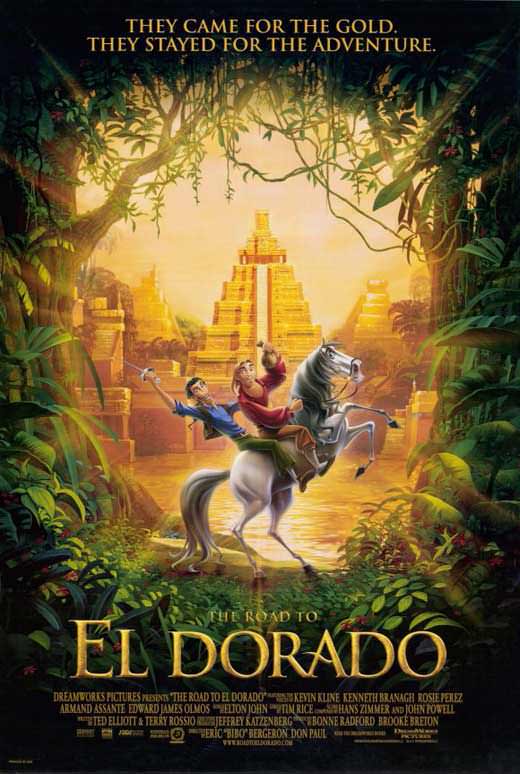 Plot: Miguel and Tulio are two con men who swindle a guy on the street out of his map to the legendary El Dorado: the city of gold. However, they end up getting trapped on a ship before they can head off on their adventure.

While escaping the ship on a lifeboat, they, as well as the horse, Altivo, end up lost at sea. They get lifeboat-wrecked on a random island that just happens to be the place to start looking for El Dorado. They find the city, but are mistaken for gods by the natives. Being good con men, they intend to keep up the lie just long enough to get a whole bunch of gold and run back to Spain with the help of Chel, a local who wants to go back to Spain with them. Their lie is not easy to keep up, and with an evil high priest wishing to constantly give a blood tribute, they have to get out of El Dorado as soon as possible.

Breakdown: Hmph, I really wanted to enjoy this more than I did. Don’t get me wrong, it’s by no means a bad movie. It’s just that I had hoped that this was one of those lesser known gems I could discover. Alas, no. Just above average. Dammit Dreamworks, you got my hopes up with Prince of Egypt!

To start off on a good note, the movie does have quite a few funny moments. Miguel and Tulio work well off of each other as best friends, even if they do have the typical dynamic of responsible one and goof off.

The art and animation can be simply amazing sometimes, and the Aztec feel was a welcome change of pace.

The title is almost entirely an outright lie. If you were expecting this movie to be like a road trip/treasure hunt movie, you’ll be sorely disappointed because it takes them less than 25 minutes to reach the place. All of the steps of the map are even done in a montage.

To make matters worse, they did the one plot I really hate – trying to pull off a lie. I hate feeling awkward. This type of plot brings nothing but awkwardness, and it just makes the movie more predictable. We know it all leads to one end – at least one important person finding out and crap hitting the fan because of it.

Another plot device they included was the one best friend overhearing something that insults him so he stays mad at the other until he saves his life thing.

One thing that bugged me in particular was the seemingly forced relationship between Tulio and Chel. They don’t connect on really anything – they just flirt. We don’t learn anything about Tulio, and we know even less of Chel besides the fact that she wants to go to Spain and likes stealing. Yet there’s some flirting, some sex-ish activity on a pile of gold (which is the best sex, of course) and then, boom, they basically want to start a life together. She served no real purpose in the entire movie besides to be fanservice and/or to have a girl among this sausage-fest.

The ending was also fairly disappointing. Considering how blood-hungry the high priest guy was, I was expecting him to be a real threat at the end, but no. He does learn of the non-divinity of the boys and decides to work some mojo to get rid of them, but it was a short and disappointing battle that had a short and disappointing end. You think he’ll reprise when he joins up with some Spanish soldiers and wishes to lead them to El Dorado to take it over, but the final climax is to crash the boat into the entrance of El Dorado so they can never enter (and supposedly the citizens of El Dorado can now never leave.) and then he’s easily dragged away by the soldiers who believe he was lying all along. It’s ridiculous that a guy who could possess or control a giant stone jaguar and do all sorts of freaky magic could be contained by Spanish soldiers.

Apparently, I’m not the only one who was disappointed with this because the movie was a box office failure losing over $20 million and receiving negative to moderate ratings across the board by critics. However, it was nominated for numerous awards.

The music was just okay. It seemed weird to have only one song that the characters sing like it’s a musical number while everything else is in the background. Besides that song, all of the vocal songs were done by Tim Rice and Elton John, whom I haven’t seen work on an animated movie since The freakin’ Lion King. However, I found the songs to just be mediocre at best.

Bottom Line: It’s a perfectly fine movie to kill time, and it’s pretty funny and nice to look at sometimes. However, it’s still basically an awkward, predictable movie with no backstory for any of the characters and a pretty flat ending.

Recommended Audience: Dreamworks likes to swear here and there but nothing worse than ass, crap or hell. One sex-ish scene, but it’s honestly just an off-screen heavy make out. No nudity. A little blood. 10+