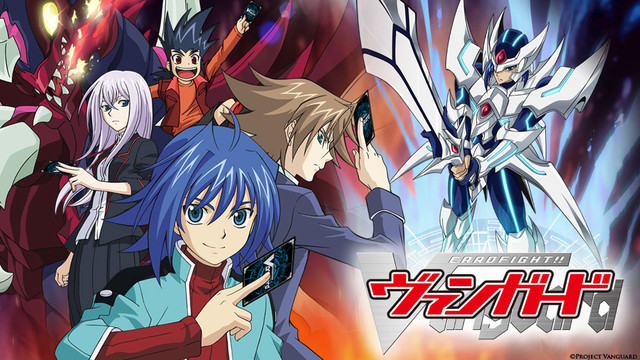 Episode 8 – The King of Knights Enters the Fray!

Episode 21 – Rematch in the Final Match!

Plot: As Aichi and Kai continue their battle, Kai finally remembers who Aichi is. Aichi and Kai met several years ago. Aichi had just been beaten up by a bunch of bullies so Kai decided to give him the Blaster Blade card, urging him to imagine himself as the great paladin fighting on the planet Cray in order to boost his confidence. It worked, kinda, and from then on Aichi developed a great love of the game.

Aichi always wanted to battle Kai again as thanks for giving him something that helped him believe in himself. However, Kai moved away not too long after that. He still looks up to him and is very grateful for what he did for him, but Kai brushes it off and says he just gave him that card so he could kick his butt in Vanguard much worse than those bullies did that day. Anything Aichi thinks he knows about him is a stupid fairy tale he lets himself believe.

Despite this, Aichi manages to nearly defeat Kai, but it was really Kai letting Aichi play right into his hands. He uses the damage cards Aichi racked up on him to give his Dragonic Overlord several attacks, devastating Aichi and nearly defeating him, but he managed to save himself with a healing drive trigger.

Aichi says he doesn’t believe what Kai says about his motivations for giving him Blaster Blade. He knows what he remembers of how he was back then, and that will never change. He makes another attempt to battle with Kai one damage point away from defeat. Kai has more than enough to defend himself against the assault, but Aichi lucks out with a card that allows him to power up his Blaster Blade and knock Kai’s final damage point down.

Kai gives the Blaster Blade card back to Aichi, with Aichi having now won it back fair and square. He leaves with barely a word, leaving Aichi to believe that he hates him now.

The next day at school, barely anything’s changed. His classmates still all openly mock him for being shy and not knowing answers in school, and Morikawa, the bully who took his Blaster Blade before, is still bullying him. He’s unimpressed with Aichi’s victory over Kai and moreso believes Kai is a weakling who is too embarrassed to ever show his face around the card shop again after losing to “Shy-chi.” He also refuses to battle Aichi or teach him anything at Aichi’s request.

The status quo seems to be returned when Aichi sadly returns to an empty card shop, but his spirits are quickly heightened when Kai, Morikawa and everyone else return to the card shop wanting to battle Aichi.

Breakdown: This was a pretty good episode, giving us insight into Kai and Aichi’s background, Aichi’s connection with his Blaster Blade and what Vanguard truly means to him.

Like I mentioned in my Episode One-derland segment, instead of having holograms or real monsters in the card battles, all of the battles are imagined by the players, much like how anyone playing a real-world TCG would likely do. However, it’s a bit more than that. Aichi doesn’t just imagine the monsters and battles for the sake of ‘ooh cool, fighting and monsters!’ he imagines it because it gives him confidence and, in a way, gives him a place of belonging.

To many people, Vanguard is just another TCG, but to Aichi, it’s something that he treasures and makes him feel a little better about himself, even if he seemingly never has anyone to play against.

I appreciate that, and I’m sure many viewers would be able to relate to that.

It’s a little obvious that Kai’s lying about his intentions regarding giving Blaster Blade to Aichi. First of all, his claim makes no sense or makes Kai look stupid. He gave him such a rare and powerful card just so Aichi would learn to play the game, battle him, defeat him very badly, I guess, and rub it in his face or something?

That’s very convoluted and time-consuming just to say ‘Haha, you suck, person who has barely played the game!’ And what if he still never decided to play? That would mean Kai gave away a powerful rare card for nothing.

Second, his demeanor completely changes when he says this, like he’s trying to rile up Aichi on purpose. Though, to what end, I don’t really know. Maybe so Aichi would be less sentimental about the match?

The battle itself was pretty cool and entertaining, but I won’t deny that it has two ‘heart of the cards’ moments. Maybe not that cheesy, but Aichi survives Kai’s assault on pure luck by drawing a healing trigger, which I can take just fine, but he also has the luck to draw another trigger that wins him the game on his next turn.

Aichi’s character is indeed turning out to be pretty unique for a shounen gaming anime protagonist. Yeah he has loads of beginner’s luck, and I hope he doesn’t develop the newbie messiah syndrome, but he’s shy, has little self-confidence, is just starting out with the game for the most part and has few to no friends.

Plus, when he pulls his first major win out of his ass, no one truly seems impressed by him. No rumors go around school, he’s not heralded as ‘that kid who beat Kai’, he’s not developing an ego off of it, he just wins then goes back to his life. It’s almost like, *gasp*, the world and everyone in it don’t revolve around this card game. BLASPHEMY.

He hopes to see and battle Kai again, and even tries to make friends with the bullies who took his Blaster Blade in the first place. He’s almost the exact opposite of every shounen gaming anime protagonist I’ve ever seen. Watch this and something like Bakugan back to back and the contrast will knock you on your ass.

What confuses me a bit is the ending where everyone comes back to the card shop all happy and raring to battle Aichi. Kai I can understand a bit more because he probably wasn’t angry in the first place and just walked away silently because he’s a stoic lone-wolf character and that’s what they do. However, just minutes prior, Morikawa and the other bully just refused to teach Aichi, refused to battle him as well, and mocked Kai for losing to Aichi, mocking Aichi in the process. Then when they get to the card shop it’s all, ‘Hey, if you want to battle Aichi, I’m playing him first!’ and they’re all good friends? Huh?

All in all, a pretty good episode and a solid conclusion to the first episode. Despite some hard-to-swallow luck, this series is maintaining its easygoing attitude, and I love that.

Next Episode, Aichi’s sister, Emi, discovers his love of Vanguard.