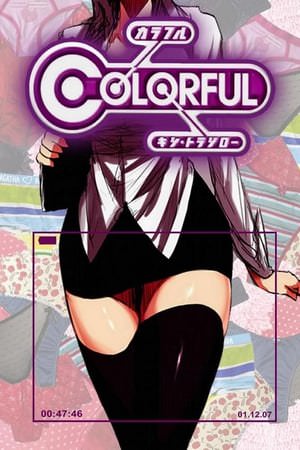 Breakdown: This is a series of 6 minute shorts about……guys being perverts and women being treated as sex objects.

I am in no way exaggerating or kidding. If there were a show called ‘Fanservice: The Anime’ it’d be Colorful. I watched two episodes of this and both episodes were about the same thing – pervy guys saying nothing but constantly perving on what women were doing. They were mostly getting insanely entranced by the panty shots or looking at their cleavage, but episode one did showcase two students getting all drooly over their hot teacher constantly repeating the differences between L and R (Watching her mouth and tongue and whatnot.)

It’s sexist to both men and women, really. It shows men as nothing but perverted braindead idiots who are always trying to get a look at women’s panties, bras and cleavage. It shows women as being nothing but objects for sexual desire. Besides the few times that randomness pops up, there’s no humor to it. I was going to actually watch the rest since the episodes are just six minutes long, counting the OP, and there’s only 16 episodes, but there’s no plot. I wasn’t saying ‘none’ in the plot section to be funny. Two episodes in and no plot whatsoever. Just lots of guys being pervs.

The art is very bad. Sometimes they’ll have a fairly nice shot, but you can tell that, if they did have a budget, all of it was spent to make the women look as attractive as possible. The animation for the OP has cut outs flying across the screen and everything looks poorly drawn and mostly poorly animated.

The music in the BG is…okay, but the OP is like a chipmunk with rabies gnawing on your brain. The lyrics are asinine (They repeat something like “my temperature is (something) come rise it with me”) and the melody is catchy, but it’s coupled with a singer SCREECHING the lyrics to the song. It’s a god-awful song but also the kind of song that would easily get stuck in your head.

*sigh* I don’t even…*cough* It is currently licensed in the US by AEsir Holdings who also have the licenses to–Oh let me guess. A bunch of good things? Neon Genesis Evangelion, Princess Tutu and Saiyuki….

NO. NO. You don’t get to have all of these insanely great connections, Colorful. You just don’t. When these people signed up for this project, they must’ve thought they’d be working on Colorful the movie. Either that or they all desperately needed a paycheck.

Recommended Audience: Obviously lots of fanservice, but I don’t think they ever got to full-on nudity from what I saw. Close, though. 13+

3 thoughts on “Colorful (The Series) Review”