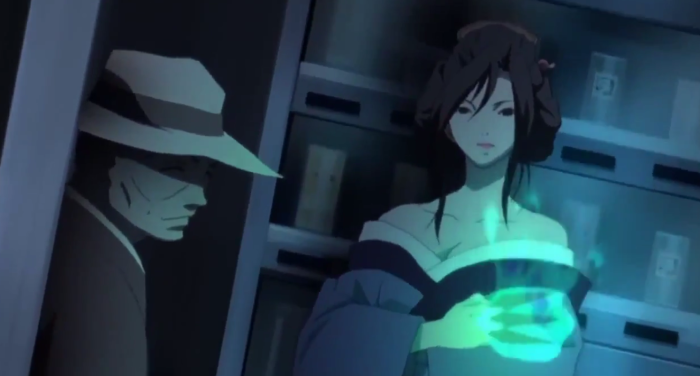 Plot: A new vision has lead the Shibatas to a sanitarium that seems eerily empty outside of a cute little girl named Nina. They know she was the one who contacted Hell Correspondence, but in an odd twist, Ai rejects her request.

Breakdown: Remember how I said a couple of episodes back that the formula was changing? This one completely shatters it….for now.

For this episode, they had Hajime, Tsugumi and Ai narrating, with Ai warning them to turn away.

Today’s episode plays off like a horror movie. Hajime and Tsugumi are heading towards a sanitarium, which is the location of Tsugumi’s latest vision. There, they meet Nina, a strange but beautiful, almost doll-like, little girl who seems to be the one who contacted Hell Correspondence with her father being the target. Her father abandoned her at the hospital, and she sought revenge.

However, Ai, oddly, rejects her request.

This angers Nina, but she moves on rather quickly, attempting to trap Hajime and Tsugumi at the sanitarium forever so they’ll be her father and sister respectively until the end of time.

Nina is revealed to have supernatural control over the sanitarium and tries to keep them from leaving. Ren, Hone Onna and Wanyuudou thwart her attempts time and again under Ai’s orders.

In an effort to get this to end, Ai appears and tells Nina the truth.

This is a little complicated. At this point, you believe the reason Ai can’t complete Nina’s request is because she’s obviously a ghost. I imagine you can’t claim a soul that has already departed, thus it can’t be a bargaining chip for Hell Girl’s service.

However, that’s not the situation here.

This girl is actually not Nina. She is a doll. The real Nina died many years ago from sickness after being abandoned by her father, which is another explanation of why Ai rejected this request since the target must be dead by now. Nina had a doll that looked very similar to her and was her only friend.

The doll, having a soul of its own I suppose, took on Nina’s feelings after she died and started haunting the building even after its closure. She became obsessed with revenge and getting a family of her own, not realizing that she wasn’t the real Nina. It’s only when Ai reveals all of this to her does ‘Nina’ finally leave.

A haunted sanitarium is a great concept as it is, but I think they did an outstanding job at working it for this series. Though, there are some problems, such as, has ‘Nina’ been contacting Ai since she died? If so, why is Ai only now rejecting her? How would Hell Girl be new information to her? She doesn’t even have Internet access or computers – How did she contact her at all?

This episode also revealed that Wanyuudou, Ren and Hone Onna are somewhat whispering behind Ai’s back about what’s really going on with her and the Shibatas. Wanyuudou believes Ai is subconsciously leading them to where her clients are, but admittedly doesn’t understand why she’s going to the trouble of protecting Hajime and Tsugumi from this spirit.

It was really nice seeing these guys be active in other ways for a change. Getting to see them combat another spirit was fun.

We’re breaking entirely from the norm here because, outside of the vision leading them somewhere, this story has no other bits of the Hell Girl formula. No one gets a doll, there’s no string pull and no hell torture. Oddly, if the doll-Nina had some semblance of a soul, you might say Ai was briefly Heaven Girl since she helped her move on from this world.

That’s not to say this episode didn’t have some horror elements because ‘Nina’ does several things that mess with your mind.

This was a really good episode that was a welcome break from the norm and a nice look into a different side of Ai and her comrades.