Plot: It’s the return of the Pichu Bros., and they need help from Pikachu and the gang. They got knocked off of a train that was supposed to be taking them back to their home town, and they have to find their way back.

I’ve only ever seen Pokemon Heroes On Demand, and for some reason the short that went with the movie was never included or offered separately. I never bought the movie on DVD, so Camp Pikachu became an unknown feature to me.

Should be interesting to tackle something I have no knowledge about thusfar, so let’s dive right in!

As always, you can find the Dogasu comparison to this short here.

We start off with the Pichu Bros., apparently they’re becoming a recurring thing in the shorts now, riding on top of a train. The narrator tells us that they’re taking the train back to their hometown, but they hit some…hanging bag or something and end up flying back into the forest.

They fly into a tree branch that has a Wynaut on it and they all get flung into another direction—again with the flinging Pokemon. Why is this a weird running gag in Pokemon shorts?

We cut to Pikachu, Togepi, Psyduck, Corsola, Cyndaquil, Totodile and Phanpy playing by themselves in the forest. No idea where Ash, Misty and Brock are. Again. I also have no clue where all of the other Pokemon are, nor why none of Brock’s Pokemon are present here. Again. They just seem to pick and choose who gets to be in the shorts sometimes.

The Pichu Bros. and Wynaut land on Psyduck’s head, have a quick reunion with their old pal Pikachu and explain what happened. They need to get to the train station to find another train back to their hometown and we get our blech-y CGI wood title screen. 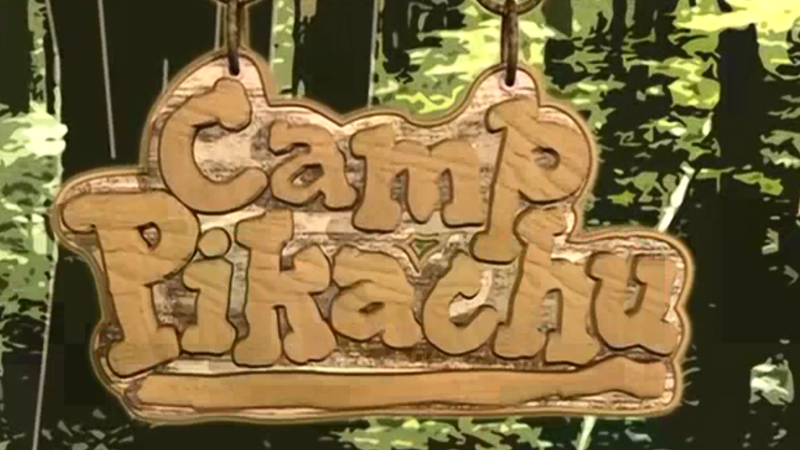 Be glad you didn’t get an animated gif version.

The gang starts their journey, and, if you ever wanted Pokemon to have a hoedown song, your dream’s about to come true!

I seriously can’t make heads to tails of this choice….Why a hoedown song? Did they immediately think ‘redneck’ when they thought of camping? I haven’t even seen any camping so far – they’re just walking through the woods.

I would almost say this song sequence is trippy. It’s just…it doesn’t seem like something Pokemon would have….ever…The singer saying the word ‘Pikachu’ in itself is so odd to me. Plus the banjo….I just…I feel weird.

Cut to Meowth and Wobbuffet who seem to be legit camping and are currently on a nature walk. I find it funny that the times when Team Rocket chooses to go on vacation or just not be around are during times when it would be insanely easy to catch Pikachu. They roll down a steep hill together, end scene.

Back with the Pokemon, they play around in a river for a bit with Totodile’s Water Gun, we cut to sunset when the Pokemon play with their shadows, and then we cut to night time when they have a nice campfire courtesy of Cyndaquil.

One of the Pichu Bros. spots something behind them and goes to investigate with Wynaut to find that it’s a Duskull. It scares Pichu for a minute until Wynaut reveals that it’s friends with Duskull.

Back at camp, a stick pokes the Tuffed-Haired Pichu Bro and he goes off to investigate only to be spooked and chased by Duskull. He chases Pichu into the camp, and the other Pichu and Wynaut pop up laughing to reveal it was all a joke. Those silly little rapscallions. Everyone else laughs along with them and we cut to later that night.

It starts downpouring, and they’re soon approached by a Volbeat who tells them how to stay out of the rain – by using big leaves as umbrellas.

Volbeat leads them to a water mill for a dry place to spend the night.

Meowth and Wobbuffet are also stuck in the rain, and they’re spooked by Duskull as well, causing them to tumble down a hill and into the water wheel. They take shelter in the water mill, which they believe is empty, but the other Pokemon are sleeping upstairs.

After more hijinks, Pikachu and Volbeat find the lever and shut off the mill.

The next morning, everyone wakes up, bids farewell to Volbeat and heads off for the train station.

Back with Meowth and Wobbuffet, they take out one cookie as their final food for the trip (Team Rocket is just awful at managing their food supply) and a Skarmory that appeared earlier grabs the cookie from them. However, Wobbuffet and Meowth grab onto it to get the cookie back and end up flying away on the Skarmory.

The group finds their way to the train station, but the train is already heading out. They toboggan down the hill on giant leaves and grab a handcar. Wynaut calls a bunch of its Wynaut friends out of nowhere to help them push the car.

Tuffed-Haired Pichu makes it onto the train, but the handcar starts losing speed and the other Pichu can’t make it on. They try to go faster, and Cyndaquil decides to use his Flamethrower off the back of the handcar to make them go faster. I’m pretty sure that doesn’t work that way. If it did, Cyndaquil would fly off whenever it would use that attack. At the very least, it’d fly off the handcar.

They start catching up, but Psyduck gets flung off the car and into the track switcher, which causes the handcar to go up a mountainside that still seems to roughly follow the train’s original tracks. While they’re on a bridge overlooking the train, Phanpy throws Pichu off towards the train, but all of the Pokemon end up flying off it as well. Totodile realizes that Pichu won’t quite make it, so he Water Guns him further towards the train.

Pichu reaches the train and reunites with his brother, the other Pokemon fall into a conveniently placed pile of hay, Meowth and Wobbuffet also land on the train, which I guess they needed to do, and the Pichu Bros wave goodbye to the gang.

Bottom Line: Well, that certainly was….boring. It’s not awful or even stupid….it’s just boring. I kinda regret writing out the whole synopsis because I barely had a note to say about it the entire time. The Pichu Bros. need to get on a train, so they go to the train and get on….that’s about it. It seems like these shorts are just increasingly becoming more and more of ‘watch cute Pokemon be cute, but do nothing.’

Is anyone else a little pissed that this short is called ‘Camp Pikachu’ and yet all of a minute and a half involve anything camping related? They had a campfire that they didn’t even really do anything at because the Pichu Bros. were too busy with Duskull. And….that’s it.

Even Pikachu didn’t do much in the short, which baffled me. He turned off the water mill with Volbeat, and that’s about it. Wynaut knew the way to the train station, Cyndaquil made them a fire, Volbeat gave them Leaf-brellas and shelter, Wynaut got its friends to help move the handcar, Cyndaquil made it go faster, Totodile launched Pichu at the end and Pikachu amounted to nothing for a change. Don’t get me wrong, that’s actually a breath of fresh air, but it’s weird.

Camp Pikachu has a severe lack of CAMP and PIKACHU.

There wasn’t even a big conflict in this one. The first one had Charizard stuck in a pipe, the second one had the storm, the third had the tire fort thing, the fourth had the psychopathic lawnmower from hell and this one has….nothing. There are mini-conflicts but ultimately nothing.

There wasn’t even any funny parts except maybe Wynaut and Wobbuffet going back and forth like Psyduck and Slowpoke did back in the day.

The art and animation, at least for the Pokemon, was a step up, as it usually is, but the backgrounds and CGI suffer for it. The backgrounds look scratchy as hell, like a kid made them most of the time, and the CGI is just ick. Either it looks fake as hell or it looks overly realistic.

The music was weird, too. The concept of a Pokemon Hoedown still baffles me and the execution is awkward. The BG music and end credit music are forgettable.

Overall, like other shorts, this is probably good for a little kid to watch just to enjoy the cute Pokemon flying everywhere and doing cute things, but everyone else can pass.

Recommended Audience: If you’re not conceived yet, you can probably still watch this.