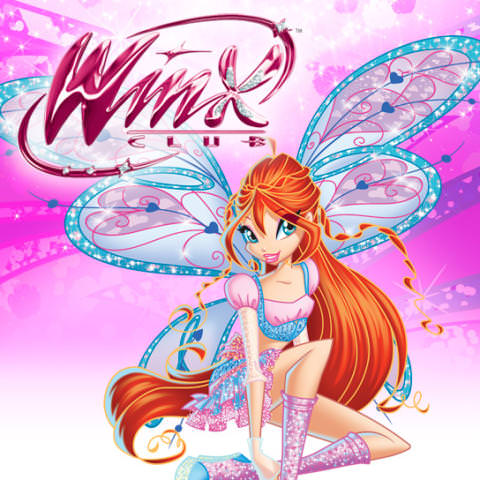 Plot: A teenage girl named Bloom finds a fairy named Stella being attacked by an ogre out in the woods. In an effort to save her, Bloom discovers that she has fairy magic too. This is just the start of something much bigger for Bloom.

Breakdown: Alright, I need to prepare myself for this one. Just gonna jump into my subconscious for a tad.

Girly part of me! Where are you?! I need you for 20 minutes and 14 seconds! I know you’re in here! I felt your presence when I was looking at puppy pictures earlier! Ah there you are. I don’t know why I don’t always look in the nook with my Beanie Baby collection first.

So, yeah, as you can probably guess, despite having the girl parts, I’ve never been that girly. I’ve always been more into things that were more traditionally boy-like. I had some regular girly stuff like Barbies and bead sets and a fake plastic kitchen (I make the best plastic omelets), I’ve even had the tea parties and dressed like a fairy princess once. But if you ever asked me to choose between something like Power Rangers and My Little Pony, I’d be imagining piloting the Megazord before you’d finish your sentence. I never disliked girly things, I was just more interested in boy-ish stuff…..It was cooler….No My Little Pony dolls shoot lasers or explode, okay?

With that in mind, it goes without saying that I never really watched Winx Club. I caught a few minutes of it here and there but—OOH BEYBLADE’S ON!

*cough* Something else would usually come on.

But I’m not without my girliness. My femininity. My female…itude…..I have a purse.

Let’s see if I can get into Winx Club.

Alright, let me level with you. This show is not terrible on the basis of rampant girliness. The girliness levels are high, damn near ridiculous (The main character’s animal sidekick is a damn bunny for crying out loud), but I was able to get through that relatively fine…

This episode is just poorly written.

Right off the bat, the pacing for the first half is breakneck. In the first three minutes, we’re briefly introduced to our main character, Bloom, who is a normal average teenage girl. She sees a fairy girl with a valley girl accent fighting an ogre that is quickly defeating her. Bloom goes to help her, reveals she suddenly has powers, knocks the ogre away, the fairy girl, named Stella, gets back up, defeats the ogre with ease and then faints.

The pacing slows down a bit then ramps right back up after the ten minute mark. For example, in the time span of a minute, Stella brings Bloom to Alfea, an all-girls boarding college for fairies, pixies and something called…gowylians? Gowillians?….Uh those – Most of whom are princesses because of course they are. They learn to be magic users, protectors of their realms and queens.

This place is right down the road from the boy’s school – The Red Fountain School for Heroics and Bravery (A place ‘full of hunks’ according to Stella), where young men learn to become military heroes utilizing such things as hand to hand combat, weapon use, basic survival, magic swords and DRAGONS. Look! Look! The boys get magic swords and dragons! They get the cool stuff!

They’re also close to the Clow Tower School for Witches, which could not be more designed to be a villain factory if you tried.

Then, in the same minute mind you, she informs Bloom that she already invited some of the boys from the Red Fountain school to her house. When did she do this? She never had the opportunity as far as I saw.

If the pacing doesn’t get you, the story won’t do you any favors. It is extremely cut and dry ‘normal person discovers she has magic powers and is tasked to save the world’ shtick. The good guys are obvious, the bad guys are even more obvious, and they practically go out of their way to separate everyone into their respective groups. For God’s sake, if sectioning off good from evil wasn’t enough, they have to cordon off the boys into their own school too. So we can wrangle the love interests? What’s that about?

Yup, that’s literally it’s purpose. All of the future members of the Winx Club will have either fiancés or boyfriends and, you guessed it, they all, barring one, come from the Red Fountain school. Wow.

Bloom’s parents are unreasonably stupid. Not believing your daughter brought home a fairy is one thing, being one room away from a door that is being brutally pounded on by someone, seeing a pet freaking out about it and constantly wondering why the animal is freaking out and pointing to the aforementioned door is another. They have to shake the whole house and actually enter before they realize, holy crap, someone’s at the door.

Anyone familiar with Tuxedo Mask Syndrome in magical girl shows can rest assured that the girls do indeed get rescued in the end by the hero boys she mentioned. At the very least, they barely know what they’re doing too.

The dialogue is okay at best and cringe-worthy at worst. There’s a lot of lame slang, valley girl speak and just horribly written lines delivered in lackluster ways. Par for the course for 4Kids.

The art and animation are horrid. It’s not the absolute worst I’ve seen, but it is quite a ways down there. Italy, I hate to keep giving you crap, but….you kinda keep giving me crap. It’s weird. There isn’t really a tidal wave of animation errors – it’s moreso like an unfinished animation or just sloppily done. The action actually isn’t the worst part of it. The bad animation is most highlighted in the speaking scenes. I laughed out loud when we saw Brendan speaking in that extreme closeup. If there was ever a shot where bobble-head physics applied, it’s that one.

The music is about what you’d expect from a girl-targeted show from 4Kids. Girly earworms. I will wag my finger in 4Kids face for one moment of music faux pas. They very clearly use a piece of BG music from Pokemon when Bloom wakes up. Tsk tsk.

As a first episode, it does the job just fine. Mostly because they’re mowing down the plot of the episode to shove every bit of exposition down our throats as quickly as possible. It introduces us to the characters and their universe just fine. They don’t really explain too well what fairies are in terms of what they do, nor do they explain how their magic works. They also never explain why or how Bloom is a fairy. She just shows she has powers, and Stella spends half the episode gushing about how awesome she is.

They show the big bads, but we have no clue what they want besides power and, I can only assume, world domination.

While this first episode, in my opinion, is a hot mess that doesn’t make me want to watch anymore, I will concede for a bit. Winx Club is a huge franchise spanning over several seasons, movies and even comics.

I’ve read some stuff from future storylines, and it seems somewhat interesting. I don’t want to write off the entire franchise for you all here, so let’s leave this as an;

I, personally, won’t be continuing because it’s just not my cup of tea. However, if you can find yourself getting into shows of this vein, I recommend giving it a go for a few episodes. If anything, the art and animation seem to improve over time.