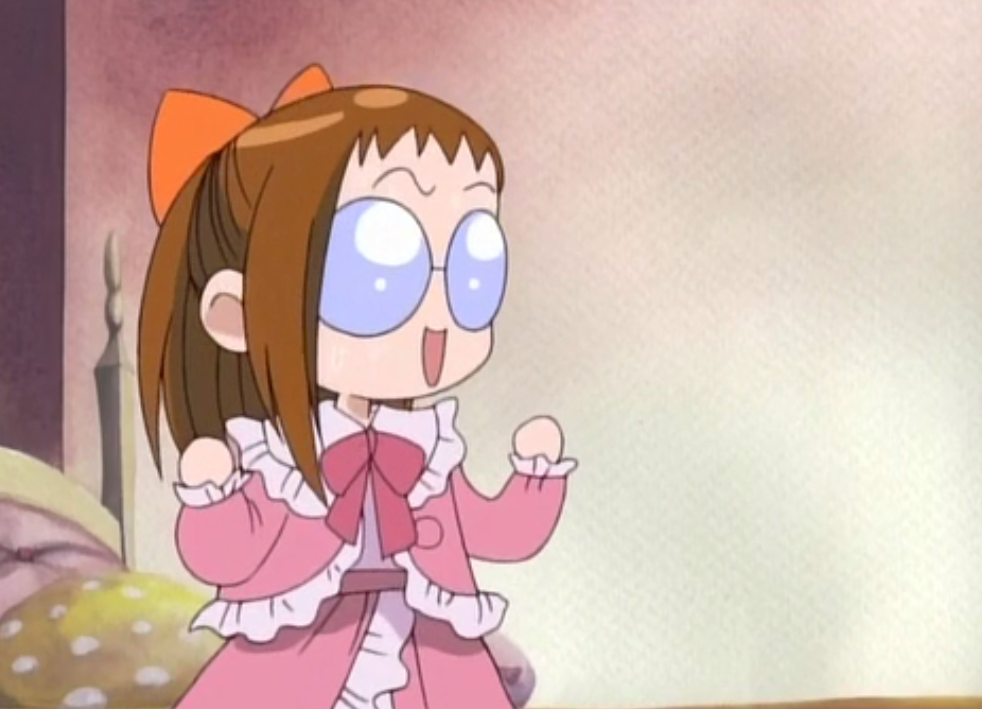 Plot: Hazuki is depressed with her life and wishes to be Doremi. She doesn’t mind the idea of being Hazuki since she’s rich, so Doremi uses magic to change them into each other to live the other’s life. However, is the grass really greener on the other side?

The episode starts off with Hazuki leaving for the day and wondering to herself what would happen if she ran away before the theme song starts. After the theme song ends, we get Doremi giving a short recap as to who she is and why she has powers, the regular magic girl show shtick. Both of these scenes are removed.

Pop tells Doremi that the bath is ready for her whereas Caitlyn asks if Dorie’s having conversations with herself again.

The witch exams are just called ninth through first exams. In the dub, the first exam is called the Fairy Exam whereas, originally, it’s the ninth. Technically this is still descriptive of the exam since it’s an exam that, if passed, allows Doremi to get her own fairy like Majorika has in Lala.

Doremi originally accidentally tells Hazuki that she’s a witch for a second, and imagines herself as a frog alongside Majorika. Hazuki asks what she means by that, she freaks out and says she has a witch’s way of thinking. In the dub, the daydream and the freaking out are removed, and it’s changed to Dorie telling Reanne that she forgot to do her homework. I have no clue why this was cut. 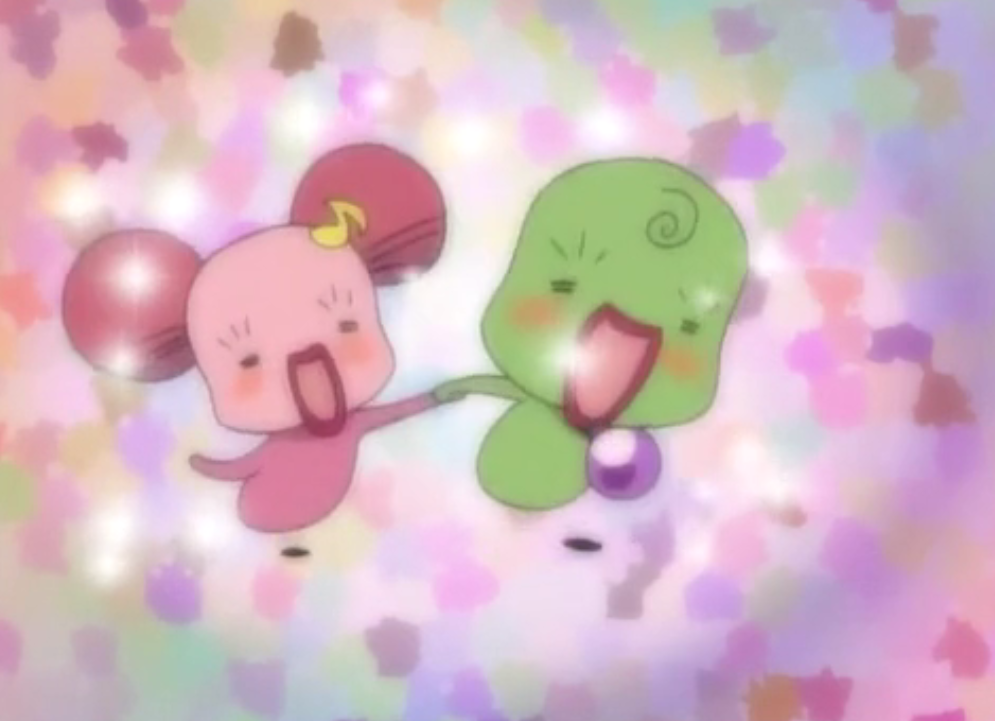 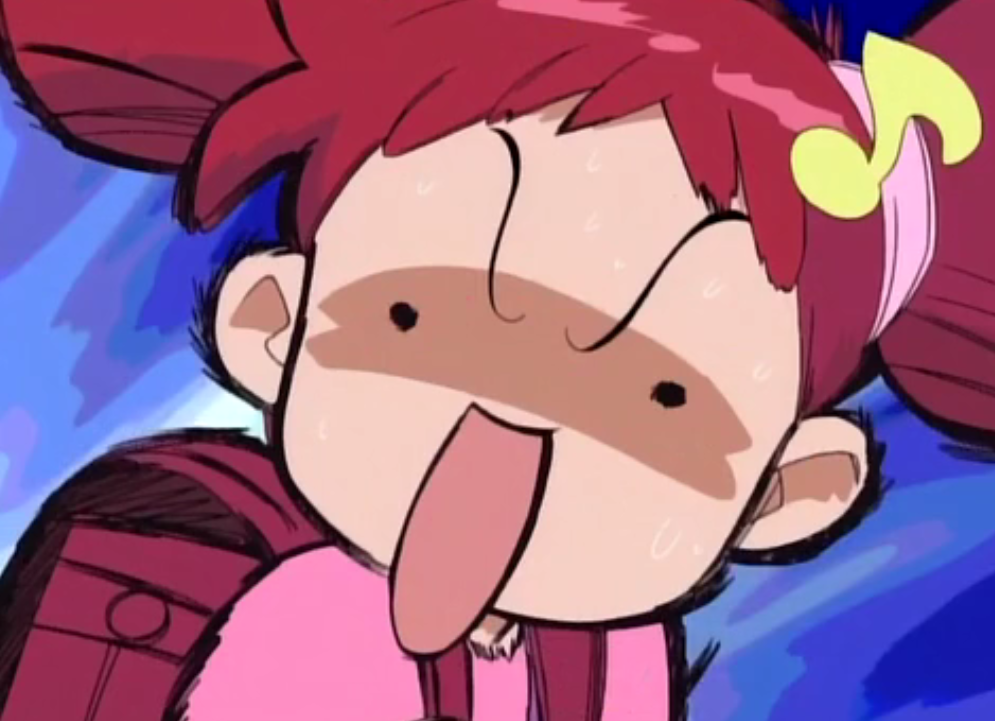 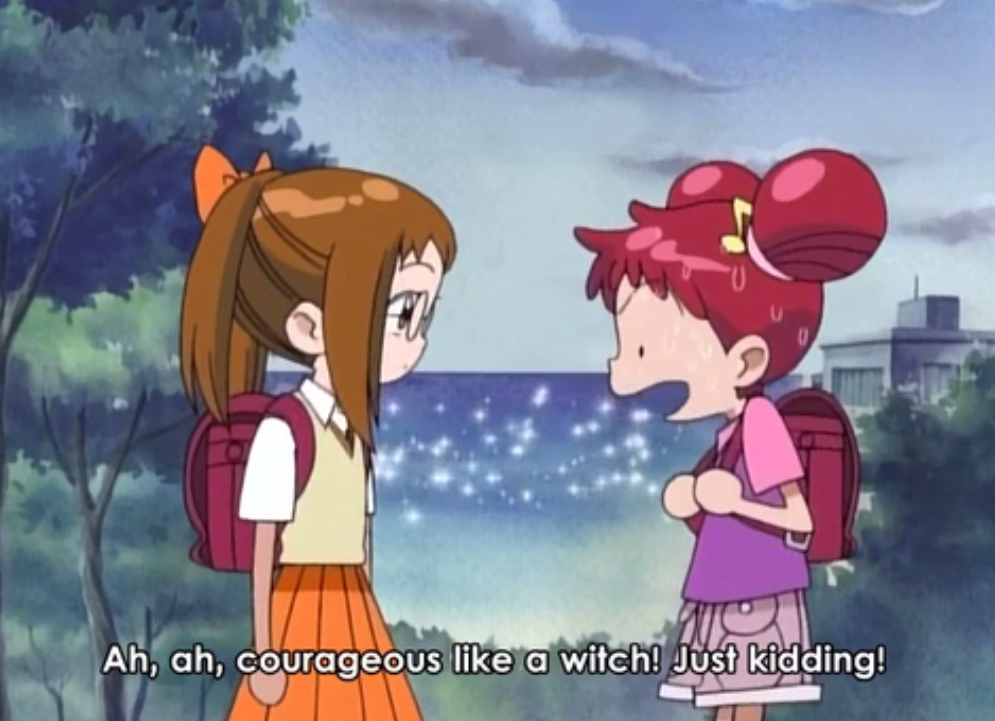 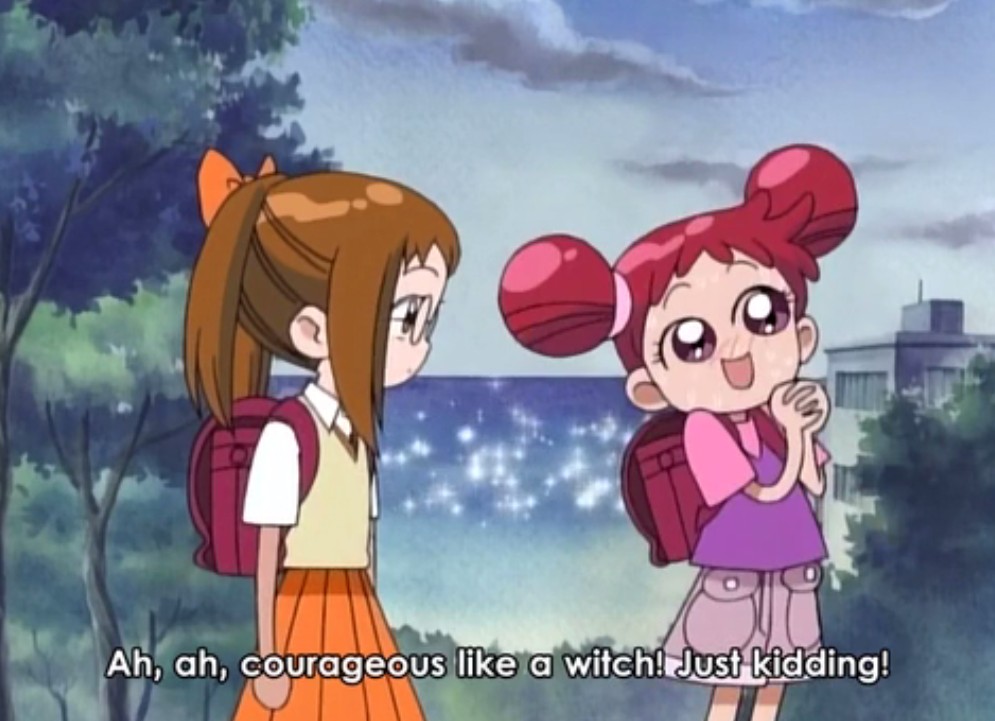 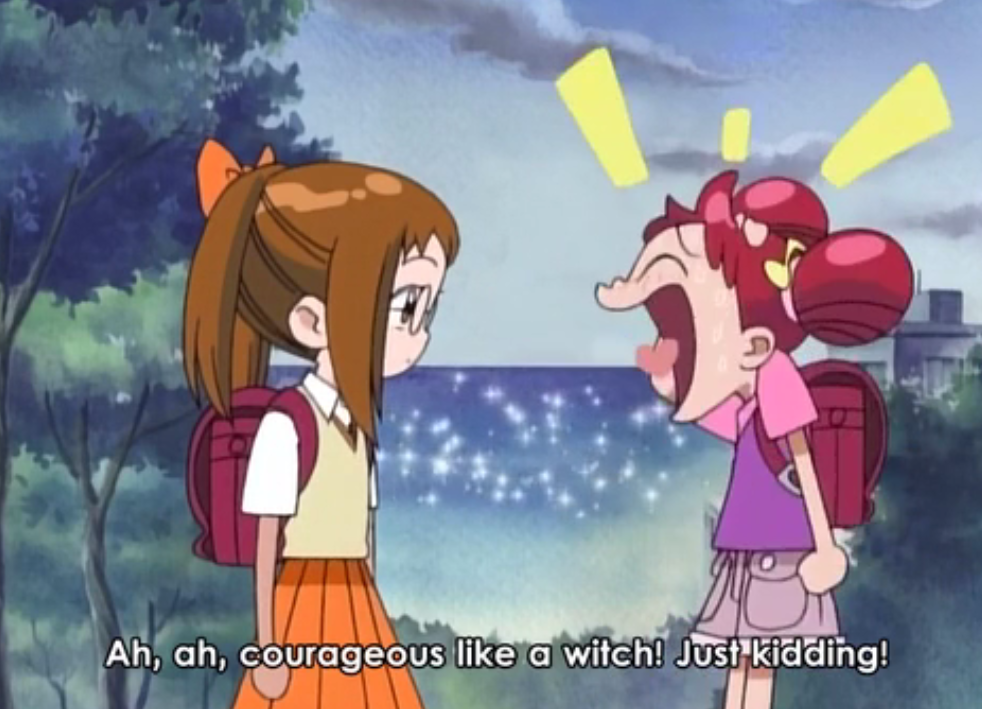 Doremi’s actually more rude than Dorie is in the next part. It’s clear that Hazuki is upset and depressed about her life right now. When she’s trying to explain it, Doremi says, literally, that it doesn’t matter and that she’s the world’s unhappiest pretty girl, but if she were Hazuki she’d be lucky and happy.

In the dub, Reanne says she might have a point that her life seems good, but sometimes she wishes she were someone else. Dorie then goes off saying she’d want to be like that shampoo commercial where she smells the shampoo and then rides off into the rainforest on a unicorn….That actually sounds like an awesome commercial.

Text is replaced again to make the books say…oddly enough ‘Reading.’…”Kids, these are your reading books.” “…..As opposed to non-reading books?” “DO YOU WANT DETENTION!?” 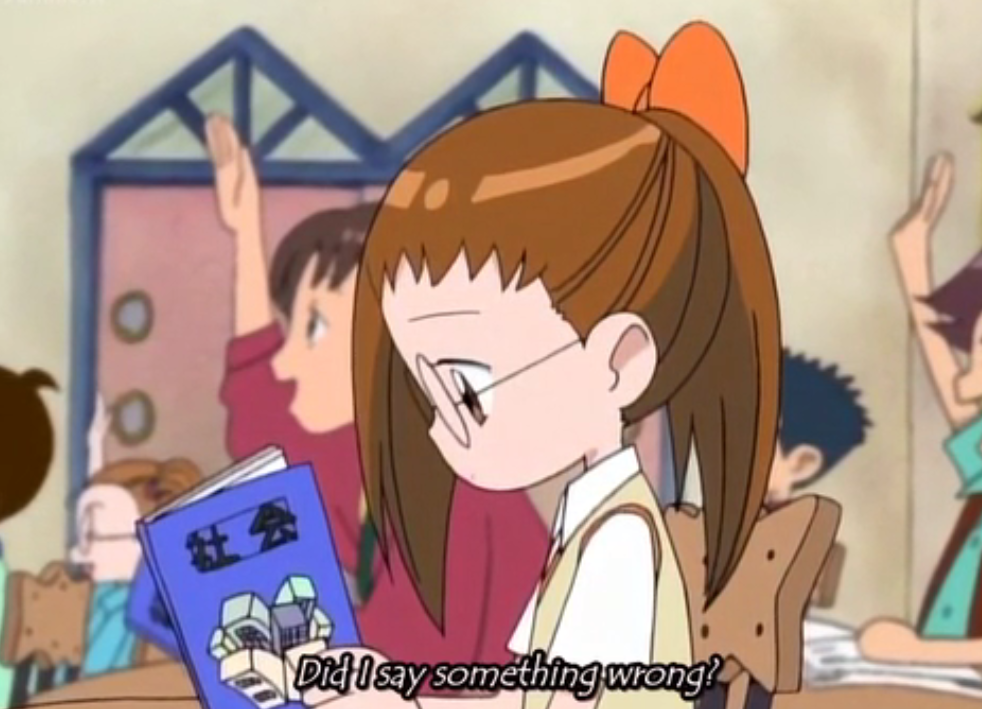 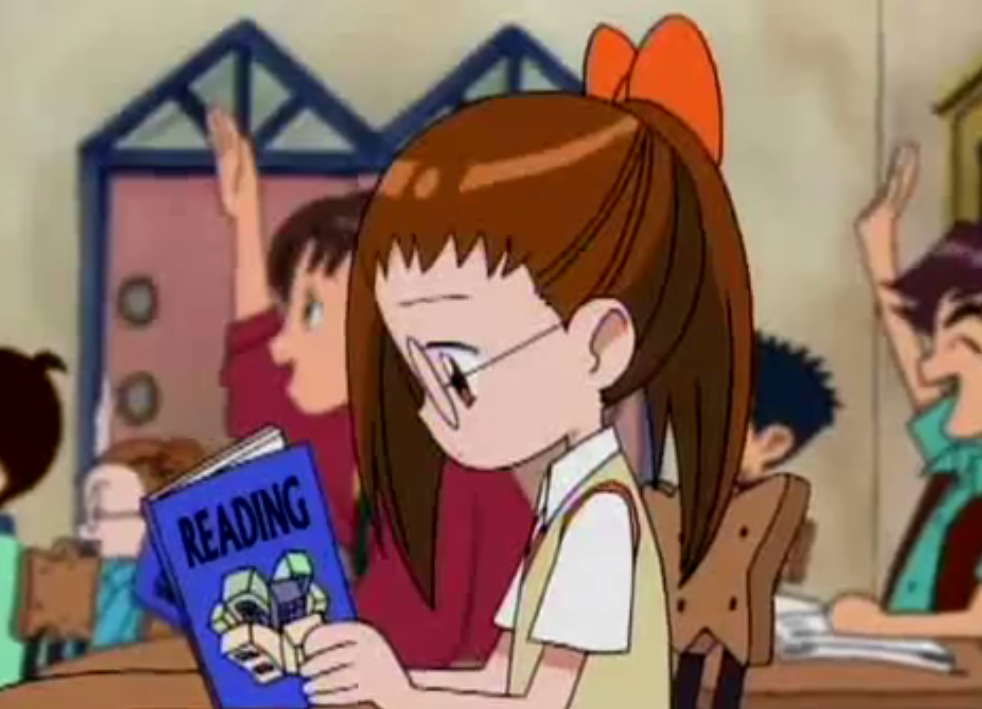 Originally, Doremi apologizes for what she said earlier, and Hazuki says she wishes Doremi hadn’t found out about her problems that way and also apologizes. In the dub, Dorie tells Reanne that her friendship is important to her and that she wants her to know that she can always tell her anything. Reanne says that no one’s never said such a nice thing to her before and says Dorie’s a great friend.

I thank God above that 4Kids only dubbed two magical girl anime in their existence because between Mew Mew Power in my face and Faladeiladongding now I am a witchling, I’m already resisting the urge to be go on a rampage.

Hazuki is happy she’s finally Doremi whereas Reanne is happy she’s ‘someone else’, which is a lot sadder when you think about it. Being envious of someone and despising your life so much that you’d just wish to be anyone else are two very different things.

Aw, 4Kids, you were doing so well. There’s a sign on the trash bins that says ‘Trash’ in Japanese. Instead of changing it like they’ve been doing, they painted away not only the word but also all of the little designs on the sign and the bins. They replace them with typical recycling symbols. 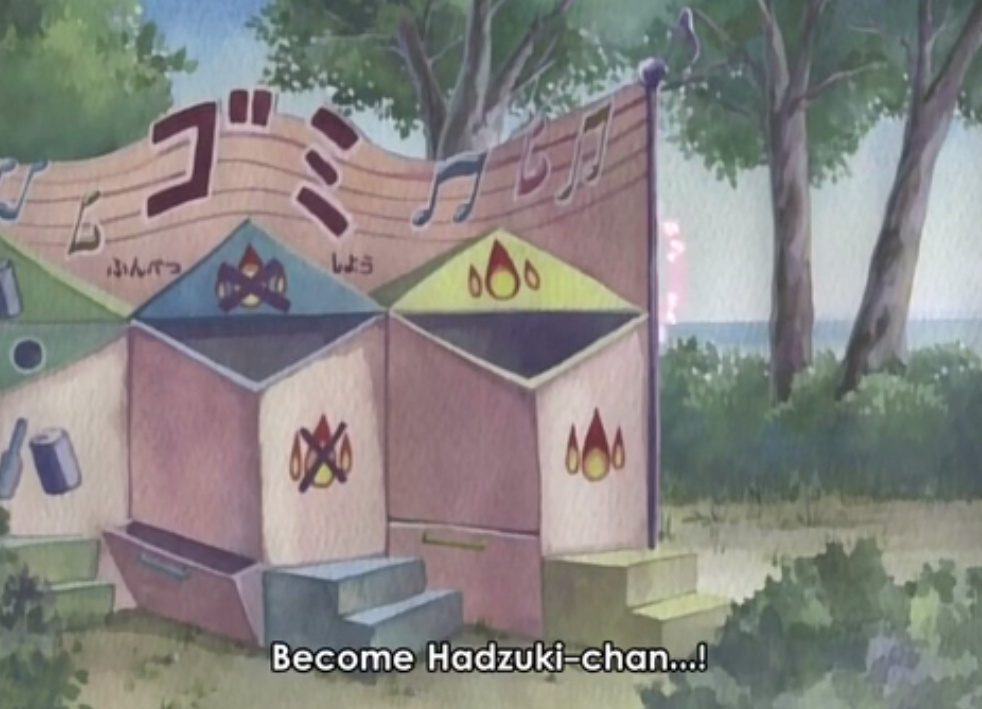 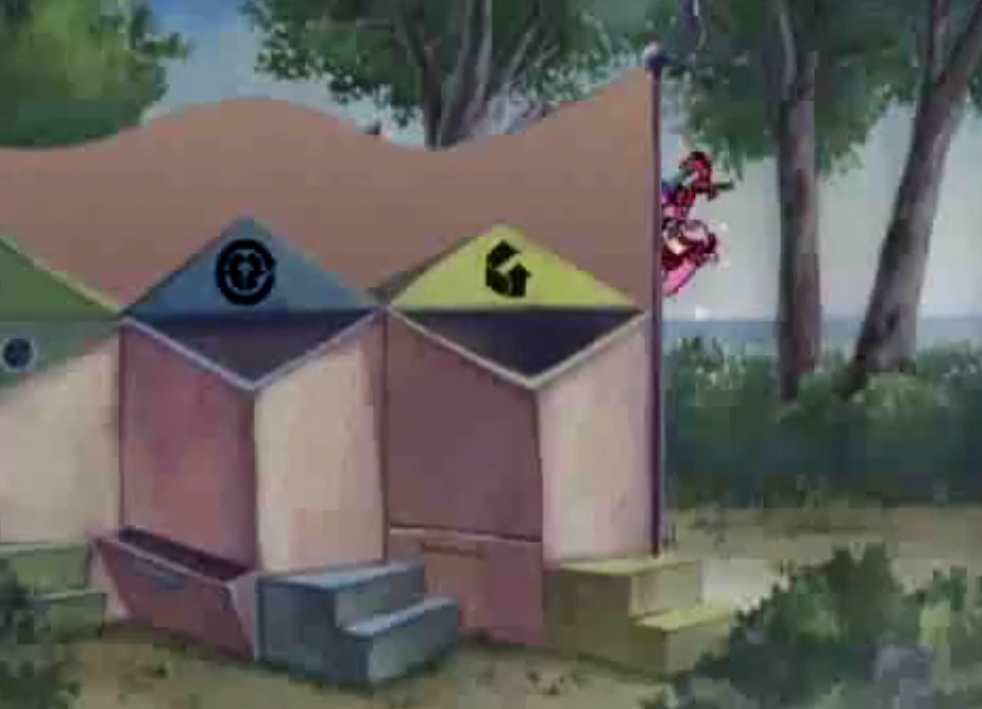 The dub doesn’t include the parts about saying that witches really exist and also adds that Dorie jokes with Reanne about calling her sister ‘bratface’. In addition, while they keep in the part about asking how to address their parents, Dorie doesn’t ask Reanne for the same information whereas Doremi does. 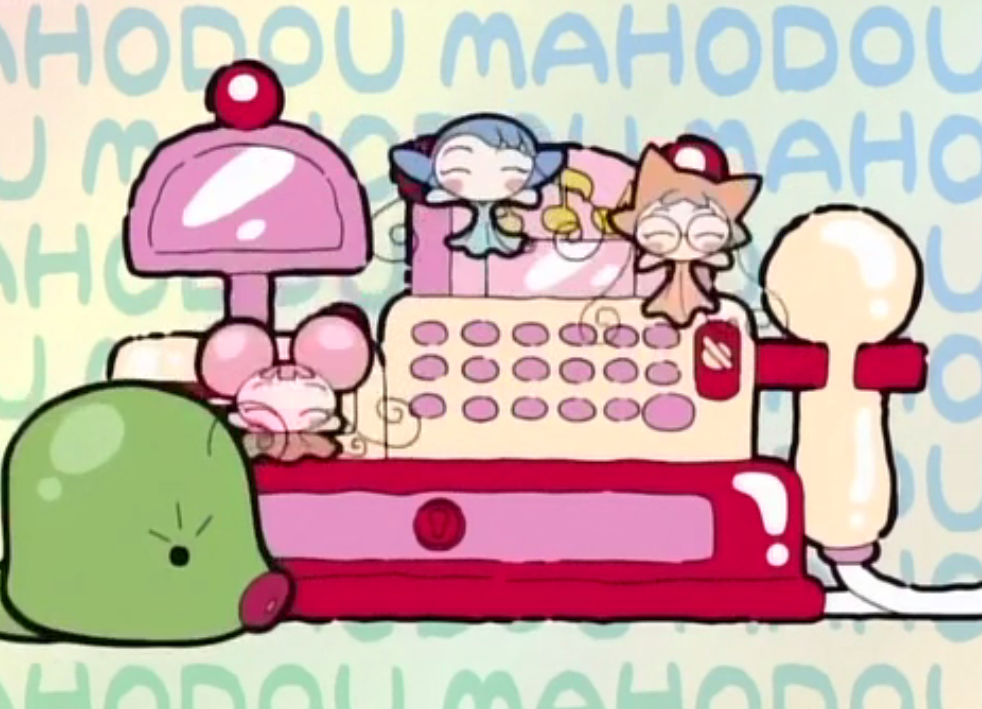 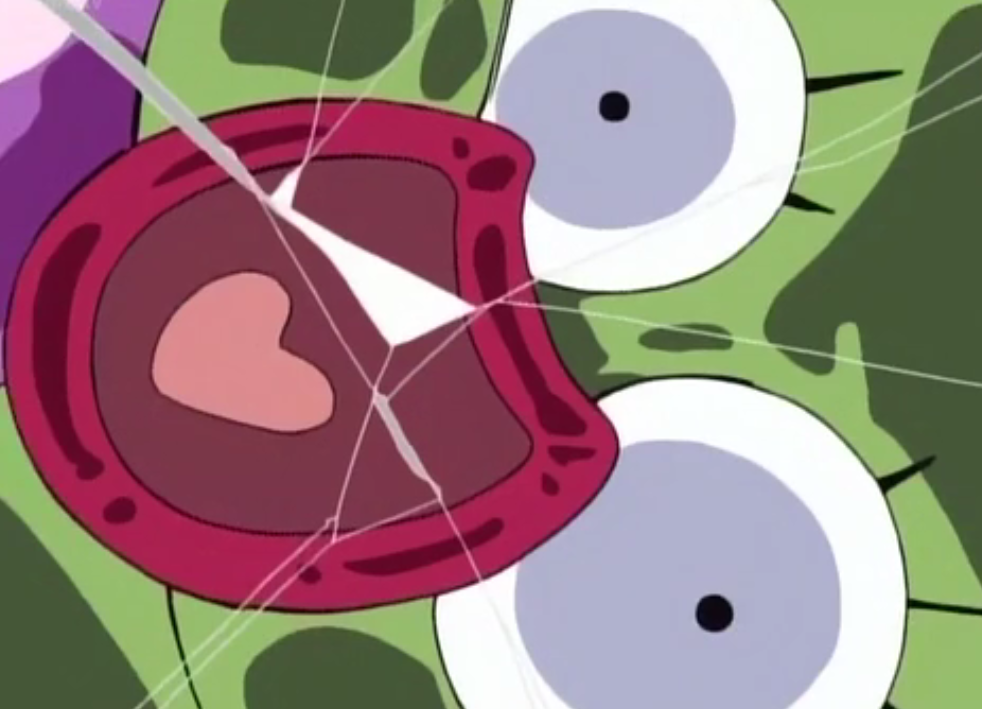 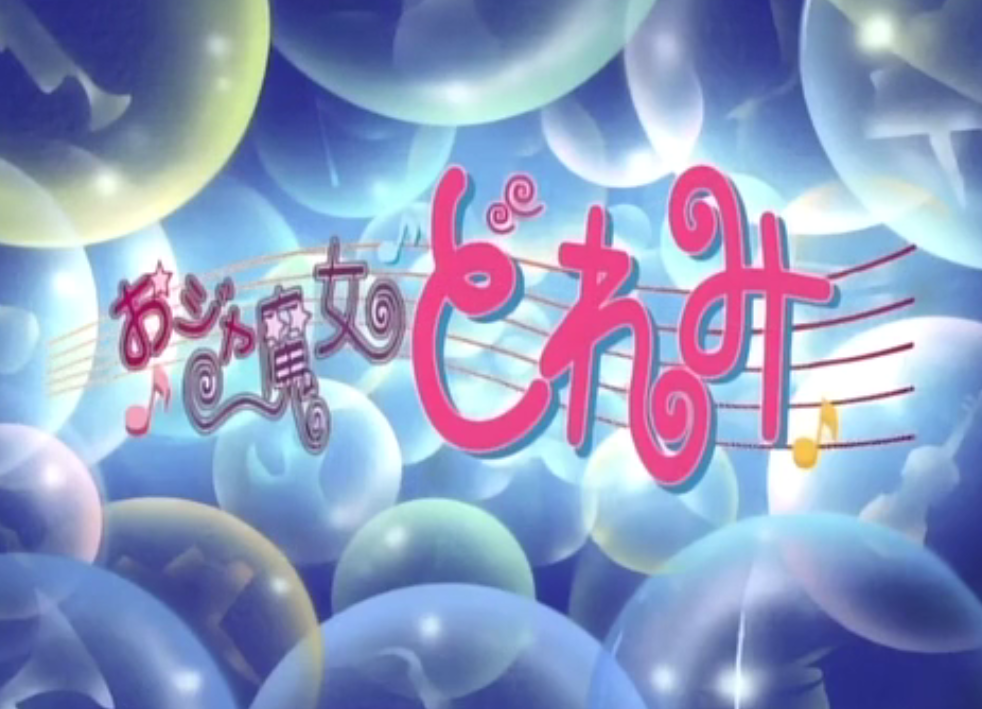 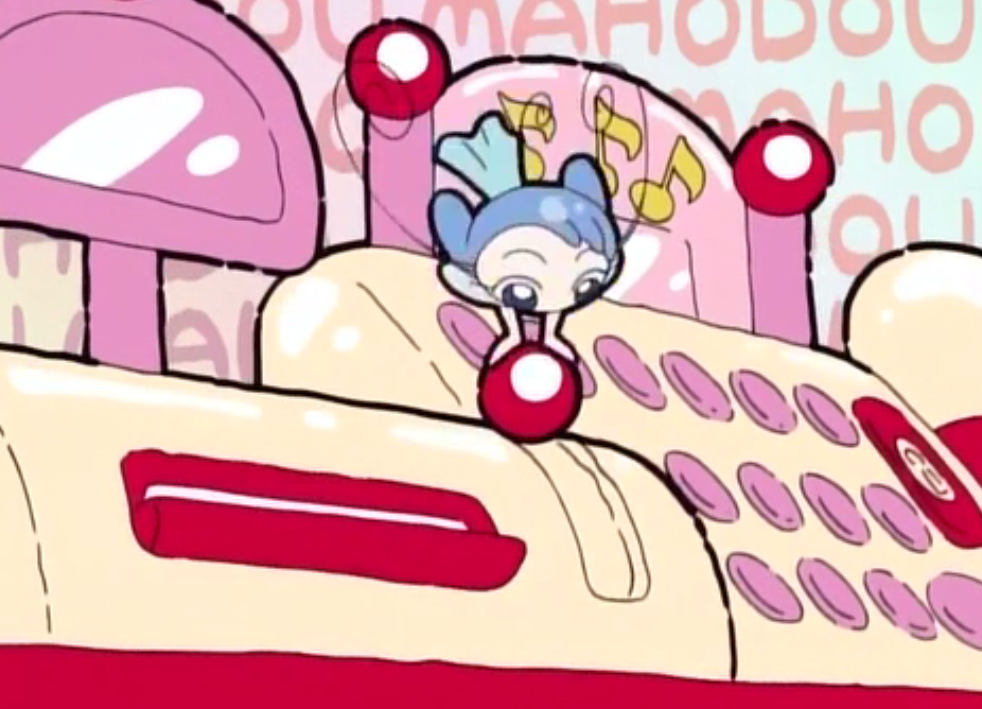 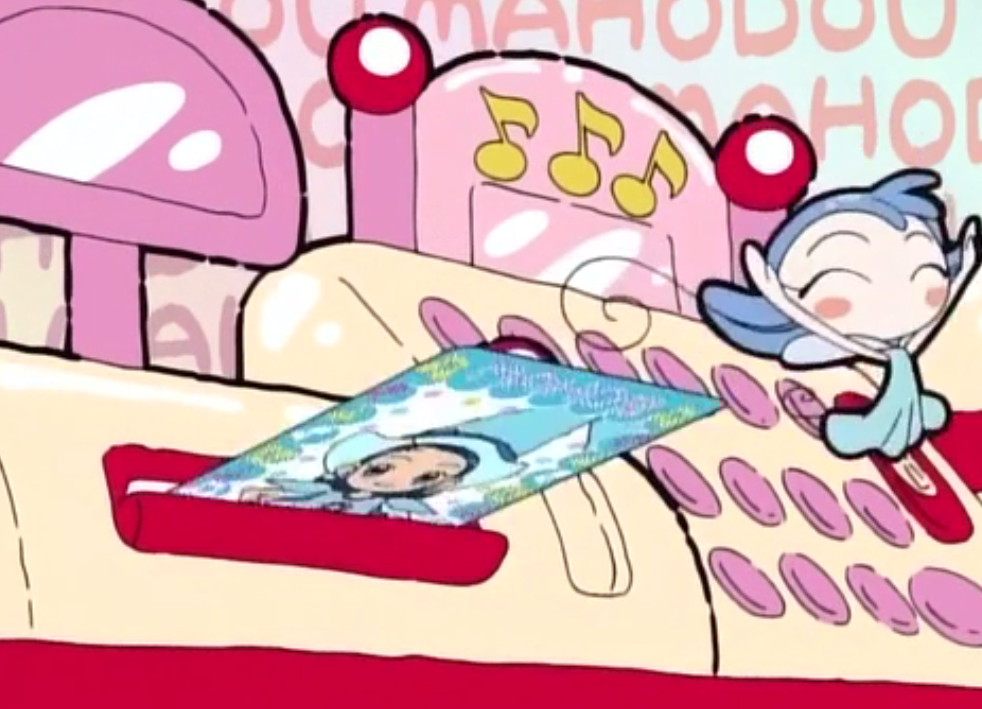 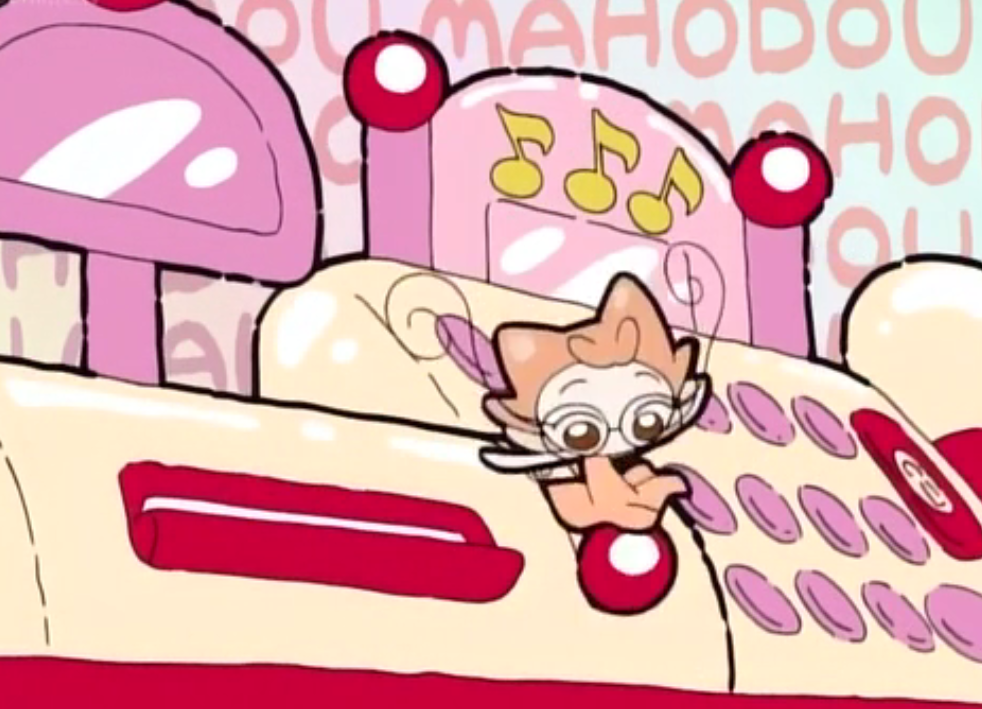 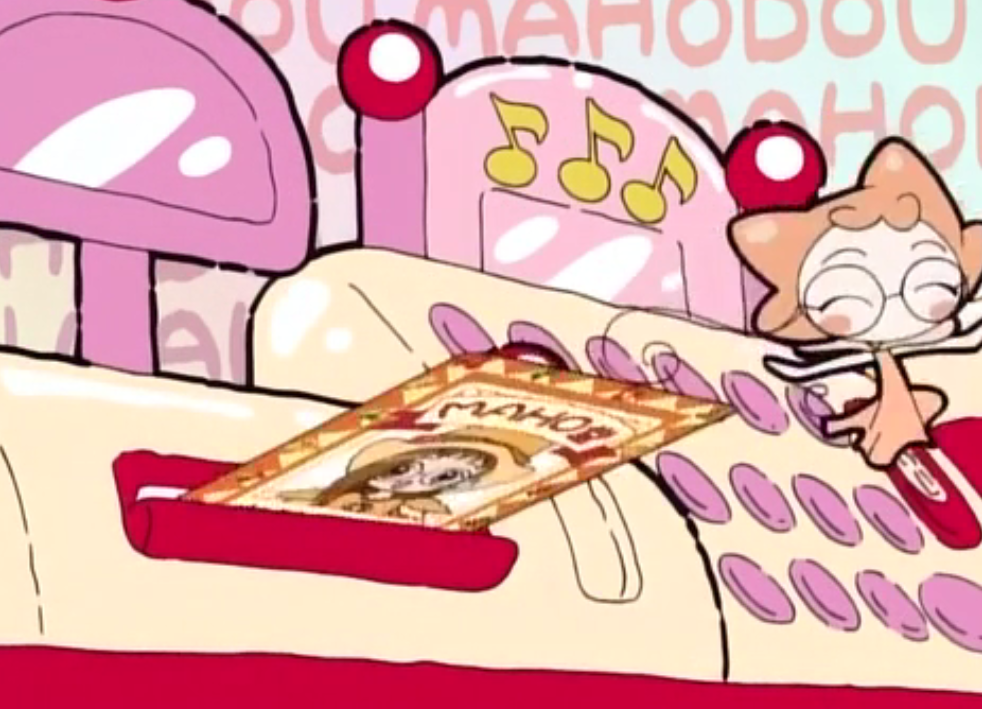 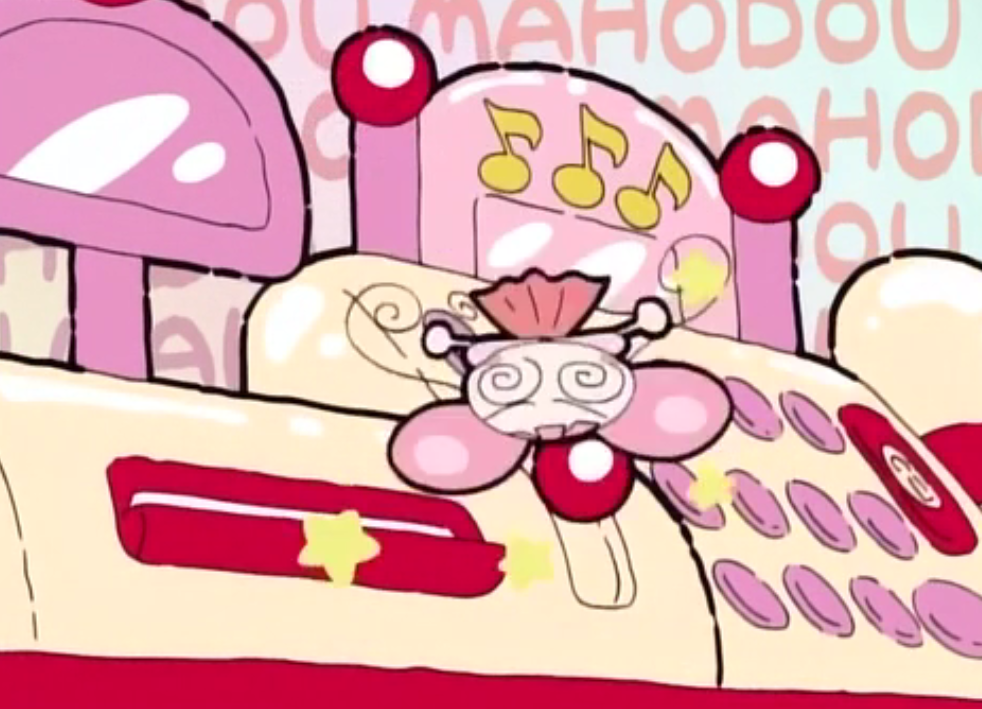 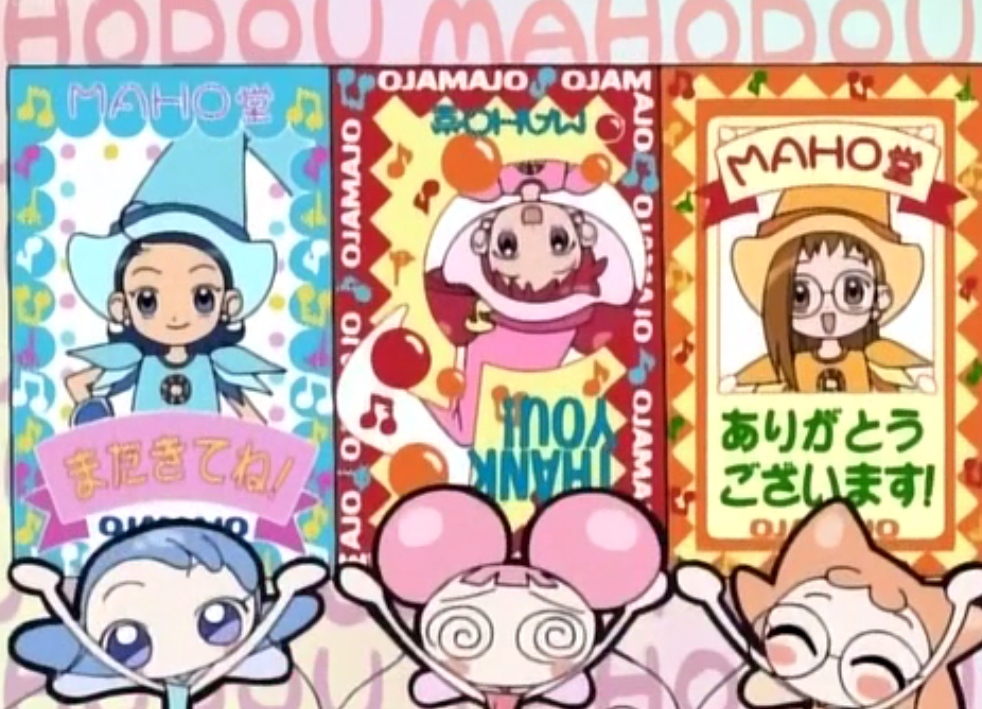 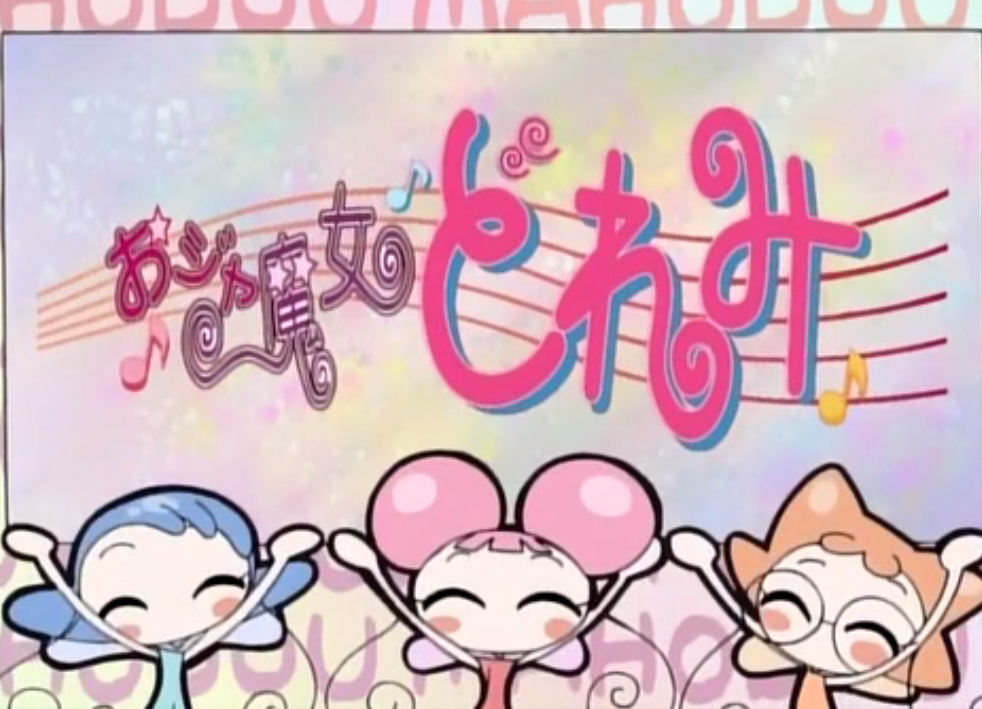 Pop isn’t singing a girly pop (hehe) song when Hazuki comes in like Caitlyn is. Also, Pop kindly greets Hazuki (Doremi) while Caitlyn says snootily “What are YOU staring at?”

There’s no way to keep this in here besides being uncharacteristically loyal to the source material, but Hazuki keeps calling Pop, Pop-chan, which she seems to despise. It causes her to continuously freak out, and she refers to her prior conversation with the actual Doremi by saying “If you don’t want one of my boyfriends, that’s fine. But don’t refer to me by that suffix!”

In the dub, she’s freaking out about how nice Reanne is being to her. She then says the complete opposite of the last line by saying this means Dorie actually wants one of her boyfriends now, but it will cost her.

They edit out a shot of Hazuki freaking out when Pop says she’s acting weird. 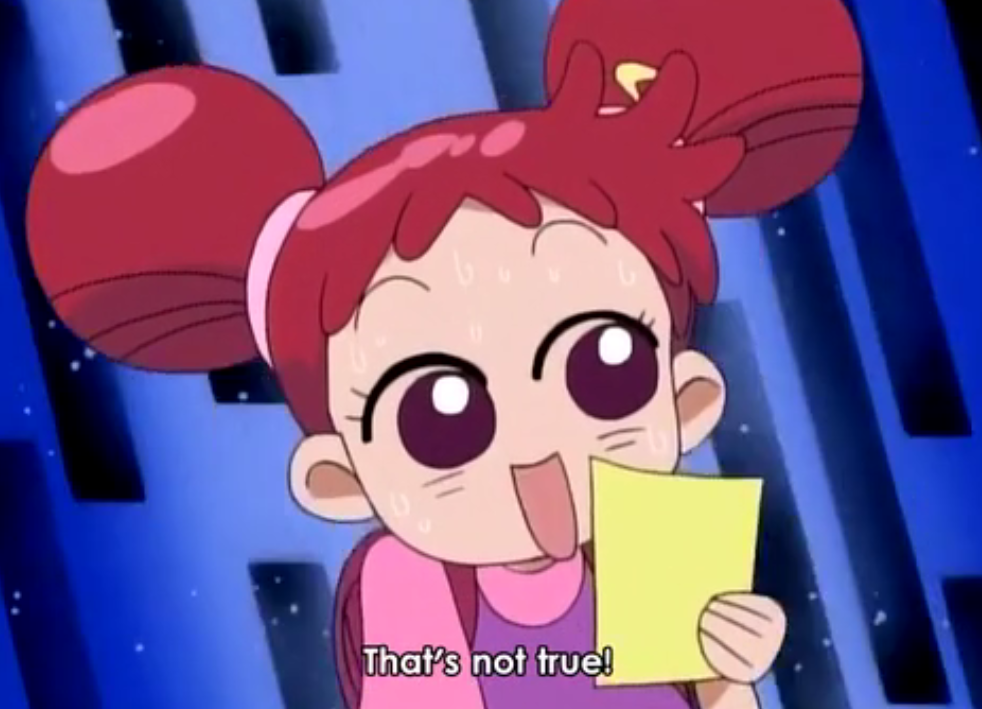 Also, they cut the next shot of Pop down to just show her with big round eyes.

Doremi’s mom is nicer and just asks Pop what she wants whereas Dorie’s mom yells that she’s busy.

Doremi clamors over calling Hazuki’s mom ‘mama’ whereas Dorie’s clamoring over saying ‘ma’am’ because god knows she never could’ve said that when she was Dorie.

The one thing I always find weird about these ‘switching bodies’ episodes of anything is when the characters change clothes or are the other person for extended periods of time. Technically, in this case, the girls are just magically transformed to look exactly like each other, but it’s still an exact replica of Doremi’s and Hazuki’s bodies. You’d have to change clothes, take showers, do….other things, in someone else’s body. That’s just creepy.

Hazuki’s mom replies to Doremi’s request of steak by mentioning that she had it yesterday. Doremi responds by saying that today’s another day and that’s just what she wants.

In the dub, they keep the mention of steak but they change her mom’s line to saying Reanne’s a vegetarian. Dorie responds by saying she’s not one anymore and she needs protein.

Hazuki’s mom responds by saying she can have whatever she wants, and Doremi thanks her. Reanne’s mom asks her about her argument about soy protein, and Dorie just says to forget about it.

Hazuki’s mom goes off to make the reservations. In the dub, she goes off to pick more dresses.

Hazuki’s teacher doesn’t tell her what song to play, and Doremi asks when she gets steak. Hazuki’s mom laughs at the fact that she thought she’d get dinner right then. In the dub, Reanne’s teacher tells her to play Paco Bell. Dorie asks what Paco Bell is. Reanne’s mom says she’s been practicing it all week and to kindly play it for them.

Doremi’s dad shows Hazuki a catalog about lures when Doremi’s mom bursts in to tell them to stop what they’re doing and come eat dinner. Doremi’s dad yells about how he’s a serious fly fisher, and Doremi’s mom strikes back by saying it’s awful because she’s the one who has to gut and clean them. This eventually leads to a comedic, note COMEDIC, physical fight. Exactly like the ones you’d see in Western cartoons with the doofy sound effects and cloud of smoke.

In the dub, Dorie’s mom tells him to stop talking to Reanne about that stuff, and Dorie’s dad interrupts her by saying he’s a very serious fly fishing writer. Dorie’ mom strikes back by saying he’s barely sold anything, and the entire scene with the extended comedic fight and the arguing is removed as we cut straight to Hazuki’s reaction shot, which is also edited to be rid of the dust clouds.

I get it, ya know, domestic violence and whatnot, but come on, they couldn’t have made it anymore comically unserious if they put a giant banner on screen that said ‘THIS IS A JOKE! ONLY A COMPLETE BRAINDEAD IDIOT WOULD THINK DOMESTIC VIOLENCE IS OKAY!” 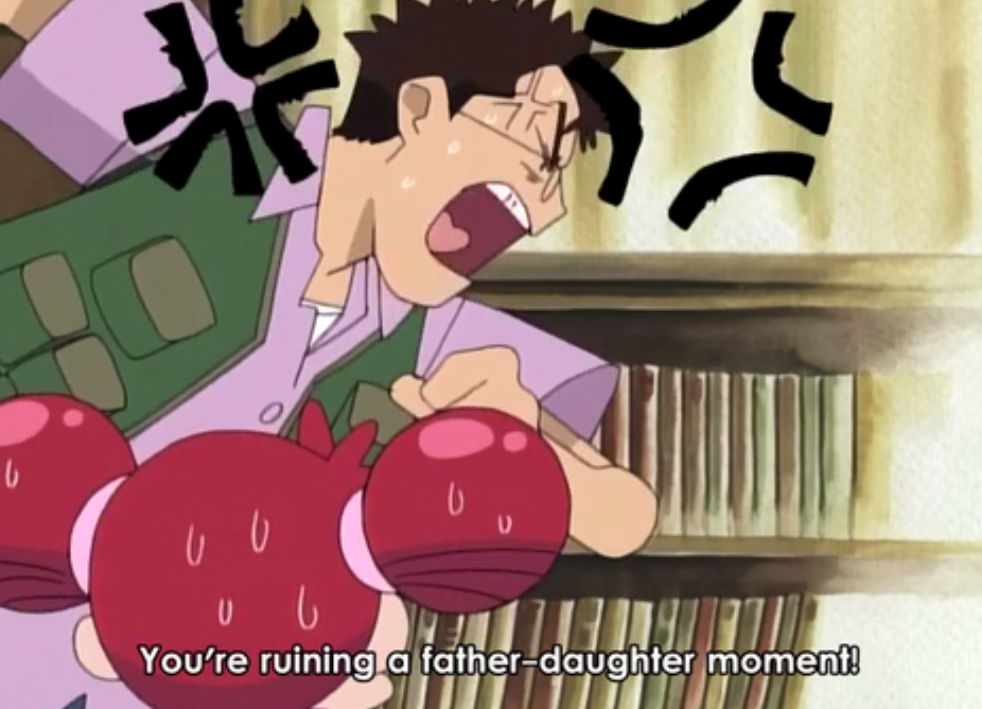 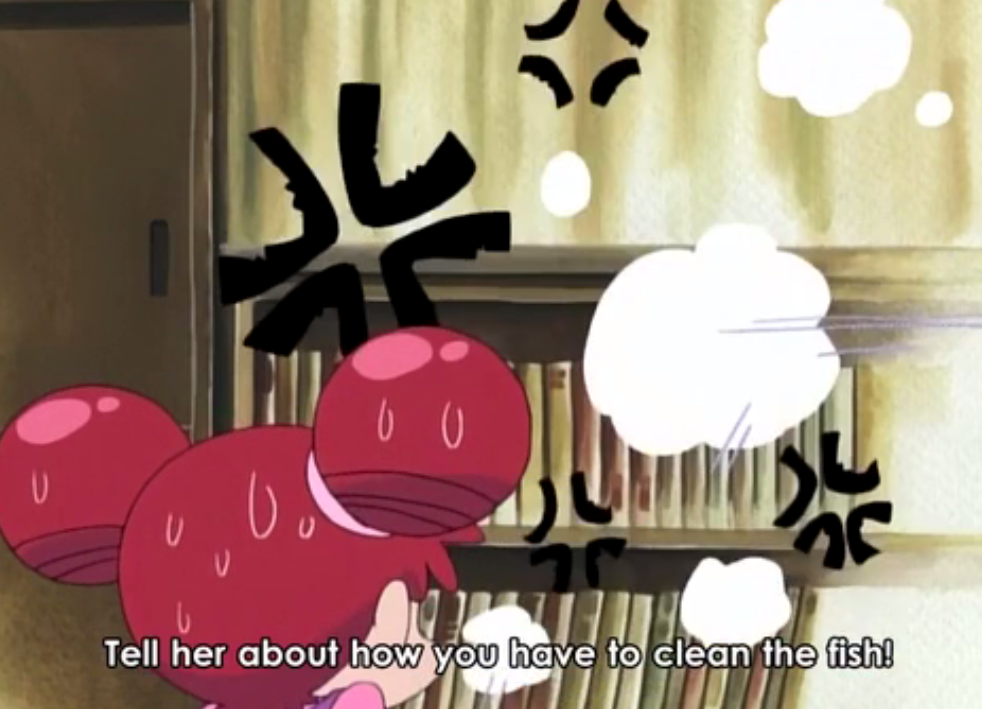 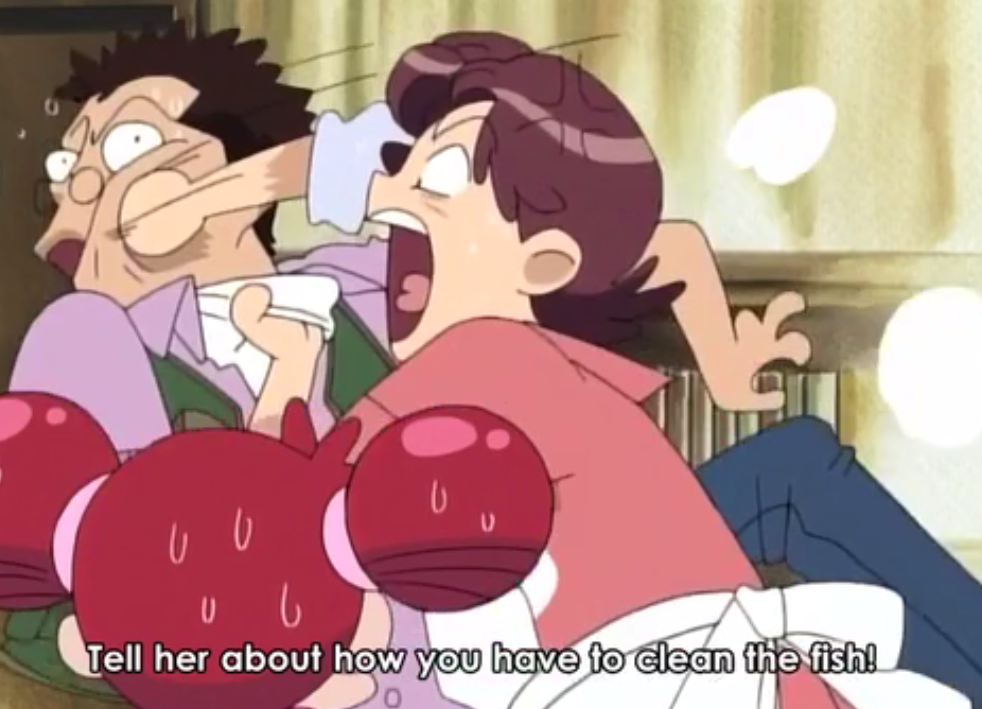 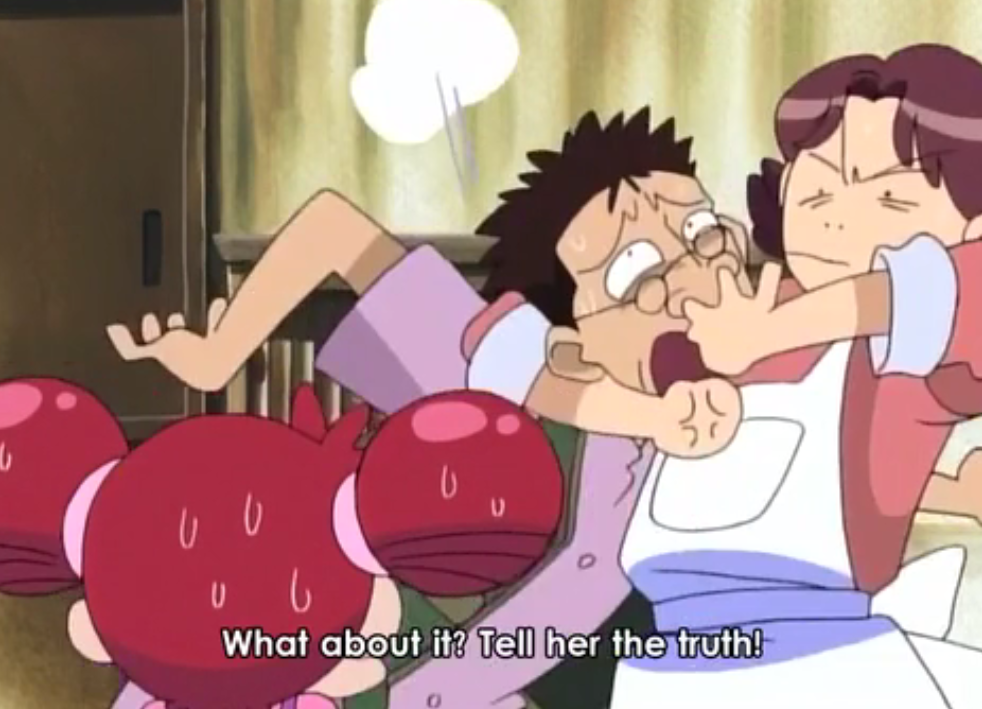 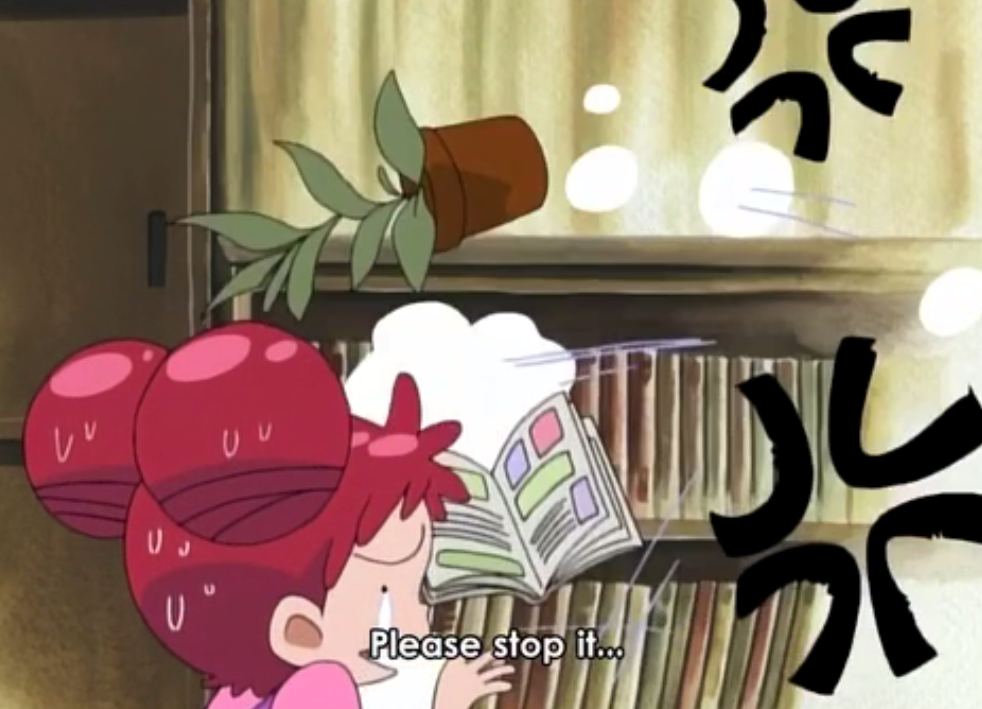 Hazuki wonders how they can be so civil and friendly to one another at dinner after having such a bad fight. Due to the previous completely unneeded line change, this is changed to Reanne not being able to eat the steak dinner since she’s a vegetarian. I’m really just hoping sometime in the future Hazuki will eat meat and 4Kids will either completely miss it or edit it out.

This line is changed, but what they did do was funny. Doremi’s mom says she knew Doremi was acting weird so she bought the steak to help cheer her up. In the dub, this line is omitted and instead we get this.

Dad: “Did you check her tongue?”

I nearly spit out my drink this was so funny. Kudos, 4Kids. Also, you can tell Dan Green has a lot of fun as the dad. The parents have a good back and forth in both versions. Usually anyway.

Hazuki says her parents will be really worried about her whereabouts if they find Doremi in her bed instead of her. In the dub, Reanne says, if they find Dorie there, they’ll be confused and send her to the hospital.

Hazuki talks about how bad she feels for deceiving Doremi’s parents and how she made them worry about her since she wasn’t acting like Doremi. In the dub, Reanne talks about how much she missed her family while she was with Dorie’s family.

The next scene is the same only the dub adds in the mention of her not eating it because she’s a vegetarian. It’s really important that we drill this into your head for no reason.

They cut the final scene out, which is Doremi learning that the steak that was kept from dinner last night was eaten sometime, somehow between Hazuki going to bed and Doremi returning late at night. Her family rejoices in her being back to normal, but Doremi laments at her bad luck.

Next episode we’re introduced to Aiko who seems to be the last girl in their magical girl group who will get powers – at least during this series.