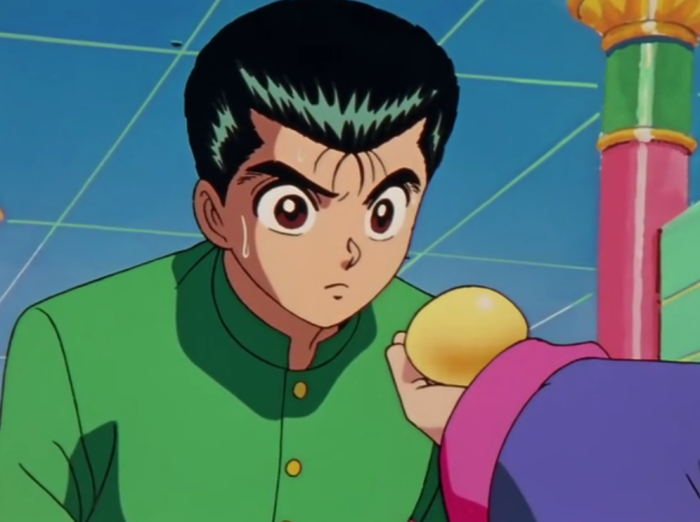 Plot: Yusuke’s quest to return to life is now underway, and Botan ferries him to the spirit world to get him started. While the spirit world seems vast and intimidating, Yusuke finds that the main section is a giant bureaucracy of ogres. Botan claims he’s going to meet King Yama to discuss his ordeal, but instead he meets the infantile-looking Koenma, son of King Yama.

Koenma explains to Yusuke that his ordeal is a test of his character. He presents Yusuke with a golden spirit egg and tells him that it will eventually hatch into a spirit beast after it has slowly consumed enough of Yusuke’s spirit energy.

If he is truly of poor character, the beast that emerges will be a horrific creature that will eat Yusuke’s soul, causing him to be lost forever. If he is truly a good person, the beast will reflect this and will protect him and guide him back to his body.

Yusuke accepts the task, but there’s a hitch. While Koenma has put a pulse back in Yusuke’s body, the funeral and cremation are soon. If Yusuke’s body is destroyed before his ordeal is over, he will never be able to return to life.

He has to find some way to communicate with his loved ones in order to stop the cremation, so Botan tells him that he can communicate with people in their dreams since people are more strongly connected to the spirit world when they’re sleeping.

Yusuke’s mother has been staying awake in a drunken stupor doing nothing but ranting to Yusuke’s body, so he decides to visit Keiko. While she fully believes he’s there and he conveys his message well enough, Keiko can’t bring herself to tell Yusuke’s mom about the dream due to her own odd dreams about him.

Botan offers another option – possession. He can take control of another person’s body for one hour and tell Keiko outright about what’s happening, but the hitch is that it needs to be someone he knew in life and someone who is particularly attuned to the spirit world. Yusuke claims he has no options, but Botan reveals that Kuwabara actually has a strange connection to the supernatural.

He agrees to the possession, but finds his time is quickly dwindling as he keeps bumping into people who have a bone to pick with Kuwabara.

He manages to find Keiko just before time runs out, and she instantly believes he is who he says he is. He manages to relay his message and embrace Keiko before leaving Kuwabara’s body. Keiko runs to Yusuke’s house and finds Atsuko in awe as she finds his body is regaining its color and warmth. With Keiko and Atsuko ensuring Yusuke’s body’s safety and the little spirit egg glowing in his hand, Yusuke has to wait to find out his true fate.

Breakdown: Another good episode, this one establishes a bunch of important things such as the spirit world, Koenma, Yusuke’s revival trials and Kuwabara’s spiritual powers. It’s also a touching episode for Yusuke and Keiko as you can really see how much they both care for each other. Keiko’s line about knowing Yusuke because she knows how he moves and speaks so well is especially beautiful.

I don’t have much else to say about it except maybe one note. I remember watching this series so many times on both regular Cartoon Network and Adult Swim. The Cartoon Network/Toonami version had a bunch of obvious censorship, but I always thought that the Adult Swim version was uncut for the most part.

In both versions, I only remember Yusuke walking up to Keiko saying ‘Nice uniform!’ while the shot held on Keiko’s expression. However, the scene goes on to show Kuwabarsuke grabbing Keiko’s boobs and saying ‘They’re so squishy!’ If I’m remembering incorrectly, please tell me. Otherwise, Adult Swim thought adults couldn’t handle watching a girl get her boobs touched.

Yes, handle all that violence, gore and swearing, but we’ll shield your eyes from five seconds of clothed groping. Unless you’re groping a butt, in which case it’s okay. Right, Miroku?

Next Episode, Kuwabara is cinnamon roll and he deserves the world.