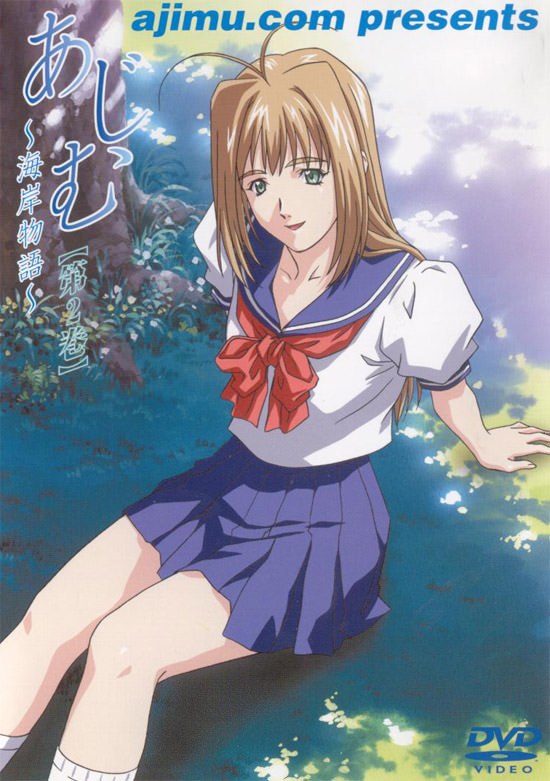 Breakdown: Narrator: “There once was an anime blogger named FiddleTwix. She watched anything from magical girl shows to gritty war dramas, shounen tournament fighters and psychological thrillers. Her watch list was insanely long and unorganized, but she was far too lazy to get any sort of rational system together, so she just watched whatever fell into her lap most of the time.”

FiddleTwix: “Oh boy, let’s see what fell into my lap today! Ajimu: ~Beach Story~, eh? Well, golly, I sure haven’t watched a romance in a while. It’s not usually my forte, but let’s see what’s up.”

Narrator: “Twix was used to seeing blasé and cliché plots before, but even this plot description threw her for a loop.”

“’One morning as he arrives at the train station on his way to school, he catches sight of a beautiful girl, Ajimu Yasuna, and immediately falls for her.’” Her voice grew louder and increasingly panicked. “Ssssssssssssssss nope. Nope. I don’t accept this. Nope.”

“’The two of them get to know each other and become friends, but he can’t confess his feelings and she is unsure of hers. As events and other people present obstacles for the potential couple to clear, their relationship begins to develop and their feelings become clear.’ There is no way.” She stated in a much calmer tone. “There is no way this anime is this cliché. This boring. This by-the-book. It can’t be. It just can’t.”

Narrator: “Twix had not even pressed ‘play’ yet on the first episode, but was so distraught by the description that she spent the next four hours praying to the anime gods that such a bland show could not exist. For its plot was so cliché even someone who has never seen anime could write that on the first try.”

Twix: “I am not one to quit before I even start……except on twenty or eighty things, but this anime will not best me before I even watch a frame. Maybe the writer was lazy or was just about to get off work and wanted to watch whatever he DVR’d at home.”

Narrator: “And so, Twix pressed play – determined to not let this description taint her view of a show that could possibly be quite enjoyable. The next half hour was filled with….”

Twix: “Gee willikers, it was bland, cliché, poorly written AND creepy all at once! Just when you think the world’s playing a big trick on you, it decides to punch you in the kidney instead. Boy howdy.”

Narrator: “Twix gnawed on her water bottle for a minute before starting the actual review, knowing she had wasted enough of the reader’s time in this fake storybook thing she liked to call a ‘joke’.”

I won’t waste much more of your time explaining why this show is bad.

In addition to the unsalted cracker of a plot, the actual story is insanely contrived and creepy. Hirosuke falls head over heels for a girl he sees at the train station named Ajimu. It’s love at first sight, and they never share a line of dialogue.

For days, he ogles her from afar on the train until he gets up the nerve to talk to her. But, uh oh, crazy anime-reality shenanigans! The train suddenly gets incredibly full and they’re smushed up against each other front to back. Some guy’s tennis racket pokes into her ass and she yells out that he’s a molester.

Shockingly, no one bats an eye, and more people are jammed into the train. Ajimu turns around because why not, and now the racket is poking into her crotch. One swift push later, Hirosuke is “accidentally” kissing Ajimu.

I say “accidentally” because there’s no way an accidental kiss could’ve occurred the way they presented it. He is substantially taller than her. He has to duck down in order to kiss her and nothing caused him to do that. Not to mention, even if someone did bump him, he lingered for about 20 seconds.

I don’t know why, but it took her until she was about to leave the train to finally slap him silly.

Hirosuke then keeps pestering her and following her trying to clear up the misunderstanding, but she doesn’t want to hear it. Well, no shit. The best way to convince someone that you’re not a molester is not by stalking them.

He gets fed up and calls her stubborn, admits he fell in love with her at first sight, (excuse me, he specifically says her figure was one of the main reasons he liked her so much, which makes sense because these two haven’t had a full conversation nearly 7/8 into the episode) and got embarrassed by the misunderstanding on the train.

They’re about to patch things up when he topples on top of her because he fainted due to a cold (She had it first – it doesn’t matter. Also, nice to know fainting is an epidemic with men in Japan too) She remembers all the good times they had together like him standing in a hallway and him pestering her. She’s about to kiss him while he lays in a clinic bed, I guess, and that’s it.

Also, she’s a singer because we need to check off that cliché. Oh, but let’s make her unique by having her play the ukulele! Ukulele’s a beach thing so it’s justified, hooray!

Add in the typical perv best friend for good measure, too.

Just, why? Why? This is a four episode long series, and I usually go the extra mile and just grin and bear it for series so short, but I just don’t want to go any further. It is nearly any anime love story executed with absolutely no effort in practically any regard.

Hirosuke doesn’t even like her as a person because he doesn’t know her as a person. He just thinks she’s hot and has a nice singing voice…….Oh my God, he’s somehow a less interesting Eric from The Little Mermaid.

The music is, admittedly, a slight breath of fresh air given the ukulele, but that’s not much solace.

This series, as I mentioned, is a very short four episodes long with each episode clocking in at around 28 minutes. However, romance lovers probably won’t enjoy it for the vapid and somewhat creepy coupling, and fanservice hounds won’t get into it much because the fanservice is low-key and kept fairly minimum. There’s way better stuff out there for both aspects, guys. Move on.

Narrator: “And so, Twix closed out her less than satisfying review on this completely unsatisfying anime, hoping she had saved at least one person from wasting their time on it. With a small smile and a click of the save button, she wondered if anyone had figured out that she had been the narrator the whole time.”