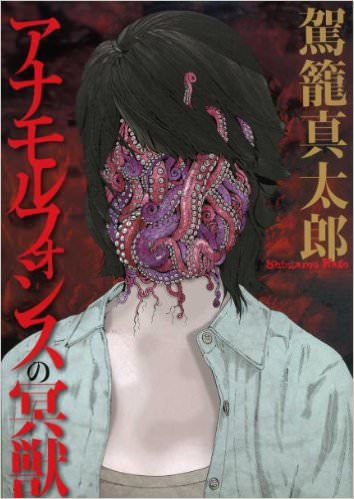 Plot: There’s a new game show that is supposedly causing real deaths. Contestants are invited to spend 48 hours in a building that is reported to be haunted by the spirit of an actor who died on set due to a tragic accident. His spirit appears to others in the form of a giant monster in the same design as a monster costume he was wearing at the time of his death. Is there really a spirit behind the scenes or is it all just camera tricks?

…..Oh and the second half of the manga is pure mind-fuckery in the form of numerous short stories.

…….I can’t remember what happiness feels like….I can taste my thoughts…..I can hear colors…….what the unholy hell….did I just read?

I started reading Anamorphosis no Meijuu around Halloween last year, but never got around to finishing it for Animating Halloween. Well, I picked it back up and…..read the words….and….looked at the pictures….and comprehended….some….things. Mostly I just feel dirty.

You might be thinking I’m overreacting a lot for a manga that I actually think is really good, but you have understand my reasoning with this.

This manga throws you for one hell of a loop. For one half of the manga, you’re reading a linear plotline about the above story. It’s intriguing, has a lot of great twists and ends on a confusing, but very creative and satisfactory note.

The second half of the manga is made up of short stories, which only take up about eight to ten pages each. Every short story is incredibly graphic in nearly every way. Sexual content, nudity, rape, bestiality, lots of gore, cannibalism, and just complete mind-fuckery.

To give you an idea, I will summarize each plot in one sentence. Spoilers.

Rainy Girl: A girl who is cursed to bring rain wherever she goes, indoors or out, is kidnapped by a man who introduces her to a man with the same powers who rapes her over and over until they breed an army of rain-producing babies.

Small Present: A couple keeps getting leftovers given to them by their neighbor, and they keep eating them until it’s revealed that the neighbor is a serial killer who targets children, chops them up, and cooks them into meals.

Hikikomori: A girl investigates why all of the students in her school are shut-ins, only to find that all of them are insanely fat monsters who are so large they can have sex with each other over their balconies without moving from their bedrooms.

Behind: A girl has a surgical instrument left in her, and after it’s removed everyone starts finding their lost junk in her stomach cavity.

Previous Life: A girl and a spiritualist make a business out of turning people into various animals and occupations by telling their past lives to overhunt the specified animal or person. This is an extra sentence, but the spiritualist rapes his dog for absolutely no reason in this story.

Salesman: A girl cannot seem to save anyone attempting to commit suicide by jumping since she has the spirit of a sumo wrestler with her that keeps pushing these people, resulting in their deaths.

Changes: A girl wakes up one day and finds her nipple has been replaced with a mouth.

Weightlessness: Why the fuck is there an easily accessible button to open a window on a space station?

If I lead you to believe any of these aren’t that crazy, I am sorry. It is…trippy. It’s certainly an experience. I’m not sure what kind of experience, but it is one.

There are several positives that I can lend this manga. Despite shading issues and some craggy lines, the artwork is disgustingly detailed and done in a more realistic style to up the gross-out factor. If you’re going to do this type of story, you really need the artwork to back it up. While I think it could be polished more, it definitely gets the job done.

If anything, these stories are all very creative…..fucked up beyond belief sometimes, but very creative. This manga will never steer you into tropes or leave you with a feeling of predictability. It’s wondering if the turns you took ripped a part of your soul away that pays for that luxury.

Finally, this manga is, admittedly, downright entertaining, purely because of how insane and ridiculous it is. There are many parts that are hard to sit through, certain pages that are damn near nauseating, but I found myself oddly intrigued by how bat-shit this manga kept proving to be. I’m almost disappointed in the ending because it’s by far the most benign story.

If you have a stomach for extreme content and are, for some reason, intrigued by this manga after everything I’ve told you, by all means, give it a shot. It will be a roller coaster ride that will leave you with some bruising and mental trauma, but it’s definitely a ride.

If you’re not ready to fully bite the bullet, though, just read the first half of the manga. The content in that story really isn’t too bad and the story is more toned down, but still well-written and interesting.

If you’re squeamish or have any of that stuff called ‘innocence’, please run far away.

Additional Information and Notes: Anamorphosis no Meijuu was written and drawn by Shintaro Kago.

Recommended Audience: About as graphic as you can get. Very detailed depictions of sex (genitalia included), rape, possible statutory rape, bestiality, birth, cannibalism, extreme gore including children and babies, swearing – you name it, they probably have it. 18+

One thought on “Anamorphosis no Meijuu (Manga) Review”