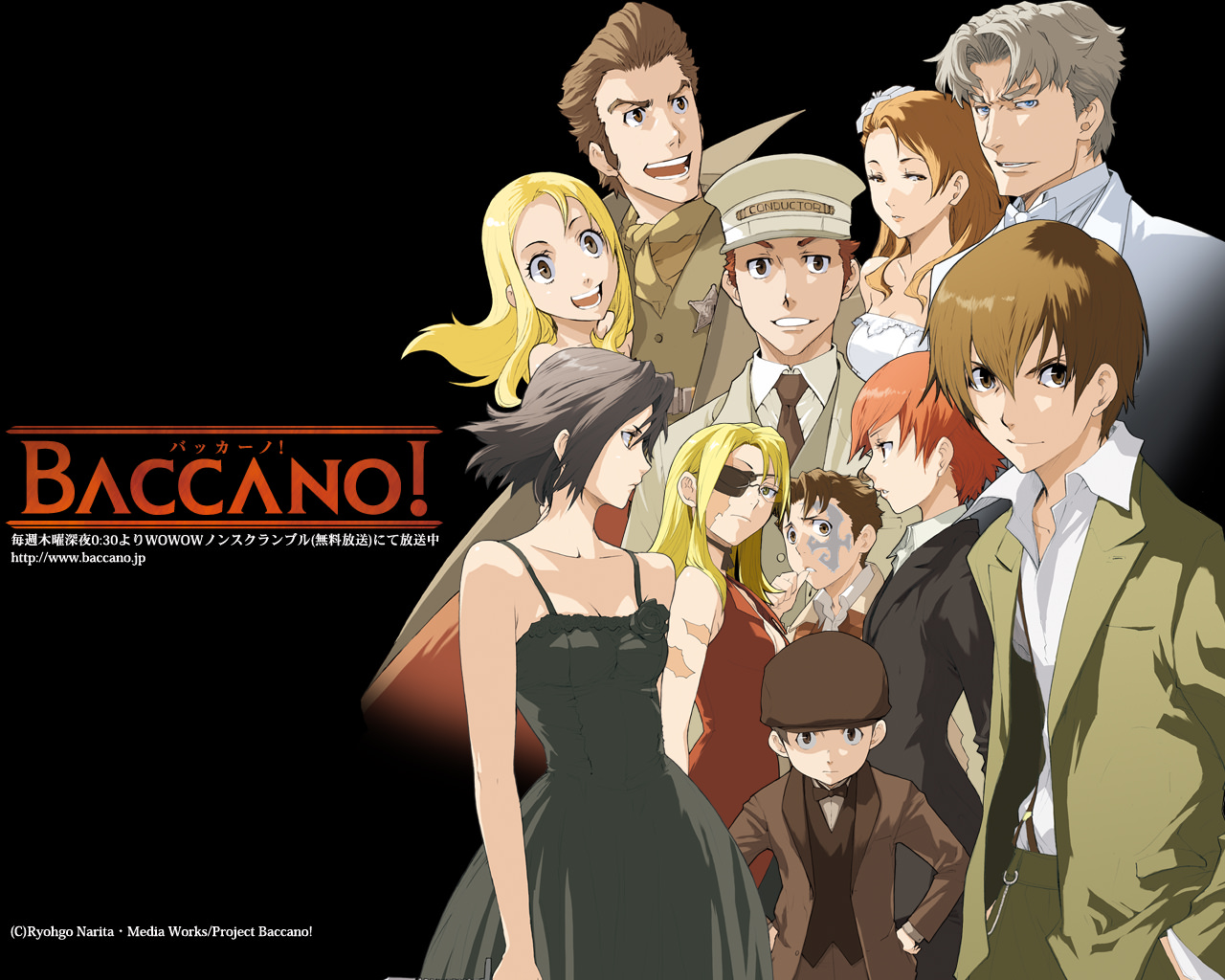 Plot: It’s the 1930s (for most of the show) and old-style gangsters are all over the place. Mostly following the story of incidents on a train that is currently being hijacked (by two separate gangs) called The Flying Pussyfoot, a much larger and more complex story is unfolding behind the scenes with one of the main focal points being the power of immortality.

…..I’m in love with this show. I really am. They nailed everything in this show. If I make it sound in any way bad from my plot synopsis, I am sorry, and do not even begin to think that way. Baccano! Is a breath of fresh air in a wave of mediocrity and crap that I’ve had to sift through in recent time.

I don’t want to spoil anything at all, so let me just give you my main highlights and my few bad points.

Isaac and Miria are awesome. I usually hate characters meant to be comic relief, but they are hilarious and I adored every second of their screen time. Their shtick never got old, they never resorted to dumb cliché jokes – they were just awesome.

In such a dark anime, you need to have talent in order to make comic relief characters truly work, and they work overtime. They also actually affect the plot….in good ways! That is just amazing! They’re the kind of characters that you’d love to meet in real life. They’re thieves, but they’re incredibly nice and funny. Hell, they’re not even really bad in a thief regard.

Jacuzzi has the best name ever. Jacuzzi Splot has the worst last name ever. He also was the breakout character for me because he was really grating on my nerves in the first handful of episodes since all he seemed to do was worry, cry and panic about everything. However, as we learned of his backstory and as the episodes go by, we learn that he’s incredibly brave and one of the sweetest guys ever. When you learn why he got his famous sword tattoo, you’re going to smile. You’re going to go ‘awwwww.’ You may even cry. This is normal. Simply cuddle the nearest cute animal, preferably one that does not have rabies, and enjoy it.

Baccano! definitely tries to do something different than most other anime. Not many anime take place in 1930s New York. Immortality’s not a new thing, but the way they handle it is pretty unique. And the relationships to all of the immortals both old and new are really interesting.

The show is crazy and insanely entertaining to watch. There’s hardly a moment where it feels slow, and, when it does, it’s for good reason such as tension or to create atmosphere. The story is great even if things get confusing sometimes, and I loved watching every step of the way.

Another aspect of this series that is fairly unique is in the fact that the story is out of order. And not Haruhi Suzumiya out of order, like in you can just watch episodes in different orders, I mean episodes jump around 1, 2, 3 or even hundreds of years without a moment’s notice. This is both a positive and a slight negative to me.

It’s pretty clever in its execution since it allows you to piece together the plot on your own and slowly gain more pieces and views of the story, which makes it more interesting and fun to watch. And it is fair to the viewer because they notify you when a date shift is taking place and what year they’re jumping to.

However, I can definitely see how it’d be annoying to some people, especially in the beginning. Once you get used to the format, it’s way easier to follow the story and piece everything together, and it is fun to watch scenes and figure out how certain events came to pass. Even so, during the first few episodes, it kinda throws you off and makes it somewhat confusing.

All of the characters were enjoyable to watch, and some were a downright blast to see in action. The only ones I might say were on the lower end of the spectrum would be Dallas and maybe Ches. Dallas just didn’t do much, and Ches was the only character who started to annoy me a bit.

The ending is left a little open-ended, but according to the dialogue, that was intentional. The ending to all of the events that happen on the Pussyfoot actually end in episode 13, which seems like it was set up to the final episodes of the series as we get no next episode preview, no ending theme song and the credits roll over the final scene.

However, there’s a three episode epilogue of sorts where the only real connecting action plotline involves a new character named Graham Specter, a crazy mechanic who uses an unreasonably huge monkey wrench as a weapon. He worked under the crazy murderous gang leader Ladd Russo – one of the hijackers of the Pussyfoot.

Some new things do get explored such as the origins of Jacuzzi’s tattoo, a continuance of the storyline between Chane and the Rail Tracer, we see how Nice got her scars and lost her eye, and a few other things.

This epilogue technically doesn’t need to be here, but it’s a good continuation. Graham’s entertaining to watch, to say the least, and, dammit, I did not want this series to end. 😦 Oh well. I guess I can read the manga next. I can also kick up Durarara! on my watch list since that’s a spiritual successor, possibly an actual successor since they take place in the same universe, and Isaac and Miria also make an appearance in it! Yay!

Art and Animation: High scores in this department. The animation is very fluid and a joy to watch while the art has it’s own distinct style without straying too much from the average anime formula. The fight scenes in particular were very well done. Even the lighting was beautiful.

Music: The OP, ED and BG music are all amazing and I would love to buy the soundtrack to this series. It fits the chaotic mood while also suiting the time period and characters perfectly.

Bottomline: I’m gushing over this. I hardly ever get to gush on my reviews. If I ever get around to making a favorite anime list, this will be at or near the top. There are some aspects that may not be perfect and the format may get confusing, but it is well worth it.

Additional Information and Notes: Baccano! Was directed by Takahiro Omori, director of Koi Kaze, Hell Girl, and Durarara! It was written Noboru Takagi, who has also written for Attack on Titan, C – The Money of Soul and Possibility Control, all of the Durarara! and Hell Girl series. It was based on a light novel written by Ryohgo Narita.

Baccano! was produced by Brain’s Base and is currently licensed by Aniplex of America.

Recommended Audience: No nudity, no sex, some swearing. The most you need to worry about is gore. It gets pretty damn bloody up in here. Because some of the characters are immortals, we see some graphic displays of violence and gore. I really shouldn’t limit it to that as some of the characters are crazy murderous psychopaths who may as well wear nothing but black and red to avoid paying outlandish dry cleaning bills for all the blood stains. It drives me nuts that Ladd Russo, one of the craziest and blood hungry sons of bitches ever, actually leads a gang where they all wear white suits. WHITE SUITS. For the gore alone, I’d say at least 15+ If you want a comparison, I’ve seen Elfen Lied and Shigurui Death Frenzy and this made me cringe.