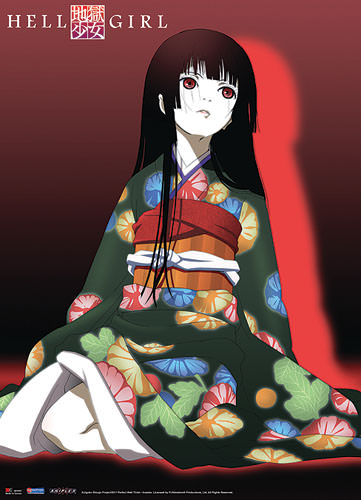 Episode 1: From Beyond the Twilight

Episode 5: The Woman in the Tall Tower

Episode 14: Beyond the Dead End

Episode 16: A Night Among Traveling Entertainers

Episode 23: The Light of the Hospital Ward

Episode 24: Home in the Twilight

Plot: A young girl named Mayumi is blackmailed by her classmate, Aya, and her two friends when they give her a loan to replace money that had been raised for the school and entrusted to her. When Aya’s abuse becomes too much, Mayumi contacts Hell Correspondence.

Breakdown: Hell Girl or Jigoku Shoujo, is an anthology series that I’ve already reviewed as a whole in the past, for season one anyway. But I don’t really like tackling series such as these without analyzing every story that comes along with it (See: Yami Shibai) So, here we are.

Hell Girl’s concept and subsequent structure for each episode is simple. Someone has been wronged or is currently being harassed or tortured by someone else, and they use the Hell Correspondence website to demand vengeance upon them.

Hell Girl/Ai gives them the trademark straw doll with a scarlet string around its neck and tells them that vengeance will be taken upon their tormentor when they pull the string. When the string is broken, their target will be instantly sent to hell and, as payment, upon the set/natural death of the contractor, they will also be ferried to hell.

The main reason you watch this series is for the characters of the day, their specific stories and that sweet, sweet release when that red string is pulled.

Because of the structure, however, the stories are slightly predictable. Hardly anyone refuses to pull the string, and plot twists and mysteries are hard to come by. Still, it’s the ride that you want and that’s what you typically get, outside of the off-color episode about Ai and her associates and their respective backstories or involvement in the story, rare as that may be.

Here’s the thing – This is a horror anthology, which almost always means wildly fluctuating quality in regards to story. There are several episodes throughout each season where you sit there actually feeling bad because you don’t believe the target deserved to get sent to hell, or you feel unsatisfied because the reasons for sending the jackass of the week to hell were unsatisfactory.

Then again, every episode usually makes you feel sad either way. Remember, the price for using the service is damning your soul to hell as well. The only difference is that you get to live out whatever remainder of life you had before you go instead of going instantly like the target does.

There are some upsides for the client. First and foremost, the tormentor is obviously gone from their life and it even seems like Ai and her associates do some sort of retroactive rewind (something that happens less frequently as the series goes along) because not only is the disappearance of the target rarely ever brought up, but most of the problems that stemmed from the target also seem to just vanish, leaving the contractor with basically a happy life. I’d dare say some clients even aim to live their lives better than they were before purely because they know of their fate. If all you have in regards to happiness is the here and now, you might as well make it the best you can.

This episode centers around young teenagers, which makes it hard to truly want the target to go to hell….but that doesn’t mean I didn’t.

The target, a bitch named Aya, is so heartless and cruel for absolutely no reason. Mayumi did nothing to her, yet she steals the class’ money without Mayumi knowing, and gives her a loan of the money, so she has her under her thumb both financially and mentally under the blackmail that she’ll tell the class if she doesn’t obey her orders.

After a slue of little potshots and overall assholery, she aims to ruin Mayumi’s life by bringing her downtown in the middle of the night, nearly getting her sexually assaulted by some creeper just to get a free dinner, then leaking a picture of her in the guy’s arms to the school, which puts her over the edge.

I do have to say, though, uh, Ai, what the hell took you so long in giving her the damn doll? You seriously had to wait until she was desperate enough to attempt suicide to say ‘Oh hey, here’s your doll.’ She usually does it immediately because, what’s the point in waiting? Yet here she waits a full day before giving it to her.

It is sad that Mayumi is marked for hell now. I find it particularly heartbreaking when the client is a child. They likely have the most life ahead of them, but it’s still hard to cope with the fact that a child is destined for hell.

It’s even worse when you consider that kids don’t really have a good grasp on making huge life-altering decisions like this, yet there seems to be no age requirement for the service. At the very least, it seems Mayumi has made peace with this fact and has decided to live a happy life as long as she has it.