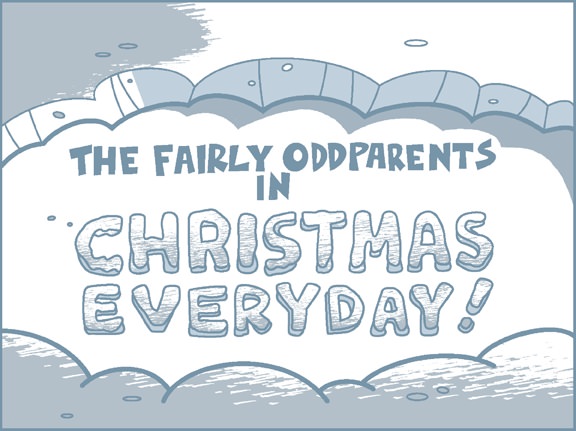 Plot: After enjoying another awesome Christmas, Timmy wishes it could be Christmas every day. His fairy godparents grant him his wish, and he enjoys toys and time with his family for weeks to come. Too much of a good thing is never a bad thing……right?

Breakdown: There aren’t many Christmas specials that I would say are better enjoyed after Christmas is already over, but if there’s one that makes that list, it’s this episode.

So many Christmas specials leave you wishing that Christmas came every day, but it’s really not a great idea. Eventually, you will get sick of it because one of the reasons amazing things like Christmas are so special is because they only come once a year. If you had it all year round, you wouldn’t appreciate it anymore.

I mentioned this episode in the Stuck on Christmas segment in my Mickey’s Once Upon a Christmas review. In that segment, the only ones aware that Christmas was repeating itself were Huey, Dewey and Louie. Donald, Daisy, Gertie and Scrooge were none the wiser, making it have a Groundhog’s Day effect. In that version, it would be damn near hell because you’d be hearing the exact same words and experiencing the exact same events over and over and over.

I also find Timmy’s reasons for wishing such a thing to be better than Huey, Dewey and Louie’s. While Timmy obviously wants to bathe in gifts day after day, the main reason he wants it to be Christmas every day is because his parents stay at home with him instead of being away at work. For the three ducks, all they want are gifts and Christmas dinner.

But away from the comparisons, we still have a very original and interesting interpretation of what would happen when wishing such a thing in this universe. After a while, everyone starts to get sick of the carols, dinners and basically everything Christmassy. They get so sick of Christmas every day that when they spot Santa in the sky, they try to shoot down his sleigh.

Businesses and schools remain closed, meaning people can’t buy anything or get anything done. (Plus, I assume, people would eventually lose their jobs and society would collapse…)

Not even the kids make off well for long since everyone starts getting fewer and fewer gifts each day.

After a while, Timmy finally realizes that Christmas every day wasn’t a good idea after all and that everyone’s had enough, so he wishes for Christmas to be over. However, as we’ve learned is common whenever Timmy makes a bad wish, Cosmo and Wanda can’t reverse it. This time, they simply don’t have the magic for such a thing.

Every year on Christmas, the fairies all lend their magic to Santa so he can be the one to grant the various wishes of the children on Christmas. They get their magic back the day after Christmas, which creates the obvious problem. They can still do minor things like disguise themselves and poof places, but they’re ultimately powerless to make such a big wish.

However, I don’t quite get this. Timmy made this wish on Christmas night – meaning Cosmo and Wanda shouldn’t have had the magic to make the wish come true in the first place.

Another interesting repercussion of Christmas happening every day is that the other holidays can’t occur – meaning the representatives of those holidays are extremely angry. Not only do they already feel inferior to Christmas and Santa, but now Christmas has stolen whatever enjoyment they got from people celebrating their holidays.

They want to take Santa down by transferring his powers to them with the unwilling help of Cosmo and Wanda. After they do so, they plan on sending Santa to the imaginary date of February 33rd.

Meanwhile, Timmy snowmobiles to the north pole with the help of every Christmas-celebrating kid with internet access across the globe. When he arrives, the kids all follow to help save Santa.

Santa is extremely overworked and running out of presents to give the kids since he can’t make enough toys every single day to meet demand. Even with magic, he won’t be able to do anything if this continues.

The main confrontation is really my only major negative point about this episode. The other holidays very nearly succeed in taking over and banishing Santa, but Timmy tries to talk some reason into them. When the army of every web-enabled Christmas-celebrating kid in the world comes, the other holidays can’t find it in them to fight off kids since their main intentions in the first place was to bring their own brand of holiday joy to the kids of the world and be loved.

Timmy says they are loved, just not as much as Santa. He brings them toys, and Christmas brings their families together. The holidays realize he’s right. They all then lament that their holidays are all kinda lame like Easter with eggs that go bad if you don’t find them, April Fools Day with making kids play mean pranks on each other, and Cupid saying Valentines Day makes kids fall in love, which he only realizes is a bad thing when the kids all express disgust.

Understanding that Christmas is just a better holiday and that Santa will always be loved more than them, they decide to let Santa go and reverse everything.

I know the important thing is that they know they’re loved either way, but the fact remains that this started with the other holidays being upset that they were being massively eclipsed by Christmas and Santa. Resolving this plotline by saying ‘Well, yeah, that’s because he’s better than you guys.’ ‘Oh, yeah, you’re right. Guess we better fix everything.’ END. Just seems nonsensical and lazy.

A better option would’ve been to explain the reasons why those holidays are special to the kids too in their own ways. Like Easter is fun for egg hunts and candy, April Fools Day is great to make up creative pranks for everyone to get a laugh, and Valentines day, as much as it makes some kids gag, gives them a bit of courage and hope to make a special connection with someone they like. Maybe say that Christmas may get the most attention, but all holidays have a special place in the hearts of children.

Everything gets changed back to normal, a new rule is made in Da Rules to never allow another kid to wish it were Christmas every day, and, to make it up to Santa, the holidays and Timmy take over delivering presents for next year’s Christmas.

All in all, I still love this Christmas special, even if the climax is a bit poorly written in my opinion. It’s a great way to ease out of Christmas highs as well. I’m sure many people have that same wish when December 26th rolls around, and this is a pretty good way to remind us that special rare events such as Christmas lose their magic and wonder if we live it every single day.

The song in this special is also one of the best Christmas special songs to debut in recent years. ‘I Wish Every Day Could Be Christmas’ is catchy, Christmassy, funny and sweet. I listen to it on a fairly regular basis, and I sing it in the off-season.