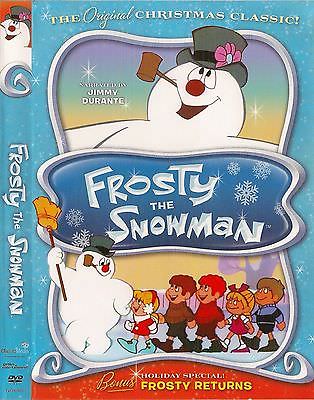 Plot: Frosty the snowman was a jolly happy soul. With a corncob pipe and a button nose and two eyes made out of coal. Frosty—Again, there’s no way you haven’t heard this song. You get it.

Breakdown: Surprisingly, this is one Rankin/Bass special I don’t watch very often. I guess because the story never interested me as much as some of the other Christmas specials. It’s even more cut and dry than Rudolph’s. He’s a snowman who came to life, started melting and then he had to go somewhere colder to stay alive. The song’s kinda long but most of it is padding. Not to mention, I don’t know what it is about him, but I never got too invested in the endearment of Frosty as a character. He’s nice, sure, but I find him a little annoying. Especially when he yells out ‘Happy birthday!’ when he’s brought to life. It wasn’t funny the first time, it’s not funny the second or third times.

Even the voice acting is a bit of an off-key aspect to me. Jimmy Durante as the narrator and Jackie Vernon as Frosty just never sat well with me…..Boy, I’m complaining a lot more than I thought I would.

They extend the story for a film version, like Rudolph, but they couldn’t even get half the time (25 minutes) without it really seeming like it’s dragged on.

Not to mention they added an antagonist in Professor Hinkle who really isn’t wrong in his pursuit. He’s wrong to nearly kill a kid by letting her freeze to death unless she handed him a damn hat, but they act like they’re entitled to steal his hat because it made Frosty come to life. Even the narrator agrees that the hat is rightfully theirs.

A quick rundown of the story – Professor Hinkle is a failed magician who is putting on a show for the kids in school for the Christmas party. He sucks, and the kids go out to make a snowman during recess.

They have the snowcrafting skills of gods because they somehow mold an anthropomorphic snow person instead of a traditional snowman. He can even stand on two feet with that big belly. Hinkle’s hat accidentally lands on Frosty’s head by his rabbit, Hocus Pocus. He’s brought to life for a brief moment before Hinkle takes his hat back. The kids are indignant, but can’t do anything about it because they’re kids. Hocus Pocus returns the hat to Frosty, though, and they have a fun day together.

Frosty starts to melt, and they decide to take him by train to the north pole, which defies all laws of everything. One of the kids, Karen, decides to join him. They hop a train since they can’t pay for the $3000 impossible magic train ticket. Frosty stays cool in a refrigerated car, but it makes Karen slowly freeze. Hinkle hitches a ride underneath the train to pursue them.

At a stop, Frosty hops out and tries to save Karen, but instead of going to the town they’re clearly close to and finding her shelter and warmth, they go into the snowy tundra of the woods and wander aimlessly while Frosty, the man made of snow, carries her. Frosty, your heart’s in the right place, but she’s going to lose her toes. Put her down.

Hinkle tries to get off too, but ends up crashing down a mountainside and gets snow plopped on him. And if the sound effects are any indication, the snow was made of pans.

Frosty, the anthropomorphic snowman, does not possess the ability to make a fire, so he enlists the help of woodland creatures to do it. I get that he can’t be near fire but surely he can make one then back away once it’s going. Snow doesn’t melt that fast.

Frosty and Hocus decide to enlist Santa’s help in getting Karen home and him to the north pole. However, Hinkle shows back up, blows out Karen’s fire and attempts to get the hat back again. Frosty and Karen manage to get away and conveniently end up in front of a greenhouse. Frosty, instead of just letting Karen down and allowing her to walk in the greenhouse by herself, carries her in quite a ways, allowing Hinkle to easily trap them inside when he catches up.

Santa flies overhead and stops because….I actually don’t know why. He and Hocus find Frosty as a puddle in the greenhouse with Karen sobbing over him. Santa cheers her up by saying Frosty was made out of Christmas snow, and that kind of snow never goes away, even when it’s melted. He demonstrates how special the snow is by opening the greenhouse door and allowing the chilly air inside, instantly transporting the puddle outside and molding Frosty back to the way he was, button nose, broom and corncob pipe and all. Karen’s about to free us of the cold demonic stare of Frosty’s dead black eyes until Hinkle pops back up to get his hat back.

Santa stops him by saying if he tries to take the hat back, he’ll never give him another Christmas gift. I don’t know why he’d be getting them anyway. He’s clearly a naughty person. He even describes himself as an evil magician. Santa tells him to go home and write “I am very sorry for what I did to Frosty” a hundred zillion times in order to get his gift. If Hinkle asked for Carpal Tunnel and hospitalization for exhaustion in trying to complete this impossible goal, he’ll certainly have a merry Christmas.

Hinkle agrees, Frosty’s brought back to life, and Santa returns Karen to her house….leaving her on the roof….with no method of getting down….good job, Santa. Also, her parents probably aren’t home since they likely formed a search team to find their lost daughter. He leaves for the north pole with Frosty, bringing him back every year in the future so he could reunite with his friends.

Despite my nitpicks and complaints, I do see the appeal of this special, and I can get how this would be adopted as an annual Christmas tradition. I’ll watch it every few years or so, but it just never caught onto me as a must-see Christmas special. It also neglected to address something that I always wondered about – where did they get this hat? I know it’s Hinkle’s, but where did he get a legit magic hat?