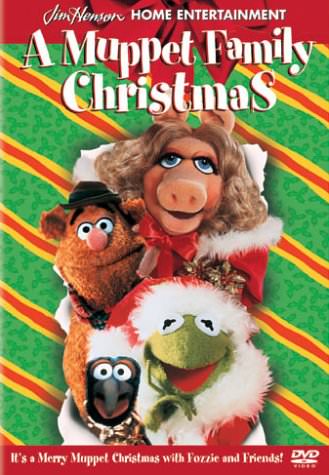 Still don’t care! It’s time for A Very Animated Holiday Special, where we watch and review as many holiday specials as we can get our hands on over the month of December! And I have a bit of a request for you all. If there’s an animated holiday special or movie you’d like me to review, feel free to ask and I will do my best to gift wrap it for you. I am particularly interested in any winter holiday specials that aren’t Christmas, because I’m kinda hard up for some variety. Hanukkah, Kwanzaa, New Years, etc. Throw ‘em at me.

And now to today’s presentation – A Muppet Family Christmas! Made in 1987, this is a very simple special where the Muppets all spend Christmas at Fozzie’s mother’s house. She was going to go on a tropical vacation for Christmas, and she was about to rent out her place for the holidays to some guy named Doc who wanted to spend Christmas alone with his dog, Sprocket.

Contrary to what you may think, it’s really not a plot point that these three have their holidays barged in on by the Muppets. Doc is a bit perturbed at first, as is Fozzie’s mother, but they quickly just accept it and enjoy a happy holiday together.

Besides that, Miss Piggy is stuck in the city, trying to get to the house through a blizzard, which is something I’m completely uninterested in because I don’t like Miss Piggy.

And we have the ongoing trials and tribulations of the Swedish Chef doing everything in his power to murder a bird for dinner (he even targeted Big Bird. D:)

The other 35 minutes of this 47 minute long movie are mostly made up of the Muppets singing practically every Christmas song known to man throughout the movie.

The movie is a bit bogged down by a load of Christmas carols, but it’s still pretty entertaining in its own right. There are several heartwarming and funny moments that put you in the Christmas mood. Even if I am confused as to why Doc seems so weirded out by the Muppets at first when Sprocket is a Muppet….Also, I’d like a tad more Gonzo and Rizzo, but that’s just my bias.

The entirety of the Muppet gang is here for the holidays, not just Kermit and the gang. We also get joined by the Sesame Street crew and even the Fraggles. Including them all truly makes this feel like a big family Christmas gathering. I especially liked a joke where Doc was talking with Bert and Ernie and they kept saying the words he was saying started with specific letters. When he asked them what they were doing, they said that counted as small talk where they were from. I just thought that was a hilarious bit of pseudo-meta humor.

Jim Hensen makes a cameo at the very end if you want to finish off this lighthearted Christmas story with a bittersweet reminder that he is no longer with us. Thanks for giving us a little Christmas magic, Jim.