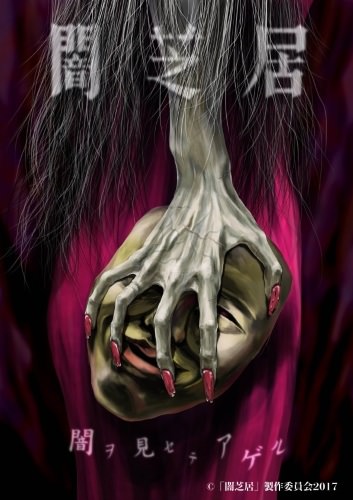 Breakdown: The initial hate I had come to expect from the fanbase seemingly died a little when this season got its footing. A few episodes out the door and, while there were still those familiar naysayers who believe basically all series start sucking once they exit season one, the comments were mixed at first for season five and then they got gradually better. Yami Shibai finally seemed to have shrugged off the blah-ness that haunts them throughout each season, only finding a ray of redemption in a finale twist or a particularly good episode.

I’m pleased to say that, despite some hiccups, this held true through the end. I’d even hazard to say this season was even better than Yami Shibai 1.

Episode 1: Wrong Number Starting off strong, this story takes a familiar set up with the mysterious creepy phone call and adds a twist that makes the ending very satisfying. A rare example of a horror story with an unlikable lead that really works.

Episode 2: Give it to Me Another good entry, this one mostly just suffers because, really, if a kid is being that greedy and annoying, you don’t just keep giving them stuff…..That doesn’t have much to do with the story, but if she never gave the kid anything, she might still be alive. Teach kids good manners = not dying.

Episode 3: The Crow Children This one was not really scary at all, but this is an interesting and enjoyable story with some pretty nice visuals.

Episode 4: Copycat This story was very cleverly written. While it is predictable to a point, the absolute ending throws you for a loop. This story is also creepy on the basis of being a very realistic scenario and not relying on supernatural circumstances to get a scare across.

Episode 5: Shadows of Women Clever, but not creepy or scary. Love the artwork.

Episode 6: Giveback-Sama Predictable and not all that scary, plus the structure of the myth is confusing, but there was one jaw-dropping twist I’ll give it credit for.

Episode 7: Hide and Seek WHAT THE HELL WAS THAT THING!? AAHHHHHHHH POINTS OFF FOR SADNESS IN THE ENDING, WHICH IS PETTY, BUT BLEH, AAHHHHHHHH!

Episode 8: The Neighbors Not that creepy, but put a nice spin on a tired setup and did legitimately surprise me. Love the artwork.

Episode 9: If You Want to See Ghosts Weakest entry of the lot. Interesting setup, but doesn’t go anywhere you don’t expect it to go. Plus the more anime-ish artwork makes for less scares.

Episode 10: Flower Reading This story is touching and beautifully written enough to earn a perfect gold star with no scares. The artwork here is also fantastic. It’s not scary at all, but, as I mentioned in previous seasons, they technically don’t have to be scary to be good.

Episode 11: I’m the Only One Points off for cathartic horror ending instead of scary. Points given for friggin’ scissors. Dammit. Eugh. Also, the twist was clever.

Episode 12: The Last Bus Creepy, but not that much. Mostly gets points off for being so confusing on why this is happening to this woman.

Episode 13: Seductress Intentionally scratchy artwork….film noir….Mmm….AH! What the hell is happening!?….Oh….Pbbbbtttt ahahahahahah! Also, the series ender was very confusing. I like that they actually attempted to do something this time around *coughYamiShibai4cough* but what is it trying to say? What happened? Who is that guy?

Additional Information and Notes: Yami Shibai 5 was produced by ILCA and is currently licensed in the US by Sentai Filmworks.

Recommended Audience: No worse than usual. 10+