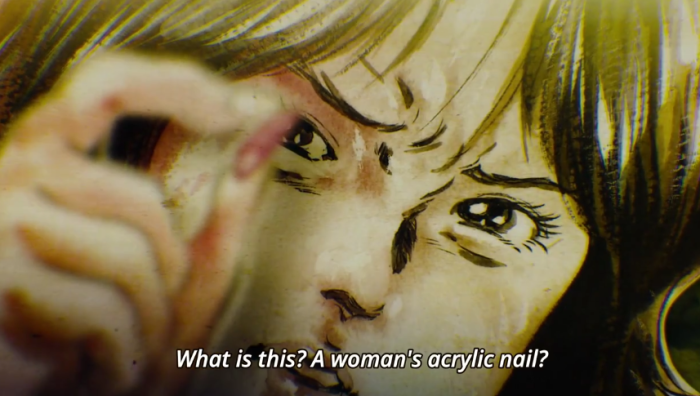 Plot: A woman gets jealous when she finds evidence that her husband is cheating on her. She wants answers….and she’ll get them….Though she may regret it.

Breakdown: This one wasn’t particularly scary or even creepy, but it was very clever. I didn’t get the twist until the absolute ending, and they definitely took the story in a direction that I never would’ve expected.

The art this time was changed a bit, and while it didn’t add to the creepiness all that much, it was a really cool addition. The art style is basically the same, but it’s done with what seems like watercolor crayons. Also, for some reason, the ‘paper dolls’ for lack of a better word, seem like they cast more of a noticeable shadow in this episode.

Someone in the comments also pointed out something interesting that I should’ve noticed earlier. This season seems to be putting total focus on female victims. The ‘kids’ at the start are actually all women and girls. Every episode so far has had a female main lead. And the ending theme silhouettes are all of women. I don’t know why this season is going down this path or what it’s trying to do, if anything at all, but it’s interesting either way.

Plot: A high school girl is distraught after losing her boyfriend to a girl she thought was her friend. She comes across an odd story in a library book about a being named Giveback-sama. You call her as the clock nearly strikes midnight and merely ask for whatever you want back and she will deliver it to you. However, there’s a catch. You must call her back the next day at the exact same time to thank her for what she’s done or something terrible will happen.

Breakdown: This one’s fairly predictable due to the story actually saying straight out that ‘something terrible will happen’ if she doesn’t call her back, so obviously she’ll either forget or something will prevent her from calling. However, there is a twist that was a little clever and I did drop my jaw near the middle.

Again, a commenter made a theory as to what the twist was about, and while it does make a good deal of sense, there’s one aspect that doesn’t make any sense to me.

They said that it seems like the friend might’ve used Giveback-Sama before the girl, and forgetting to call her back caused her untimely death. When the girl went to make the thank you call, the friend came back as a spirit to prevent her from doing so in order to get her killed as well, I suppose as revenge for getting Tomo (The boyfriend). A sort of ‘if I can’t have him, no one can’ situation. However, the entity is called GiveBACK-Sama, so I’d think she’d have to have him before the girl to ask Giveback-sama to give Tomo back. *shrug*

Without this theory, you just have to believe that the friend died because of the girl’s request and she came back as a spirit to stop her from making the thank you call as revenge, which, admittedly, does make a little more sense. What do you think?