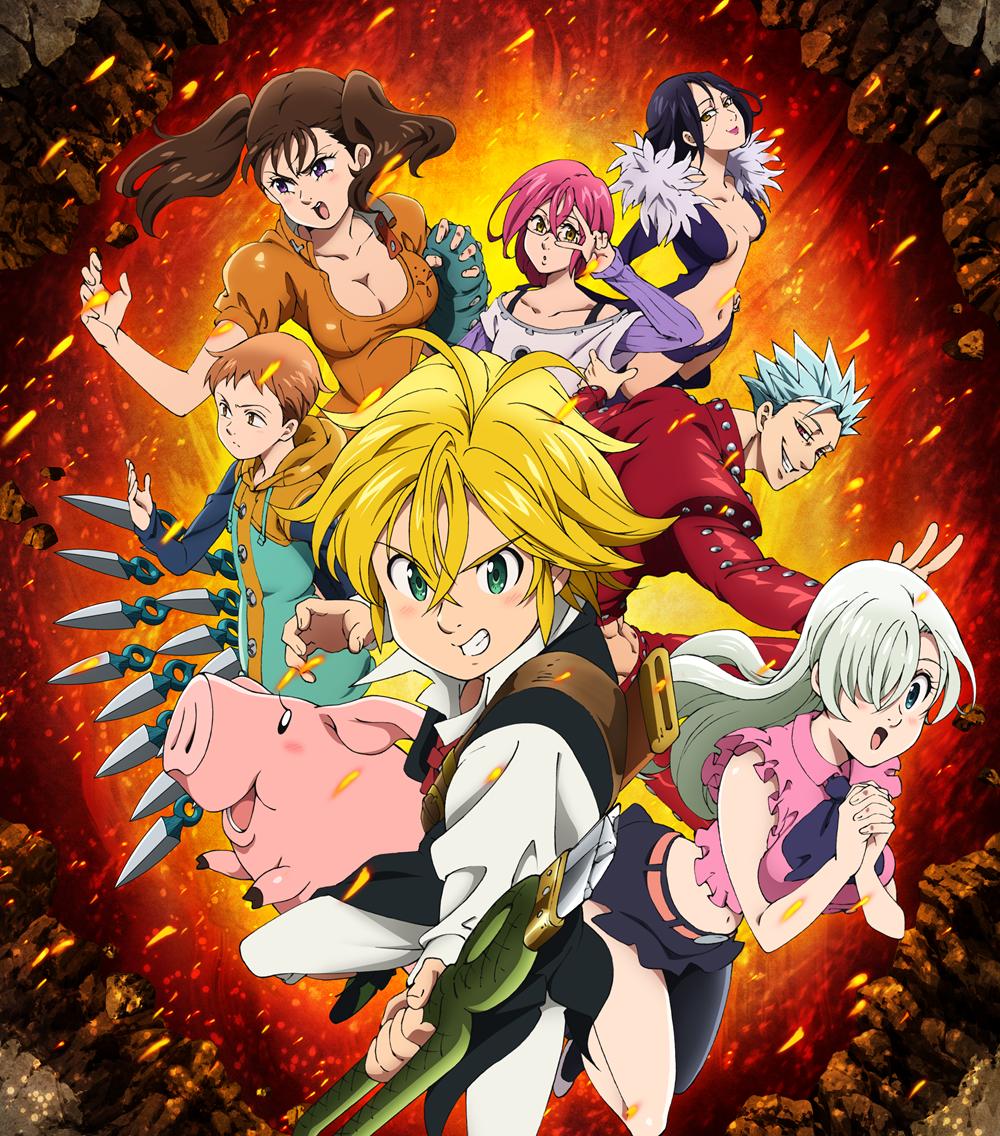 Plot: Ten years ago, a slue of extremely powerful Holy Knights, guards to the King himself, were slaughtered in an instant by a band of criminals called The Seven Deadly Sins. It was rumored that, after this incident, the seven of them were quickly killed. But word has it that they’re all still alive and well, wandering the countryside.

A young boy and his pig own a mysterious bar where a girl collapses while wearing a suit of rusty armor. He helps her recover, but a group of knights show up at the bar’s door demanding to know where the person in rusty armor is in order to interrogate them on information regarding The Seven Deadly Sins.

The boy helps the girl escape, but they’re soon cornered by the leader of the knights, a massive and ruthless man named Twigo. He identifies the girl not as a member of The Seven Deadly Sins, but as Princess Elizabeth. He has his orders to bring her back alive, but doesn’t care and attempts to kill her anyway, planning to explain it away by saying she died as an incident of battle.

In an effort to save her, the boy faces off against Twigo with a broken sword, but manages to handle him with ease. Twigo finally recognizes the boy as the legendary leader of the Seven Deadly Sins, Meliodas. He defeats Twigo with ease and he and Elizabeth set off on a quest to find the other Deadly Sins in an effort to band them together to help defeat the Holy Knights, who have secretly overthrown the king and plan to create a massive war.

Breakdown:  This one was suggested to me a while ago on Twitter by @hotchocolate29, also known as Meliodas Aino. Now that I know the main character of this anime’s name, I’m going to go ahead and assume they’re a fan. I always like seeking out requests and suggestions, so here I am. Sorry it took so long, though. 😦 While I usually take a while to complete whole series, I figured after all of this wait time I at least owed an Episode One-Derland to them.

So how did this fare in my eyes? Good…..but plenty of room for improvement. As a first episode, the show does a pretty good job at establishing the world, the main plot, the backstory and our main characters. They actually do a little too good of a job on the backstory part because I feel like they repeated the story of The Seven Deadly Sins a bit too much.

Despite the fact that these guys are called The Seven Deadly Sins, I see nothing relating to the actual seven deadly sins. They’re not named as such individually and I haven’t heard nor seen any powers relating to it. It’s possible that it’s just a title, but that’s a missed opportunity if it is.

Still, with a strong cast of characters and good enough writing, even a seemingly stale plot can be a gem. And I believe they do have a pretty strong crew here.

Meliodas is pretty likable. He’s very laid back and not overly dramatic about his desire to help and save people like a lot of shounen anime protagonists. Still, I feel like he might end up as an annoying main character over time simply because he seems a bit overpowered. He blew away the bad guy of this episode without even batting an eyelash and he never seem concerned in the least. Either he has to be badass enough to let this slide or he has to face some challenge very soon. Staying like this will just drain all of the tension out of the show.

Elizabeth….is….nice….Maybe too nice. Who wakes up to someone shamelessly squeezing their boob over and over and doesn’t even react? Meliodas does it again later and she still doesn’t react. Plus, like a typical princess, she seems very much inclined to the damsel in distress trope. That trope is even more painful when you have legit knights and she’s a real princess.

Then we have Hawk, Meliodas’ talking pig sidekick……Hawk is awesome. It’s very difficult for me to enjoy talking animal sidekicks since they always seem more annoying than they are endearing, but Hawk’s just great. Practically every line that comes out of his mouth is funny, and he has great chemistry with Meliodas right off the bat. He also serves as a great foil for Meliodas on several occasions.

In the art department…..Okay, call me a hipster, call me old, call me a nitpicker….I just don’t like the newer styles of anime. This show has a look about it that a lot of new anime seem to have. The characters more or less have ‘baby fat face’ syndrome where there’s a lot of overly rounded edges in the face, the details seem sparse, the lines appear too thick and even the colors seem too saturated for my tastes.

I will say that all of these things, except the baby fat face thing, are probably to make more fluid animation more easily. This is actually kinda odd because shows like these tend to have moments where the animation is ridiculously cheap then they have moments that are so fluid that I feel like they’re rotoscoped. The art’s not particularly bad, and the animation can be very great sometimes, I just want to be honest in saying that the art style is really not my taste.

Music-wise, nothing really hooked with me so far but it’s very fitting for the story, tone and theme.

It may have been a slightly disappointing first venture, but I believe this episode showed that there is enough here to keep you entertained even through the tropes and cliches. I hope this series only gets better as we move on.