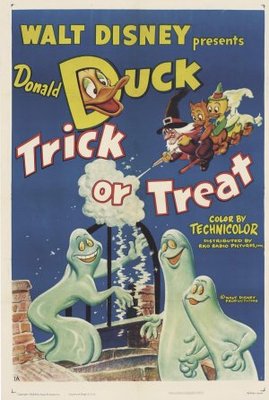 Plot: Donald plays a mean trick on his nephews as they trick or treat at his house. Feeling sympathetic towards the poor ducks, a witch befriends them and helps them get revenge.

….Ahem. We start off this year’s AH with a Donald Duck short. On Halloween, Donald’s being the little jerk he is and decides to play a prank on his nephews, Huey, Dewey and Louie, as they arrive at his house to trick or treat. This would be mostly fine since it’s TRICK or treat, but when the ‘prank’ involves blowing up their sacks of candy with explosives….yeah, to quote the wrong franchise, it’s duck season!

Sweet vengeance does take place, and it’s pretty darn funny. It’s also a bit scary when you think about it. Having only your feet be possessed sounds like something that would happen in Army of Darkness.

Also, why does Donald even have a bowl of candy prepared if he’s just pranking everyone who comes to his door?

Overall, this is a pretty great Disney short to play on Halloween, and for this looking for some Halloween music, you have a massive ear worm here.

Recommended Audience: Well, Donald nearly blows his nephews’ hands off with explosives. Other than that, nothing.