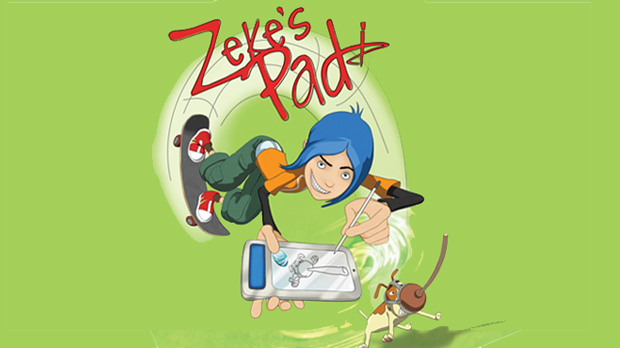 Plot: Zeke Palmer has a magic electric drawing pad that allows him to alter reality and create things from thin air just by drawing them.

Breakdown: It’s like Chalkzone mixed with Fairly Odd Parents only not nearly as imaginative, funny, or with as much freedom.

I know, I’ve done similar bits before, but it’s true. This concept, on paper (….puns?), is a very good one that hasn’t been done to death but has been done, ala Chalkzone. But its execution here is just plain not good.

First and foremost, this is not an origin story episode. Which is….alright, because we can get the gist of the main plot from the theme song and the episode itself. Zeke has some sort of tablet (called ‘the pad’. How creative) that can create anything he draws. It seems like this ‘power’ is a secret, but I don’t really know. His best friend knows, and that’s all I got.

The origins of the pad are rushed through in the theme song and still make no sense. An electronic drawing pad was being assembled at a factory when the machine suddenly malfunctioned and caused lots of sparks and….magic? The machine threw it out, seeing it as defective, but it bounced out of the bin and out the window where Zeke caught it, somehow instantly knew its powers and how to use it and used to it get away from a dog that was chasing them…..Okie.

Next, Zeke is bland and forgettable with his only notable traits being that he’s lazy, selfish and inconsiderate. Because that’s what I want in my main character – unlikable traits.

To give you the low down, let’s go through Zeke’s actions throughout the course of the episode.

We spend well over two minutes hearing him bitch and moan and have a breakdown over having porridge for breakfast yet again. Apparently his insanely neurotic mother makes it every single day. However, this ‘joke’ has no real setup because we don’t go in knowing this and the joke runs for way too long and amounts to nothing.

After he has a minor porridge breakdown, he bitches and moans that they never have something good like pancakes for breakfast. Aw, poor baby. Your loving mother takes the time out to make you breakfast every morning and it’s not what you want. If you want pancakes, get off your ass and make them.

And he takes my advice…..by going to his room and drawing a huge pile of pancakes on the pad, which materialize before him. And by ‘huge pile’ I mean he stockpiles his room nearly to the ceiling with pancakes and he chows them all down….without syrup or butter. I know that would be messy, but without syrup or butter, you might as well be eating mattress foam.

He gets a huge gut because of this, and, continuity honored, his gut stays this way for the entirety of the episode. However, he completely fails a fitness test at school because of it. Why the hell would you draw a room full of pancakes to eat when you have a fitness test that day? Huge gut and cartoonish appetite aside, eating even a regular helping of pancakes before strenuous exercise would make me feel like garbage.

He got the worst grades on the test in school history, so he’s sent to a fitness camp to bulk up and pass. He exercises a little and gets so fed up with the whole thing that he draws a hot air balloon to escape, but drew it with a nearly empty fuel gauge and crashes…..Yeah, don’t ask me why he did that. He brings it up (“I had to draw it with a FULL fuel gauge?!”) but it still makes no sense (Why would you draw it with an empty gauge to begin with?….or a fuel gauge at all?). Anyway, he makes it home and obviously gets found out because his crazy camp counselor instantly finds he’s escaped, goes straight to his house, searches it and finds Zeke.

That was a pointless waste of time because of stupid, by the way. Of course they’d find out and call his parents. Of course they’d look for him. Of course the first place they’d look is his house. Maybe they wouldn’t practically break in and search without asking permission, but they wouldn’t just leave him be. And he knows this camp is necessary to get him a passing grade, so he should know escaping is pointless. If he were smart, he’d draw a way to make the camp or test easy as hell to pass. Hell, he has reality altering powers, just draw a test with an A grade on it.

Also, just to get this plot hole/annoyance out of the way, Zeke’s father, despite hearing that Zeke has to fitness camp to pass his test, for some reason thinks it’s ridiculous that Zeke would be a camper at a fitness camp and that him, being an artist, must be at an art camp. Even after telling him that and being found at the house, escaping from the fitness camp, Zeke exclaims later that his dad still thinks he’s at art camp…..Is his dad an idiot or is this very poorly written? I can’t tell.

Zeke recruits his best friend, Jay, in the middle of the night to help him pass his test. He claims he can’t just draw himself before he ate all those pancakes,because going back, deleting and erasing  always goes horribly wrong. We just have to take his word for it, but uh…..just draw yourself in a fit way you’ve never been. That way it’s an alteration not a redo or a deletion. It’s not that hard.

Just a note, Jay does not help him at all. Not for lack of trying or because Jay’s a bad friend, but because he has no way of helping him. Zeke has the pad and Jay could easily give him advice over the phone, but he begs him to put aside his studying for an algebra exam to help him at the camp and he, reluctantly, goes. When Zeke’s pad gets taken away by the counselor, they both sneak into his office to get it, but it’s entirely unnecessary for Jay to be there. He doesn’t do anything because there’s nothing for him to do. He does point out that Zeke is running away faster than he is and asks if he’s been working out, but bite me Zeke’s Pad. There’s no way a day and half of moderate exercise with a huge gut hanging over his pants made him fit enough for there to be any noticeable improvement.

When he gets his pad back, he thinks of the perfect solution. He draws them at Art Camp, which alters reality….somehow, to making everything an art test and art challenges, which Zeke excels at.

The only repercussions of Zeke’s selfish and lazy actions is that Ike, his older jock brother who both gave him the initial fitness test and worked as a counselor at the fitness camp, is still rough on him, they have to draw Ike in his boxers (Jay’s still at the camp because of no reason whatsoever.) and Zeke’s mom makes him pancakes when he gets home as a gift for passing his test, which, wahmp wahmp, makes Zeke freak out….Also, he’s instantly thin again when he changes the camp to an art camp…..continuity makes sense, right!?

Nothing about this episode was funny. Not a damn thing made me even want to put effort into moving my lip muscles. I’m watching a lazy inconsiderate idiot get himself into trouble, easily get out of it and get what he wants all the while bothering his friends and scarily manipulating reality and those around him. Not to mention a total lack of a lesson being learned or comeuppance for his behavior. He could at least have done something nice for someone else with that pad (like, maybe something to help Jay with his algebra test), but he just uses it stupidly for stuff he wants and is too lazy to do himself.

The jokes they attempt have no thought put into them. Most of them are unfunny slapstick gags, burp jokes and a fart joke, the rest is just cartoon zaniness in how quickly and sporadically they move, which may as well be slapstick.

As an artist who would value this power like a gift from the gods, it bugs the hell out of me that this is such wasted potential. I would love another Chalkzone-esque show. It allows for such amazing creative freedom in plots, characters and powers. However, it is just not used well here. There are vague and undefined restrictions by default and they can’t use the power many times because the thing needs to be charged.

Not to mention the fact that there’s no artistic merit going into these drawings. We never see him actually ‘draw’ anything. We get some weird overdone transition, see the finished drawing for about a second and then cut to the thing appearing or reality changed. We don’t even see him draw anything for the hell of it or at all despite the fact that people keep saying he’s creative and loves to draw.

Even in the very end where he gets his altered test to draw Ike, we don’t get to see him draw or see his finished drawing. This is a show based around art-fueled powers….with no art.

Speaking of art, the CGI cel-shaded art for the show is really blah with no real style to it. The colors are bright and appealing, but that’s about it. These graphics look pretty dated for a show that was supposedly made in 2010, and the animation, while not having many errors, doesn’t have a good fluidity about it. Half the time it’s jarring shifts and the other it’s slow moving in a sliding fashion.

The music’s alright, but forgettable. I listened to the theme song three times just five minutes ago and I’ve already forgotten it.

Two-dimensional characters with the MC having no real good traits conveyed so far, poorly written story structure and dialogue, no good jokes and a complete waste of a fairly good plot and you leave me with no reason to want to continue.

Also, in spite of the fact that this show won two Elan awards for Best Animation TV Production and Art Direction, this show only lasted one season. Hm.