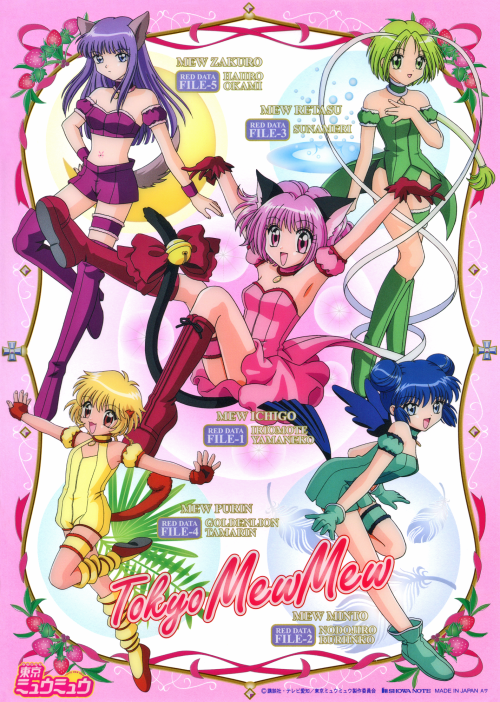 Looking for Episodes 1-26? Check out the Sub Dub Comparison for the series here.

Episode 28: Kitty Panic! The Key to the Mystery is Her Kiss!

Episode 29: A Forbidden Love? I Can Understand Cats ~ Nya!

Episode 30: Be Honest! Unspoken Love in the Crystal Ball

Episode 32: Princess Fight – The Hero Can’t be Bought for Money

Episode 34: The Most Important Matter – The Ability to Trust Someone

Episode 36: Shirogane’s Past – The Secret of the Mew Mew’s Birth

Episode 37: Shining Tear – Celebrating Christmas with Just the Two of Us

Episode 38: Miracle of the Holy Night – No Secrets Anymore

Episode 39: Sweet Trap of the Lavender

Episode 44: The City Turns into a Forest – What Protects Ichigo’s Smile

Episode 45: The Riddle Dissolves! The Truth About the Blue Knight

Episode 47: The Power of Love – I Will Protect Aoyama-Kun!

Episode 48: The Labyrinth of the Alternate Dimension! Kisshu’s Gamble!!

Episode 49: The Awakening of Blue: Another Appearance!

Episode 51: Final Battle! I Believe in Your Smile

Plot: After saving the city from Kisshu’s latest plot, Ichigo rushes to the bus station, desperate to see if Aoyama is still there. After searching for him in the rain, Ichigo collapses and cries believing that Aoyama left and hates her now since she blew off their date and never even returned his calls.

Aoyama comes out of the shadows revealing that he’s been there the whole time. Despite being elated to see him, Ichigo can’t bring herself to make up a good excuse as to why she was so late. As they quietly stare at each other, Ichigo thinks to herself that she might not have any right to loving Aoyama since she’s always lying to him. As she tries to say something to Aoyama, he suddenly embraces her and confesses that he loves her.

Jolted by his confession, Ichigo embraces him back. Aoyama breaks the hug for a bit to gently fix her hair, but she quickly bolts away from him after realizing that her cat ears had started to emerge after getting excited from Aoyama’s words and embrace.

Aoyama, believing he’s offended Ichigo or that she doesn’t feel the same way, gives her a handkerchief and starts to leave. She stops him and does her best to hide her ears with the handkerchief and her now emerging tail with her hand. She draws up the courage to also confess her love to him, and they embrace once more.

The next day, Ichigo floats through everything in a daze of love and happiness while everyone wonders what happened to her. Deep Blue, having been struck with some of Ichigo’s attack in the last episode, continues to cry out in pain. Deep Blue questions Kisshu’s loyalty and Kisshu explains that he merely wants to see his true form. He theorizes that Deep Blue is not a real being at all and is more like an embryo that has yet to be born.

He wants to awaken Deep Blue so he’ll truly have the power to save his people. He willingly accepts whatever punishment Deep Blue has for him, even death, since he did it for the sake of his people. However, Deep Blue agrees to his plan and merely commands him to get him more power from the Mew Aqua.

Meanwhile, Shirogane and Akasaka find that they cannot revert the Mew Aqua Rod back to its original state, so they store it in a safe in the basement.

After spending some more time alone with Aoyama, Ichigo arrives at the cafe to start her shift. She believes her friends will be mad at her for being late again, but they’re surprisingly okay with it since they believe she was dumped the night before and was too distraught to come in on time.

She clears the air and all of the girls are happy for her. However, they quickly become surprised and embarrassed when Ichigo reveals that Aoyama is actually with her at the moment and wants to try some cakes.

As Ichigo dresses for work and Aoyama browses the menu, there’s a sudden alien alert. Kisshu, Taruto and Pai have finally caught on to the location of the Mews’ base, and they’ve come to take the Mew Aqua. Shirogane knocks Aoyama out with a drug and puts him in a safe place to allow the girls to transform and battle the aliens.

While Pai and Taruto distract the other girls, Ichigo runs to the backroom where Kisshu has attacked Akasaka and Aoyama. As Ichigo’s about to be attacked while protecting Aoyama, Pudding blocks the attack with her Pudding Ring Inferno.

However, she quickly blabs that Akasaka went off to get the Mew Aqua Rod in the basement to help defeat them, incidentally telling Kisshu exactly what he needs to know. Kisshu halts Akasaka in the basement. Akasaka tries to throw the staff to Ichigo, but Kisshu intercepts. Thinking he’s won, he’s astounded when the staff suddenly stops shining.

Akasaka states that Mew Aqua is merely a container for energy not a generator of energy. Ichigo must’ve used up all of the Mew Aqua’s energy from the staff in the battle the night before, thus it’s now mostly useless. Realizing this whole plan was for nothing, Kisshu attempts to unleash his rage at the girls. However, Ichigo won’t even let him get an attack off and Ribbon Strawberry Surprises them away from the cafe.

With the cafe now in shambles, Akasaka and Ichigo move Aoyama to a nearby field. Ichigo feels regret for getting him wrapped up in trouble again. She’s about to kiss him in his sleep, not even caring that her ears and tail have popped out again, when she realizes that the transformation is not stopping and she’s been turned into a small black cat.

– The girls faces after Ichigo says Aoyama and her confessed their love for each other are priceless.

– Is there any particular reason Aoyama was hiding behind the wall that whole time?

– Nice. They only show Ichigo transforming again. For a second, I forgot who the only Mew who mattered was.

– And of course the others are relegated to being a mostly-off-screen distraction.

– Pudding saved Ichigo? One of the other girls served a purpose? Wha-wha-wha?

– And she ruins the moment by being a blabbermouthed idiot. Hooray.

– If Ichigo can jump from the top of the stairs to the bottom without issue, why did Akasaka risk the staff at all by throwing it?

– Speaking of the Mew Aqua Rod, why is that necessary? They’ve beaten the aliens tons of times before without the staff’s help. Will you even let them battle for more then 45 seconds without breaking out the thing you put in hiding to protect it from these very beings?

– Why is the staff just now losing its shine? And surely Akasaka and Shirogane had to have known the staff was completely out of power or nearly out of power when they put it in the safe, so why even get it out to begin with?

– Here we get more Ichigo favoritism with her new full cat transformation. One could argue that this isn’t favoritism since it’s really something bad that happens to her, but it’s still more Ichigo focus. It’s still another ability she gets that puts more spotlight on her. It’s still a power added to her character to create more tension.

Just as none of the other girls have any animal features pop out when they’re excited or distressed, none of them ever fully transform into their given animals either (not counting Lettuce turning into a mermaid since that’s brought on by Mew Aqua and only Mew Aqua), which would actually be pretty interesting a la Fruits Basket.

Events like these make me truly wonder why the other girls even exist other than to pad out the series. All they seem to exist for at this point is support for Ichigo, whether in or out of battle, and whether their support even matters or not (see: stupid barriers that are never shown to do anything) They’re at an extreme point of stagnation already, and we’ve only reached the halfway point in the series.

I like the first half of the episode much more than the second. The first half seems like episode 26 runoff while the second seems like a filler episode crammed into 11 minutes. Aoyama and Ichigo’s confessions were very well written and directed, and Kisshu dealing with the aftermath of his plan, as well as showing a bit more of his gentler side with how much he’s devoted to his people, was also well done. It’s odd that the villains were more informed and prepared than the heroes this time around yet they still lost.

I’m still slightly bitter about the cat thing. Not as much as the Mew Aqua Rod or the Rose Bell (Upgraded Strawberry Bell), but still. That bitterness will honestly have to wait because this ability is a source of a lot of confusion and ridiculousness to me. But let’s save that for the next two episodes.

I will ask why Ichigo turns into a pure black house cat when her animal is an iriomote wild cat. If her logical transformation isn’t convenient to the plot or the aesthetic of the show, either don’t make the power or don’t give her that animal as her source of power.

Next episode, Ichigo, now a cat, tries desperately to turn back to normal. Aoyama picks her up and decides to take care of her. Will she ever be able to turn back to a human and escape without Aoyama finding out who and what she is?