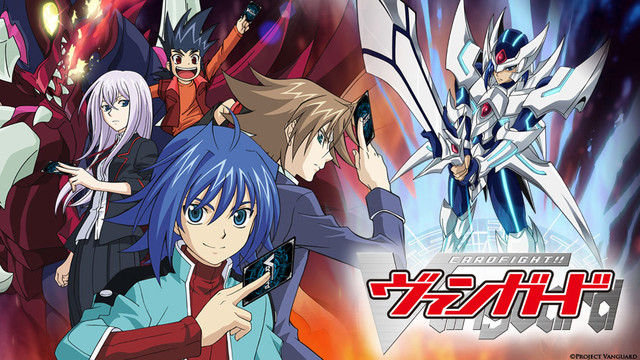 Plot: Trading card games have become incredibly popular over the years, and there’s one game that stands as the most popular – Cardfight!! Vanguard. Kai is the best around, but finds he’s bored with battling even the toughest players in town.

A very shy and timid boy named Aichi truly loves the game, but he’s never really battled before. He just likes the cards. One day, his most prized card, Blaster Blade, gets stolen by a bully and then lost on an ante battle to Kai. Aichi challenges him for at least the chance to win his card back. Graciously, Kai lets Aichi borrow Blaster Blade since he’s new to the game and even explains the rules as they battle. But is Aichi’s bond with Blaster Blade enough to defeat Kai?

Breakdown: Shounen gaming anime. So we meet again. Like I’ve mentioned before, I sure do have a soft spot in my heart for shounen gaming anime and I’m glad to say that this is one of the better anime in recent memory. Why? Because they take it easy.

Sure, the monsters do show up as actual creatures and implement real attacks, but the thing is that all of the battles, so far anyway, are merely in their imaginations. Now, you might be thinking ‘Wow, that sounds really…..stupid.’ And it’s understandable that you would think that, but consider any time that you’ve played a trading card game such as this. A lot of people do the same thing. It’s just illustrated for the audience here.

As I was saying, they take it easy. At least so far. The game is just a cool game. They have fun with it, but they’re not going over the top or going bonkers with ‘the world rests on our ability to play a card game’ stuff. The worst that happens is that Aichi gets beaten up for a rare card, and, in my experience with Pokemon and Yu-Gi-Oh cards back in the day, that’s, sadly, not unrealistic.

They also do a pretty great job introducing the characters. Kai’s a very skilled player and a stoic character, but he’s definitely not an ass like most characters in his archetype tend to be. He has mercy, he enjoys the game and he helps people out. He has a couple assy moments, but they’re not that bad, and one of those moments turns out to maybe not be assy.

Aichi is also likable since he’s not the big loud undefeated newcomer that usually is the main character trope in these shows. However, he might have the stink of ‘prodigy newcomer’ on him. He really loves the cards and seemingly is very interested in playing the game, he just has trouble making the connections to actually battle people.

Even the bully in this situation, Morikawa, wasn’t over the top Muahahaha villain-esque bully. He was an idiot brute who uses force to try and reclaim whatever honor he thinks he has.

The only bad character so far to me is Taishi. He’s Kai’s ‘friend’ and really his only role in this episode is to make fun of people and crack jokes that aren’t funny.

Since Aichi is (seemingly?) a complete newbie to the game, they do a very thorough job explaining the game to the audience without shoving exposition in our faces. It’s also really not a complicated game at all, and I’d like to give it a try some time.

The art is obviously pretty simplistic and none of the character designs stand out well, but the animation isn’t too shabby, especially for this genre.

The music’s alright and fitting, though the OP and ED really haven’t hooked onto me. Broken Engrish abounds, too.

Congrats, we have another Shounen Step-By-Step contender! This show seems to be off to a great start. I really love when shounen gaming anime just have fun for the love of the game, and I really hope it keeps up.