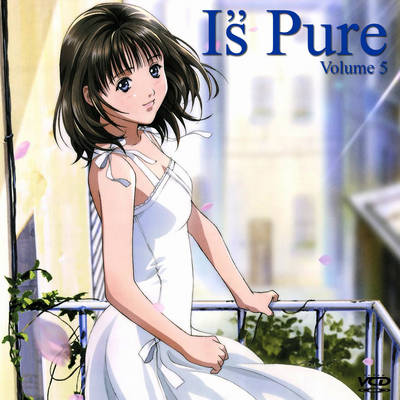 Plot: Seto Ichitaka has been in love with Iori for a long time, but he could never get up the nerve to tell her how he felt. This six episode OVA follows Seto and Iori through various trials in their relationship. Will Seto ever get his dream girl?

This OVA proceeds another OVA called From I’s, but I’ve yet to see that. It doesn’t seem like this OVA is a sequel or a situation where you need to do homework, so I’m taking this at face value.

The relationship between Iori and Seto toggles between a crush and borderline stalkery. Seto is very much stalkery and creepy in his adoration of Iori. He truly does love her, yes, but he’s creepy. He’s also a bit of a jerk, and this gets progressively worse as the episodes go on.

Want an example? Okay. He finds out that his childhood friend, Itsuki’s, house has gone up in flames and Itsuki’s missing, but he decides that he wants to stay on his date with Iori instead of seeing if she’s not a smoldering pile of side character.

The plot is also fairly Three’s Company-ish and predictable. For example, Teratani, Seto’s best friend and cool guy/pervert, gives Seto a picture of a naked girl that’s digitally manipulated to have Iori’s face on it. Instead of ripping it up, he accepts it and guess what happens. She finds it. Oh and finding out that he had it (In his schoolbook, no less) made her quite perturbed.

Episode five is just annoying. It introduces us to Iori’s manager, some woman whose name I’ve forgotten, and the instant, and I mean instant, that you see her you know she’s a Yayoi from White Album-esque villain. She’s a bitch and only wants Seto to stay away from her star. I should point out that they’re not even dating at this point – she just wants Iori to have no friends whatsoever, I guess.

Iori’s not much better. She’s one of those characters who never sees what’s blatantly obvious (even when, at one point, it is made as obvious as humanly possible) She’s not very likable after a few episodes. She’s not hateable, really, but there’s not much to like about her.

SPOILER ALERT. MOVE ON TO BOTTOM LINE TO AVOID SPOILERS. THANK YOU.

In the final episode Seto decides to actually listen to the manager and coldly break up with Iori to save her career that was never in any danger. Seto has a brief moment of slight scariness in saying that he’ll always love her from afar as his face is mostly in shadow….okay….*shudders*

Teratani’s brother randomly finds a website called The Marionette King, and all it says on it is that he’ll take Iori’s soul. This freaks Seto out, even though celebrities always get vague threats and weird messages, especially over the Internet. He decides he’ll be her secret bodyguard. And by ‘secret bodyguard’ I mean ‘stalker’.

He starts training himself through martial arts books and camps out in front of her studio in a hoodie with a pair of binoculars watching Iori all day…..I checked, this isn’t a horror anime.

The Marionette King does show up. I won’t explain who he is, but his appearance and motive make no sense. He should be targeting Seto, not Iori. He gets the jump on Seto and slams his head into the wall. They fight some more and Seto knocks him off of the roof where Iori’s bodyguards grab him after he spouts psycho nonsense. Seto then plops onto the roof in a small puddle of blood from his head wound.

Cut to the hospital, Seto is in a coma and the doctors can’t figure out why. I’m not Dr. House or anything, but I think it might have something to do with the severe concussion he got from his head slamming into the wall.

They say his life will be in danger if he doesn’t wake up soon, so Teratani and his friends decide to go see Iori at the big important play she’s acting in. They beg Iori to go with them, explaining everything that happened because of her manager, that Seto still loves her with all of his heart and that he really needs her right now. Yayoi (She’s given no real name that I know of, and she’s basically the same as her, so I’m calling her Yayoi.) gives the same stupid grin she’s been giving since her debut and shoos them away even after hearing that someone’s life is in danger.

What’s even worse is that after she hears that Seto got hurt while trying to protect Iori from the psycho, she smiles and says her bodyguards were the ones who caught the guy, so his efforts were pointless, which they weren’t. They never would’ve known about the Marionette King if Seto hadn’t gone after him. Though I do have to say that Seto got really lucky. All that was said on that webpage was that he’d take Iori’s soul. He didn’t specify a time or a place, yet he seemed to know exactly when and where he’d strike. He also targeted the first creepy-looking guy that he saw and got lucky there too.

Iori actually doesn’t go with them despite their pleas and hearing that the man she loves and risked his life for hers is dying because of her. Wow. That was actually unexpected. Unexpected and ungodly horrible.

Later, back at the hospital, Iori calls, wanting to talk to Seto. Apparently her reasoning was that she didn’t want to disappoint the people in the play or the audience by leaving.

Boy, way to have your priorities straight. Your loved one is in a coma, dying, for trying to protect you from a psychopath and you can’t even ditch a play to see him? Who cares about the people at the play?! Don’t you have an understudy? That’ll be a great story to tell your kids. “Mommy, tell us again about how you ditched Daddy for a stupid play as he was dying after saving your life.”

Oh and get this, she even said that after this play that she’d quit acting. If you’re gonna give it up anyway, why not leave the damn play!?

And before you can say “Don’t you wake up, you damn bastard. That’s way too cliche, way too overdone, way too corny, way too lame” he wakes up after hearing Iori’s voice on the phone. I was seriously rooting for him to either not wake up or flatline right there just to slap Iori in the face for not going to him personally.

The main couple’s okay, but they’re not very likable. I was never rooting for them (I liked him with Itsuki, and it would’ve been much more interesting if we started out with SetoxIori but moved to SetoxItsuki. It would also be more realistic and not computer-chair-gnawingly cliche.)

The plot’s very convoluted and stupid at times, and in other times it’s a chore to sit through.

Art and Animation: The art and animation are a high point for the series. It’s all very clean and fluid. The art alone is simply very nice to look at, but nothing very awe inspiring.

Music: The music was decent. The OP was okay, and the BG music was alright.

Voice Acting: Japanese – The voice acting was fairly well done. I had no real complaints.

Bottom Line: Like there are turn-your-brain-off action movies, this is a turn-your-brain-off romance/drama series. However, even then, it’s nothing to write home about. Also, I still feel uneasy about how stalker-y he is sometimes, and that ending is so cliche and cheesy it’s silly.

Additional Information and Notes: I”s Pure is the sequel to From I”s. It was based on a manga written by Masakazu Katsura, who has also written Zetman, DNA2 and the Video Girl series. It was directed by Mamoru Kanbe, who has also directed numerous episodes of Cardcaptor Sakura and Elfen Lied. It was produced by Studio Pierrot.

Recommended Audience: There’s some sexual themes, but no one even kisses. Some fanservice, one sexual assault scene, no swearing, no gore or anything. 13+