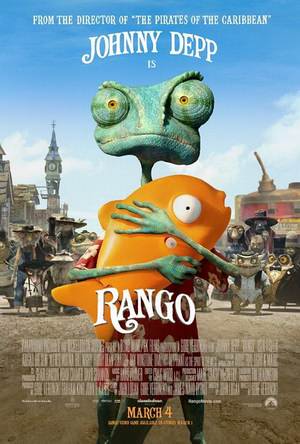 Plot: A pet lizard finds himself lost in the desert after his tank flies off of the back of his owner’s car. He arrives at a town called Dirt where water is scarce to say the least. He plays himself up as a hero of the west to the local townsfolk, and after (accidentally) saving them from a hawk. Because of his feats, he’s given the title of Sheriff by the mayor. Taking the name of Rango, he enjoys his newfound respect and admiration but when the situation gets dire in Dirt, he’ll have to pay up or shut up.

Breakdown: I was never a fan of westerns, unless you count space westerns. And despite being interested in this movie when it was first released, mostly because Nickelodeon promoted it quite a bit (They produced it, but it’s hard as hell to find their name on it) I never got around to watching it until now. Too bad too because this is a pretty damn good movie.

Admittedly, the story is completely overdone. Some guy pretends to be something he’s not only to eventually get ousted and then gather up the courage to return and set things right. Been there done that. And yes, the awkwardness of the continuous lying does irk me quite a bit.

However, I really love the writing of the dialogue, the timing of the jokes, the characters and the style. I can’t really compare this to any other animated movie that I can think of. It’s pretty unique in its own right, at least barring the story.

One of the ways this movie stands out is its art and animation. Rango was produced by ILM (Lucasfilms) and it is absolutely gorgeous…..I think I drooled a little.

Excuse me, I really should say it’s butt ugly, but it’s meant to be gritty and kinda ugly. It’s a western with a bunch of desert animals like rats and lizards. Even the love interest, Beans, that’s her actual name, is pretty blech-looking. But my god, the details. They are fantastic. From the littlest drops of water and the hairs and scales on the animals to the town of Dirt and the vast desert. It is all just deliciously…..Ugligorgeous. What’s even more incredible is how they integrated the human world into their own world. The cars and lights look fantastic, we’ve got a huge cityscape, and even stuff like the items in Rango’s tank are beautifully detailed.

Then we see one human character briefly, The Man With No Name; IE A Clint Eastwood ‘Spirit of the West’ character who guides Rango back on his path. And not only is he also incredibly well-detailed, but his part is probably the least cliched because he doesn’t do that lame ‘just believe in yourself blah blah’ speech. He gives a realistic speech that a Clint Eastwood character would probably give. Sadly, however, they did not get Clint Eastwood to play this part, but he was well-performed by Timothy Olyphant.

They also didn’t dumb down most of the scenes for the sake of the children. Characters get shot, they die, they swear (to a degree), they describe several gory situations and the dialogue is perfectly suited for older audiences as well as young ones. Which is weird because somehow this movie managed to grab a PG rating.

In regards to characters, they’re all kinda stereotypes, but they’re done in a fairly unique and memorable manner. Johnny Depp (hey, you broke away from Disney and Tim Burton for five seconds! Congrats!) plays our titular character, Rango. Interestingly, his real name, the one he would’ve been given by his owner, is never mentioned, which kinda makes him a legit ‘man with no name’. He named himself through the traditional means of reading it off of something he saw.

He’s a bit of a delusional chameleon who longs to be a big popular hero, but he’s lived all of his life in a tank with no one to interact with except a wind-up goldfish and a barbie doll torso. It’s actually a little sad to think that his owner might be devastated over losing his pet, but Rango never mentions it or seems to care.

Rango’s one of the most uncomfortable characters to watch because he’s lying through most of the movie, and he plays up his lies as much as possible in order to fully create a heroic sheriff persona, but he really is a good guy who wants to help the people of Dirt.

Beans isn’t all that interesting. She’s a typical ‘no non-sense’ female lead whose only schtick is her defense mechanism. Beans is a desert iguana and she has a defense mechanism that essentially causes her to freeze up and be completely unaware of her surroundings. Problem is, this ability sometimes springs up without warning or trigger. She’ll just be talking and then boom. Then she just transforms into a doting girlfriend at the end, and it’s actually a little annoying.

Priscilla, the cactus mouse, steals several scenes with her odd habit of being incredibly and painfully blunt about situations and going on small tangents about frightening or gory situations.

Then there’s the mayor who is about as transparent as humanly possible. It’s obvious that he’s behind the water shortage in the town yet it takes Rango to finally figure it out and call him out on it. He’s not much of a villain, but there is someone who actually earns the villain title; Rattlesnake Jake.

As you can guess, Rattlesnake Jake is a rattlesnake. A huge rattlesnake….with piercing almost glowing orange, yellow and red eyes, huge fangs…..and that’s about it…..

Oh there is his KICK-ASS MACHINE GUN TAIL. Oh my god, I never knew I needed a movie with a rattlesnake with a machine gun for a tail in my life, but that part of me has been fulfilled now. He is a big, badass, looming bastard of a snake. Though the reason I really like him isn’t just how badass he is, it’s that he actually has some sense of honor. By the end, he’s basically an anti-hero.

The fact that everything looks more or less real along with stuff like guns and animal threats such as hawks really makes the movie much more intense.

And might I commend the movie for having the best end credits sequence I’ve seen in ages? The art, the direction, the style, the music; they were all awesome for that segment.

Bottomline: Even if you don’t like westerns, I’d say definitely give this movie a shot. It’s cleverly written, has a great realistic feel to it, is gorgeously detailed, has some fantastic music, intense action sequences and while it’s not the most unique story in the world, you never once feel bored while watching it. I had a lot of fun with this movie, and I’d gladly watch it several more times.

Recommended Audience: Mild swearing (hell, damn, maybe an ‘ass’ I can’t remember), guns, smoking, some people get shot but I don’t think anyone dies from a gunshot wound, a bird dies from being crushed, an armadillo ‘dies’ from being run over by a car (and ew they closeup on his squished body, even though, oddly, there’s no guts or gore, it’s like someone flatted a balloon filled with flour) ‘scary situations’ maybe. 10+