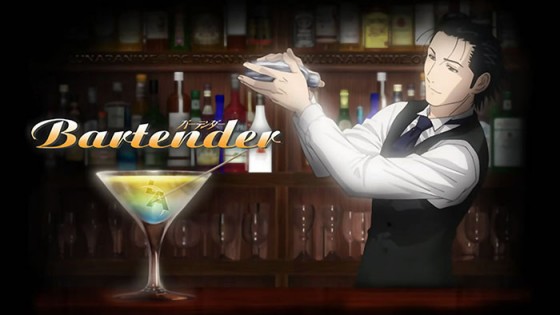 Plot: A secluded warm bar called Eden Hall welcomes its guests with a mysterious drink they call The Glass of the Gods, a drink that is perfect for your particular troubles. The master bartender and owner of Eden Hall, Sasakura, uses his keen observations, insight and gentleness to help customer’s through their problems.

Breakdown: We all know the bartender trope. Bartenders are kind and friendly people who offer solutions to problems or just to lend an ear while pouring you a nice drink. Well, what if there was a show about that?

I don’t think Bartender is the greatest candidate for Episode-Oneland since it seems pretty episodic to me at first glance, but the main focus of the whole series is indeed the Bartender.

Ryuu Sasakura, one of the best bartenders in the world, tends bar at Eden Hall. He makes spot-on observations and analyses on completely minor things like Detective Conan and makes perfect drinks to sate the worries of the customer. And yes, in this episode anyway, the customer’s problems were seemingly solved just by making the guy a really nice drink.

The customer in this episode is a man who has been contracted out to renovate a hotel bar. However, he despises bars and especially has a poor view of bartenders as pretentious people with no real skills and even refers to them by the ‘slur’ of ‘barten.’ Despite this, he seems to have a vast knowledge of drinks and liqueur as a whole. He enters Eden Hall through chance and has a complete 180 on his opinion of bars and bartenders after meeting and getting a Glass of the Gods from Sasakura.

That’s the whole story. No, I’m not kidding.

Also, the reason behind this man’s hatred of bars and bartenders is kinda dumb. When he was a college student, he went to his first bar. He chose one of those fancy-ish bars and went alone, so he’s already making all sorts of mistakes for a first-time run.

He feels really uncomfortable right as he enters the door, noting the door’s heaviness as feeling like the bar is actively trying to keep people out. He’s appalled at the high cost of a bowl of nuts and feels like an outsider for not being there on a recommendation.

He orders a beer and feels like a cheapskate for doing so. He orders a whiskey in order to feel more proper, all the while believing everyone in the room is either silently judging him or laughing at him. He reaches for his wallet and finds that it fell out of a gigantic hole in his pocket that I can’t believe he’s just now noticing, and then believes everyone in the bar is staring at him, laughing at him, judging him and whatnot. The bartender then gently touches his hand and tells him that they can settle the bill some other time.

So, yeah, he hates bars and bartenders because he’s a paranoid crazy person and had a slightly embarrassing experience with a bartender who was actually really nice about the whole situation.

This show puts a lot of focus on the, for lack of a better term, ‘psychology’ behind drinks and bars. Drinks are highlighted and explored, we’re told when a drink is appropriate for certain situations, and we even get a legitimate recipe at the end of the episode.

More importantly, though, as Sasakura explains, why you drink what and when and when you’d be better suited for what drink over another depends on both you as a person and your current state of mind. A drink can be a soothing experience, a getaway, something fun, nostalgic etc. Most of all, the bartender’s job is to create an openness and gentleness to the patron’s experience, creating a safe and warm atmosphere for everyone who wants a place to go just to feel like they belong or when they want a hideaway.

The art is alright for the characters themselves and not much animation is needed with the people, but a lot of detail and fluidity is put on drink preparation and presentation, which is pretty nice. Plus, the environments are nicely detailed. The direction is also fairly stylized and pleasantly arranged.

The music is reminiscent of lounge music to a degree. I enjoyed it. It was very relaxing.

While the story is definitely different and, admittedly, a little on the odd side, I will say that I never lost interest and I did feel relaxed through the whole thing, which may be one of the main points of this anime – to emulate the bar experience.

If anything, it’s a short and relaxing series and really makes you wish more bars were like Eden Hall.

Edit: I have completed Bartender and will upload the full review soon.

One thought on “Episode One-Derland: Bartender”