Plot: Mokuba has been kidnapped by Pegasus in order to take over Kaiba’s company. Desperate to save the company and his brother’s reputation, Mokuba escapes and steals a duelist’s deck and star chips to challenge Yugi so that Pegasus can’t duel him and win control over the company. Yugi and the others have thirty minutes to help the theft victim or he will be forced to leave the island with the other people who lost their star chips.

The words “Funny Rabbit” were edited off of the comic Pegasus has. Because English is evil too. Oddly, though, they also add a picture of Funny Bunny to the cover. Pegasus’s wine was dialogue changed to fruit juice. Because alcohol doesn’t exist…I can understand editing out smoking and alcohol if a good character is doing it (prevent kids from imitating their favorite characters) but doesn’t a villain doing those things insinuate that they’re bad?

Both versions clearly state that those without star chips must leave the island…Again, why is no one bothering to take away Anzu/T’ea, Honda/Tristan and Bakura?

I love how Pegasus obviously has cameras all over the island yet he can’t/won’t catch cheaters. Anyone could steal star chips this way as Bandit Keith and Mokuba show…Then again, Pegasus is a cheater too…

I also love how they arrange a luxury cruise liner to bring them to the island, but only have a rowboat to get them off.

They edit out Jonouchi telling the kid that if he finds his chips that he has to give him half. Makes the entire scene where it transitions from heroic to exasperated groans incredibly awkward.

Jonouchi doesn’t insinuate anything about Yugi’s Millennium puzzle in the original. It’s like 4Kids is constantly dropping hints at the fact that there’s a different spirit in there. As if the transformation sequences every episode weren’t a freakin’ clue.

They impose a Millennium symbol on Yugi’s head right after Mokuba puts his chips down, and T’ea follows it up by saying it’s like Yugi is looking into his soul….We get it, 4Kids, the damn necklace is magic. We’re picking up what you’re slamming down. In the original version, Anzu just says that Mokuba doesn’t have a duel glove, thus he must be the criminal. 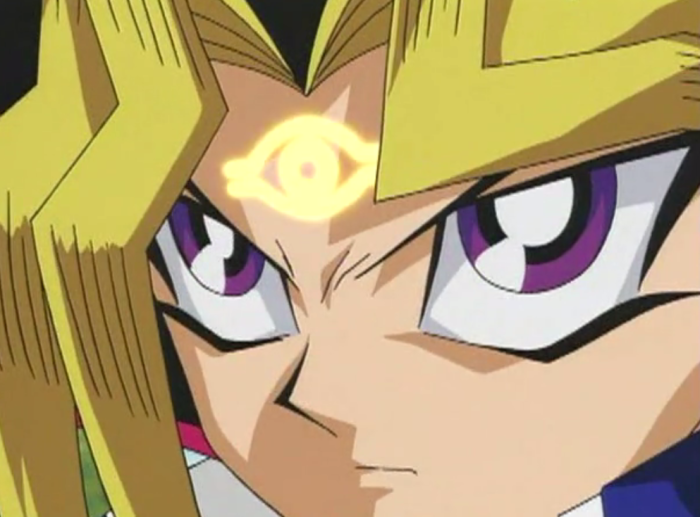 In the flashback, original version, Kaiba says he needs to learn of the heart of the cards in order to be as good as Yugi. Then he gives Mokuba a secret key card that allows access to numerous company files and secrets that he’s meant to protect while he’s away. (Yeah, leave a little kid in charge of a multi-billion dollar company. That’s smart. Hope he doesn’t get kidnap—oh wait.)

In the dub, they strangely omit this. Kaiba just says he’s not himself and needs time away to think. He gives Mokuba a card claiming it was his favorite, never showing what it is, and then leaves. I also don’t like how Kaiba’s constantly calling his brother “kid” here. They’re closer than that.

This is kind of a big deal, because that card is the whole focal point behind Mokuba’s kidnapping. They kidnapped him to find out where the key card was. In the dub, he’s kidnapped because they want to control him because only a Kaiba can give orders in his company. The original version makes more sense, but I guess they didn’t want to associate cards with kidnapping…No wait, cards are associated with all sorts of bad crap in this show, so I guess it’s just pointless.

I find it hard to believe that a kid who was brought up in a company that focuses on Duel Monsters and is the brother of the world champion of Duel Monsters doesn’t know the main basics of Duel Monsters. If a monster’s attack points are lower than your opponent’s monster’s, you lose. You had to have picked up at least that much just by watching Kaiba duel once or twice.

Again, they impose a Millennium symbol on Yugi’s head to insinuate that he’s using his powers in the dub, when in the original, he’s not. Because Yugi’s so stupid he needed magic to figure out that was Mokuba. What with his clever disguise of wearing the exact same clothes he was wearing the last time Yugi saw him, pulling his scarf over his mouth and wearing a hat, he should be in the CIA. 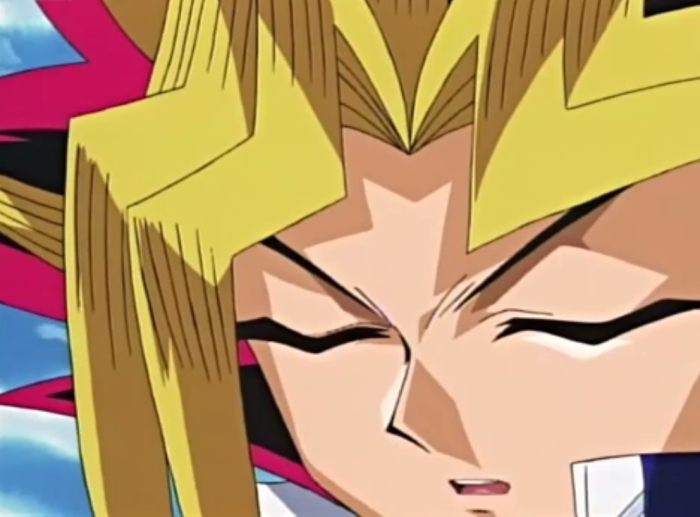 In the original, the Big Five, as they’ll later be called, says they’ll talk with Kaiba about the arrangement with Pegasus. In the dub, they want Kaiba out of the picture, AKA killed.

Dub!Mokuba: “If I can’t beat you *grabs two of Yugi’s star chips* I’ll have you disqualified!”

…..Because Yugi losing two of his five star chips means he’ll be disqualified? What?

I don’t know why, but they edited in a scene of Mokuba looking down and sad just to say “Let’s do it” right before they transition back to the boat.

Kaiba’s scene at his hideaway is edited in to before when Yugi and the others arrive at the docks.

4Kids edited in the goons knocking at Kaiba’s door by basically cutting out the door and quickly animating a zoom-in and out a few times. Because it’s rude not to knock dammit! They do this twice, by the way. Once after Kaiba glances at the door and another before he places the duel disks in the briefcase.

The infamous guns changed to pointing fingers scene. And yes, it still looks ridiculous. They also edited out the scene where he fires the gun at Kaiba, and they edited out the shot of Kaiba falling. I do have to say Kaiba saying “You’ll never take me alive” still tickles my funny bone. I will admit, their cut of Kaiba blocking the bullet is impressively done. You’d never notice there’s a (literal) shot missing from that. 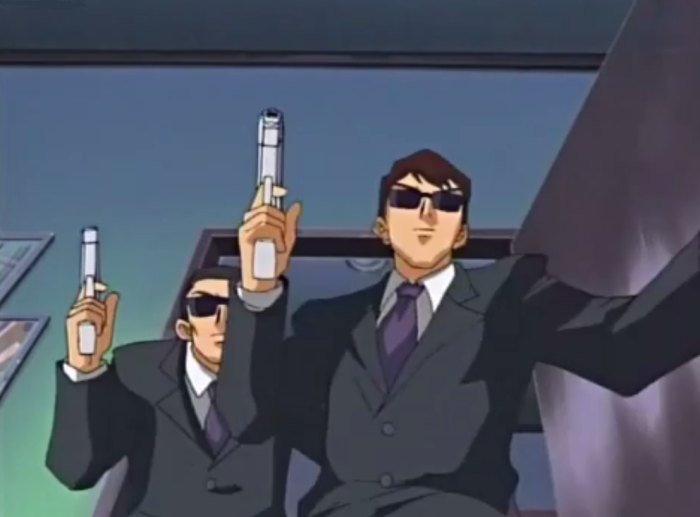 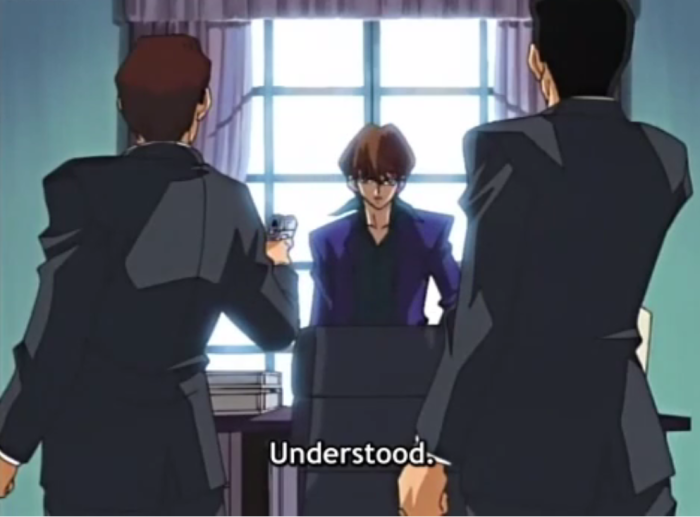 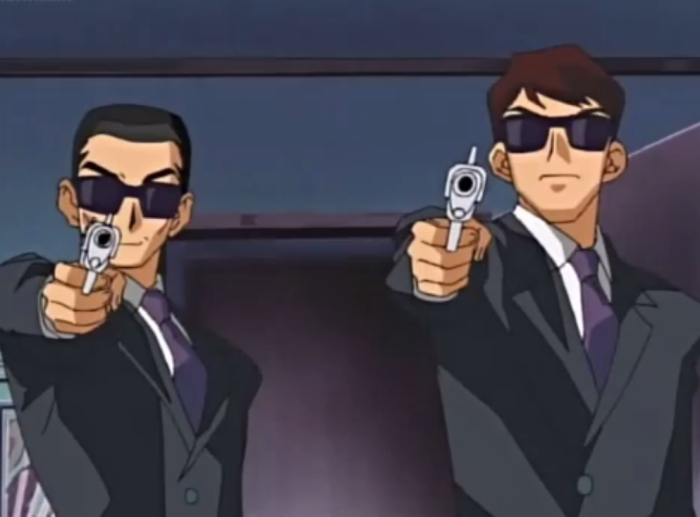 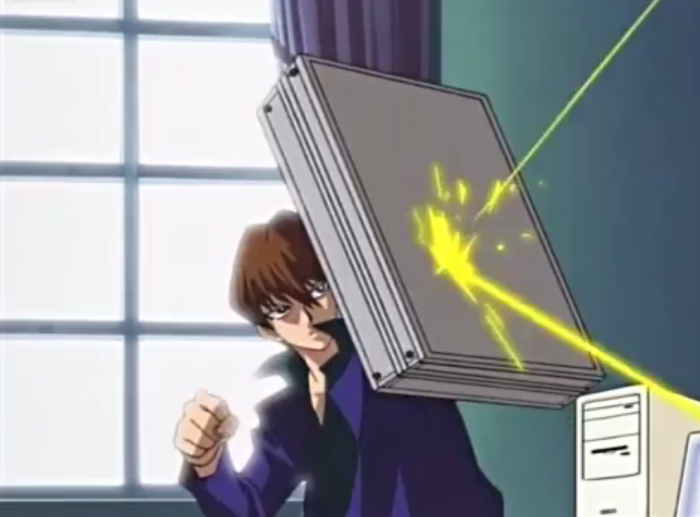 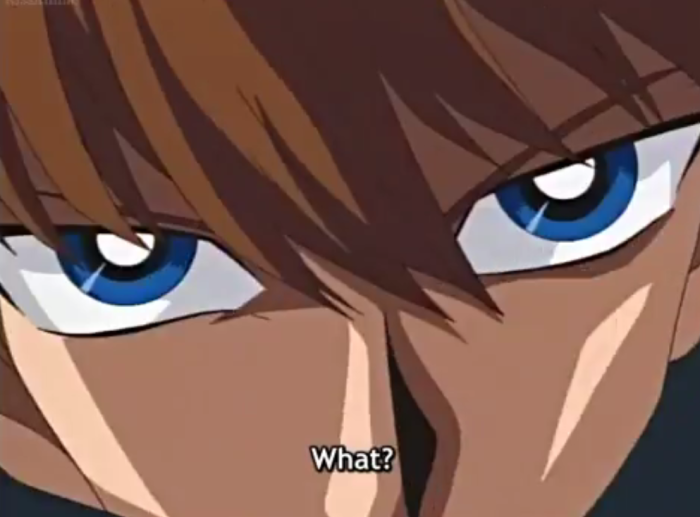 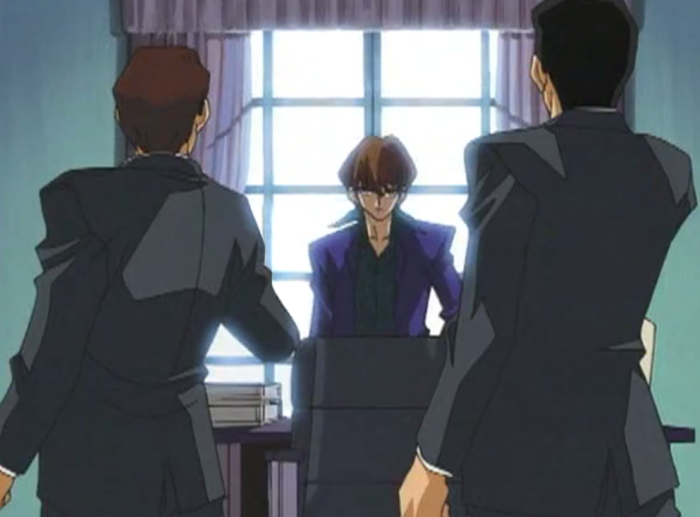 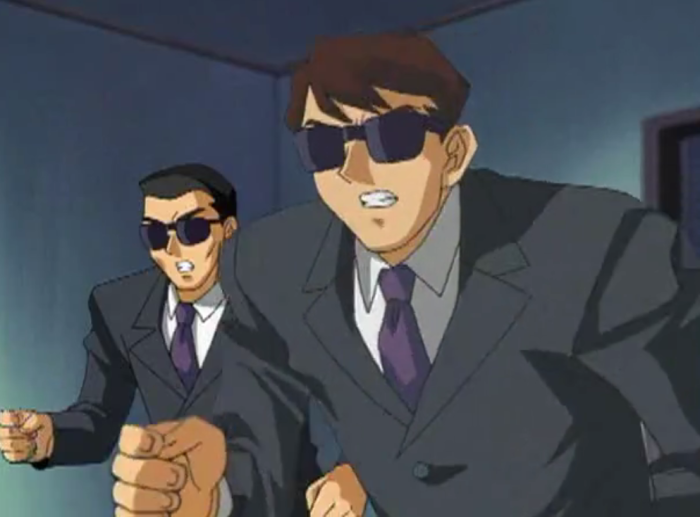 I don’t think I have to tell you that fake-Kaiba doesn’t make puns in the original version. In the original, he just says “I have to have revenge” over and over.

This episode was okay. I think it was a little bit of an excuse to get rid of some of Yugi’s star chips to give him more duels to compete in. However, it does show how dedicated Mokuba is to his brother and introduces us to one of the weirder duels of the show.