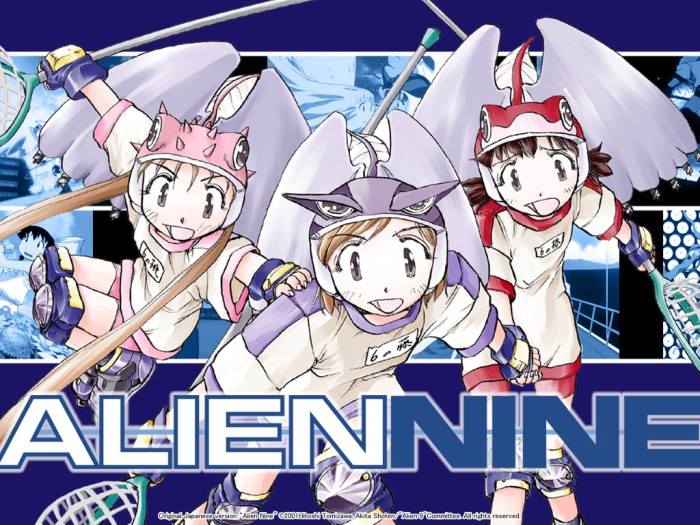 Plot: Aliens invaded the earth some time ago, and now schools are tasked with selecting three people from each class to be Alien Fighters. The Alien Fighters are given borgs, frog-like aliens with wings and drill-like cables that sit on their heads and act like their protectors.

Yuri Otani, the world’s biggest crybaby on the face of the planet, is selected as being one of the three Alien Fighters for her class, because I guess they just wanted to pawn the job off on her, along with Kumi, a strong independent fighter who is seen as the mature one in the group, and Kasumi, who couldn’t be more excited to have the job. While much of their job is seen as busywork, the aliens do pose a threat far greater than they’d ever imagined.

Breakdown: This is one of those shows that starts off rocky but ends up leaving you wanting so much more.

I first thought this series to be some parody of alien apocalypse anime. I mean, come on. Logistically, this makes no sense. Aliens invade, and instead of military involvement, police or anything, they assign three kids from various elementary school classes to take care of the aliens and roam around the school grounds armed with rollerblades and said borgs.

Also, they’re not allowed to kill the aliens. Well, they are allowed, but they’re strongly urged to merely tranquilize the aliens and bring them into some pen at school. The reasoning is that they’re living beings too and they should respect their lives, but when they’re the ones trying to kill you……well, they obviously don’t respect your life so….

However, when a borg senses that their master is getting too scared of the threat and believes that they will die, the borg freaks out and kills the threat. Guess who sets this action off….twice. Just guess.

Yuri is our main character, and I swear to god if you thought Shinji from Evangelion was a whiny twat, you’ve never seen Yuri. She does nothing….and I mean nothing….but whimper and cry and say she’s scared. 99.9% of her screentime is that. I’m not even kidding.

You may see her smile once or twice, but it’s that awkward smile where your brow is still furrowed and it seems like you’re fake smiling to fit in. Even when she’s not on alien duty, even before she got picked, even when she’s just having fun on summer vacation with her friends, she was a whiny little cry baby.

I give Shinji and Yuri some leeway because they’re kids who were thrown into very dangerous situations and told to fight aliens who may very well kill them and their friends. However, there’s only so far I can go with that, and Yuri crosses that line so, so, so much. Considering she was this way before she even got selected, I give her even less leeway.

What’s worse is that, by the end, she’s not much better. She watches one of her friends getting attacked and does jack about it because she’s too busy whimpering. The only reason she does whatever minute thing she does at the very end is because Kumi was quite literally holding her hand.

She’s such a detriment to the team that I really wonder why no one will let her quit or even just purposely kick her off the team. The only times she ever gets anything done is when her borg tries to protect her and sometimes kills the enemy when she gets too rattled. Give Shinji some credit, at least he fought when he had to most of the time.

I loved the hell out of Kumi because she was the only one willing to be completely blunt about how much of a crybaby Yuri is. She’s a little cold, but she lightens up by the end.

Kasumi was pretty okay in the first half, but working my nerves in the second because of how happy-peppy she is and how she constantly says “NYA!”

Miyu, Yuri’s best friend, was also a good character though she had little in terms of personality.

While this show started out seemingly lighthearted, especially considering the artwork, it gets pretty dark, particularly the final episode. I was pretty surprised by the sudden turnaround from “being an alien fighter means you get to skip homework!” to sudden alien massacre, psychological warfare and conspiracies.

I won’t spoil the ending, but it is a great advertisement to read the manga. That’s basically what this whole thing is – just a sneak peak into the manga because we learn quite literally nothing of what’s actually going on.

We don’t know who’s sending the aliens, why the teacher and principal seem to have something to do with it, why they seem to have borg-hair, why the Yellow Knife was sent, what he meant by “It was your fault” and, I’m going to give two major spoilers here, so fair warning;

At the very end, we don’t know if the Kasumi we see is actually Kasumi or something the alien made. And we see that Kumi, during the end credits no less, suddenly got attacked by something and supposedly murdered in the library. What the hell happened to her? And why was she on alien duty anyway if her borg was out of commission?

The reason I took points off was for that ending and for Yuri. She is one of the most annoying anime characters I’ve ever seen. If they made her grow some semblance of a pair near the end, it wouldn’t have been as bad, but nope.

I plan on reading the manga because I’m really interested to know what happened, so here’s hoping the manga does explain it.

Art and Animation: The art is………good, barring the faces of the people. They have huge eyes, which is usually fine, but they’re even big for anime standards. The eyes themselves also don’t look well-drawn, they’re craggy and awkward. They have small noses when seen from the front, but when you look at them from the side, no noses. Their ears are also huge. Barring that, however, the art is pretty good and the animation is very well done.

Music: The ending theme was nice, the OP was forgettable. Nothing much to say about the BGM.

Voice Acting: English – Everyone was great in their roles, even whiny Yuri. I will say I was distracted by Rachel Lillis, the voice of Misty from Pokemon, playing Miyu. Veronica Taylor, Ash and May from Pokemon, also plays their teacher, Megumi, but I honestly didn’t catch on that that was her. Miyu was sporting Misty’s voice clearly, however. I really only note this because I found it funny that Rachel Lillis, who plays Misty, was playing in an anime with a character named Kasumi. Kasumi is Misty’s Japanese name.

Bottomline: At four episodes, it’s definitely worth a watch, but Yuri was seriously pushing it with her whining and crying. It does end with a lot of questions left unanswered and even has a cliffhanger that basically forces you to read the manga.

Additional Information and Notes: Alien Nine was based on a manga written by Hitoshi Tamizawa, though he doesn’t seem to have anything to do with this OVA. The OVA itself was directed by Yasuhiro Irie, director of Fullmetal Alchemist: Brotherhood and Code:Breaker, and Jiro Fujimoto who directed some episodes of Wagnaria!!3, Samurai 7, Kaze no Stigma and The Familiar of Zero. It was written by Murai Sadayuki, who also wrote the screenplay for Steamboy, the script for Perfect Blue and even some episodes of Cowboy Bebop.

Alien Nine was produced by JC Staff, and is currently licensed in the US by Central Park Media.

Recommended Audience: Some dark themes, blood, blood and gore on the alien’s side (meaning pea-soup green gore and blood) a little nudity, but you don’t see anything, technically. It is full frontal, but they do the Sailor moon thing with it. No nips, no naughty bits. No sex, some swearing here and there, but no f-bombs. 14+