Card(s) of the Day: Silent – A card that absolutely hates noise, Silent has the ability to instantly silent anybody that is making noise. It can also remove them from the general area to ensure that the noise doesn’t return.

Plot: Sakura’s on a field trip to an art museum when she runs into a boy that is trying to alter one of the paintings that he states was defaced. When they find out that it’s really the work of the Clow card, Silent, it’s up to Sakura, Kero and Tomoyo to capture the card and restore the painting back to its former glory.

Title Change: Sakura’s First Attempt as a Thief is changed to The Mysterious Painting.

Before we see Sakura drawing Kero, the dub adds in a shot of the exterior of her house. I guess because we wouldn’t have realized that they were at her house judging from the fact that they’re in her room. Yeah, I could’ve sworn her room was moved to that museum we were just in. SO CONFUSING. D:

They cut out Kero bragging about his long legs when he’s telling Sakura what’s wrong with her picture.

After the scene with Sakura drawing Kero, we’re shown Sakura eating dinner with her father and brother. She’s explaining to them that she was drawing upstairs because she’s going on a field trip to the art museum. Toya asks why she was being so rowdy upstairs if all she was doing was drawing, and she says that she can’t draw properly unless she’s talking. Toya says that she better not act that way in the museum or else she’ll get kicked out. Her father reassures her that, though she should be on her best behavior, it’s unlikely that she’ll get kicked out for talking.

This entire scene is cut for reasons beyond my understanding. I have a theory that Nelvana doesn’t like Sakura’s father, but I could be wrong. It just seems like a lot of his scenes end up on the cutting room floor. 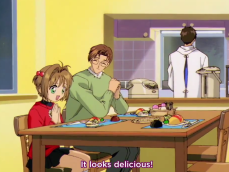 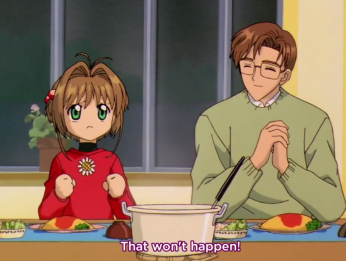 After Sakura whispers to Tomoyo about it being quiet in there, she smiles embarrassingly and scoots away. This was edited out due to Sakura making an anime-face. 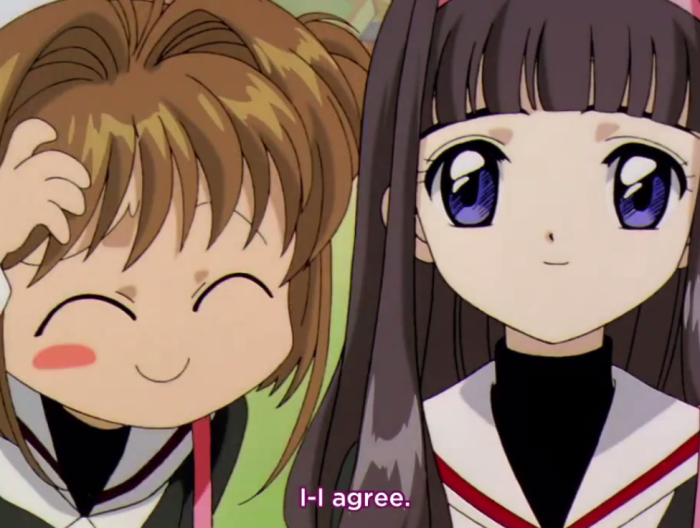 Before we see the drawing, Sakura has anime ‘cat eyes’ that are edited out. 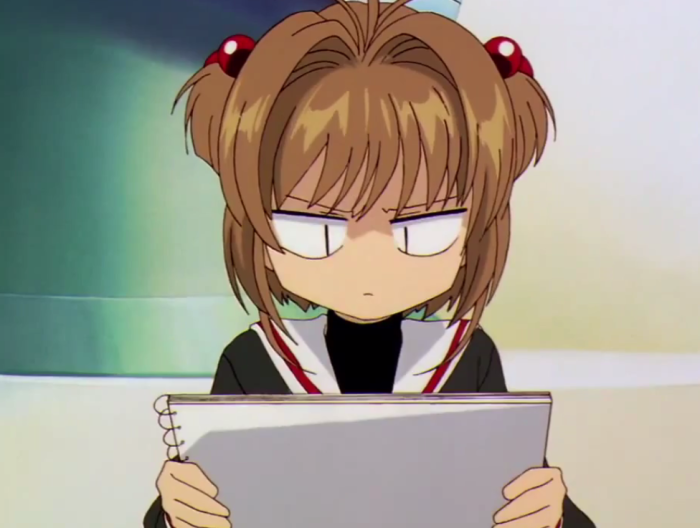 Nelvana actually made an edit that makes sense for a change. They edited out the Japanese text that was on Kero’s edited picture and replaced it with English text that reads “What I REALLY look like.” Which is actually very accurate to what the original written. 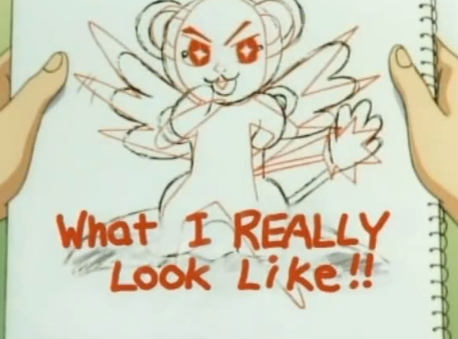 Name Change: The kid’s dad is named Tenkai Tachibana. In the dub, this is changed to Douglas Mills.

So we have a bittersweet moment of editing. The sign under the painting is edited clean of Japanese text and is replaced with another accurate translation, barring the name which was changed as I stated. However, about 30 seconds later, Sakura picks up a tag that fell off the boy’s bag. It reads “2nd Grade, 2nd Class, Yuuki Tachibana” In the dub, the scene where we see the tag is edited out. And they were doing so well too. 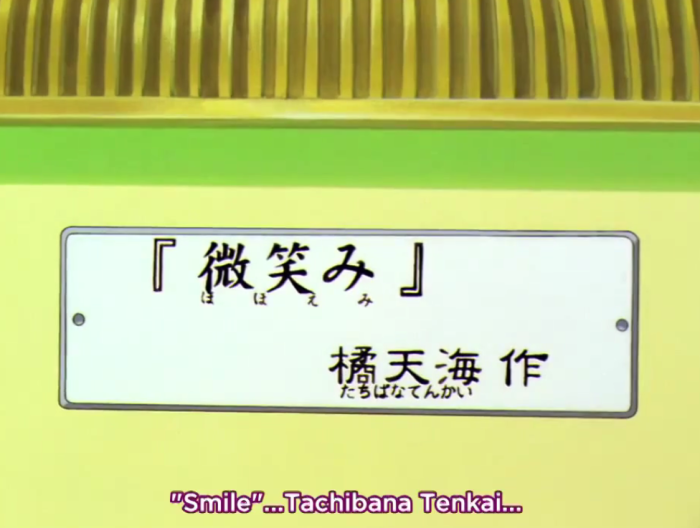 When Sakura’s telling Tomoyo about the incident at the museum, she states that it could be the curse of a dead artist and makes a creepy goofy face. She then follows this up with a cartoonish crying face because that would scare her. This is edited out due to cartoon-y faces.

They edit out a short scene after they presume it’s a Clow card where they realize that their class has left without them.

Well this is just confusing. In the original, the excuse that Sakura gives to Yukito as she’s leaving the house (Yes, they kept Yukito in a scene for a change. You may take a minute to change your pants since I’m sure they were dampened from surprise.) is that she’s going to look at the moon. Yukito gives her a knowing look and then says to not forget about the tons of stars out there. In the dub, this is reversed. She says she wants to look at the stars and he says to not forget about the moon. I don’t even…

Despite leaving most of Yukito’s scene in, they edit out where Yukito leans down to talk to her and Sakura blushing because he’ll keep her leaving a secret. Because crushes and all that. 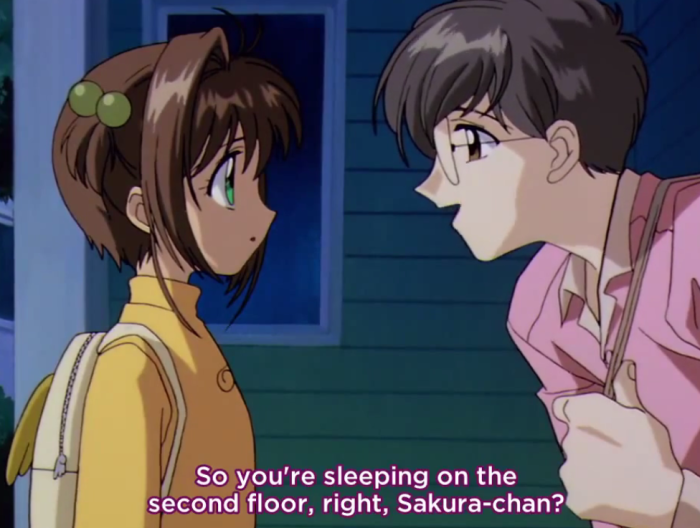 Huh, I probably should’ve picked a different line to get that screencap because that line makes Yukito look very creepy.

They also paint away her blush in the next scene as she sighs.

After Kero says that he doesn’t know what Silent’s other ability is, Sakura does one of those DOH falls. In the dub, they edit this out, making the scene look noticeably choppy.

Well, we go from disappointed in Nelvana to ashamed, they edit off the Japanese text (at least the stuff that is legible) from the security schedule for the museum. We don’t even get a close up of the paper. It’s completely pointless. 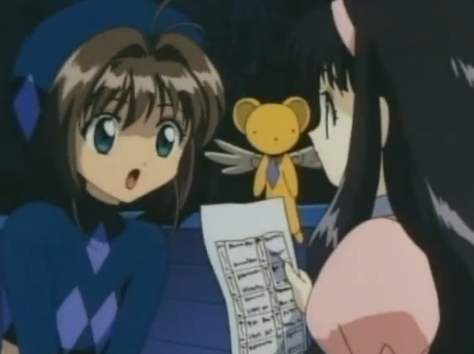 When Tomoyo sets her watch, there’s a noticeable delay before she hits the button that’s not present in the original. I feel like this was a cheap way of lengthening the episode by a few seconds.

When Sakura and Tomoyo are trying to explain themselves to the boy, Tomoyo mentions that they’re elegant thieves and would never tarnish the paintings. At the mention of thieves, Sakura makes a shocked face with dot eyes and says that they’re not thieves. This is edited out due to Sakura’s goofy face. 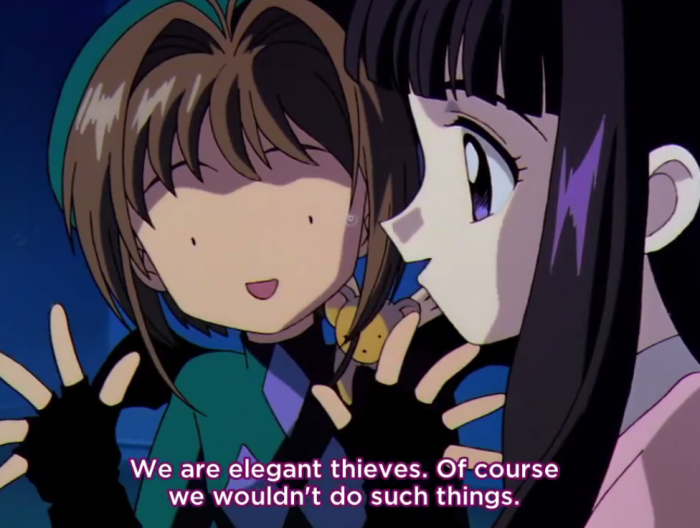 Nelvana, kindly stop screwing with me. Remember how that tag was edited out before? Well, after Sakura mentions the boy’s name to stop him from going, he asks how she knew his name and then we see the shot of the exact same tag, edited of course.

If you had no qualms in showing the tag, why did you edit it out in the first place? The only reason I can think of is to save money on editing, but if you wanted to do THAT you would’ve left the tiny map text alone.

Also, the tag only says “Alex.” It doesn’t mention his grade, class or his last name. Because only having a first name on it makes it so useful as a name tag. Why would the tag have been a clue at all if the last name wasn’t included on it!? 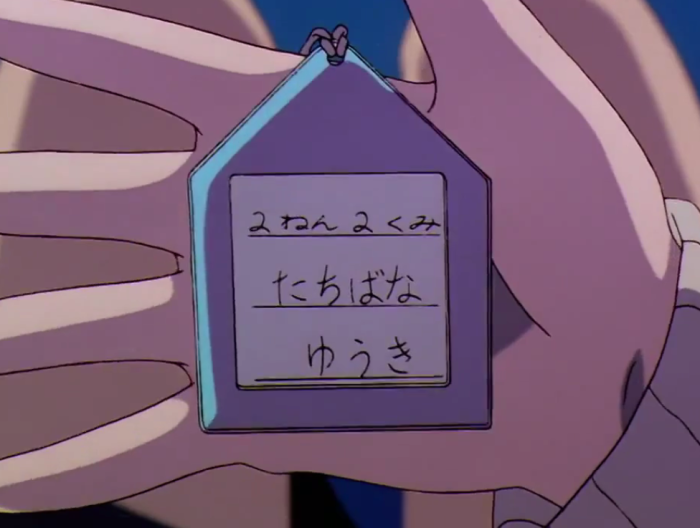 Name Change: The little boy was originally named Yuuki Tachibana (and the spelling of ‘his’ name kinda spoils the ‘twist’). In the dub, he’s Alex Mills.

Are you telling me that no one in the entire museum or even frequent visitors would’ve noticed that a painting was drastically different than it was before?

On their third attempt to confront Silent, Sakura holds up a sign that says “Quietly!” in Japanese, which Tomoyo follows that up with a sign that says “We don’t have much time.” Instead of leaving this in and editing the text, Nelvana completely removes this scene.

Leave it to Kero/Kero’s Corner: Minor nitpick, but Kero says Sakura’s leggings are knee-highs in the Kero’s Corner short in the dub when they’re clearly thigh-highs…..

Next episode, Thunder’s debut as well as Syaoran Li’s. A new kid arrives at Sakura’s school and already seems to have it out for her. Things are made even worse when Thunder shows up and starts causing trouble.