Gym Leader: Sabrina – ‘Blessed’ with intense psychic powers from birth, Sabrina’s been obsessed with honing her powers since she was very young, even pushing her parents away to reach more power. Her true personality has split in two – a stoic and cold woman who loves playing with her opponents, and a happy little child who loves ‘playing’ with her opponents. Despite the ‘real’ Sabrina seeming ruthless and almost inhuman, deep down, she truly just desires to make a connection with a real friend.

Reappears?: Yes, due to this being a failed Gym attempt. She makes an appearance in the episode after next in the rematch.

Pokemon: Abra. It quickly evolves into a Kadabra. Later, she obtains a Haunter, technically.

Ash has two failed Gym attempts this episode and does not get the Marsh badge.

Plot: Ash, Misty and Brock are lost in the woods, again, on their way to Saffron City. In the dead of night, a little girl appears and runs away. Ash tries to follow her to get directions, but finds himself falling off of a cliff. He quickly saves himself with Bulbasaur, and before the group can find out where the little girl went, they spot Saffron City in the distance.

As they enter the city, they’re met with noisemakers and two people dressed in Hawaiian outfits claiming they’ve won prizes as the millionth visitors to Saffron City. As they’re lead into a building, the duo reveals themselves to be Team Rocket and snatch Pikachu away from them. As they try to get him back, Jessie pushes the three onto a warp tile which teleports them into an enclosed room.

As they gloat to Ash and the others through a TV feed, Team Rocket face the same little girl from earlier. She seems to freeze the duo and takes Pikachu back, returning him to Ash. Revealing herself to be more than meets the eye, the girl teleports the group outside of the room and right in front of the Saffron City Gym.

A mysterious man points out where they are and tells Ash to skip this Gym if he really wants to make it into the Pokemon League before disappearing just as soon as he appeared.

Not deterred, Ash confidently goes into the Gym and finds that it also houses some strange psychic training center. A mildly psychic man leads them into the arena and the group is slightly frightened when Sabrina scolds him with a psychic assault.

Ash is surprised to see the little girl from before on the Gym leader seat, and is even more surprised to find that the little girl is with a beautiful woman who bears a striking resemblance to the little girl. They agree to a match on one condition – if Ash loses, they have to be Sabrina’s friends and play with her. Ash, thinking it’s a silly harmless promise, agrees.

Sabrina lets out her Abra and Ash sends out Pikachu. Despite Abra being asleep, it can use its Psychic abilities and Teleports away from Pikachu’s attacks. In the middle of the match, Abra evolves into Kadabra and psychically pummels Pikachu, even sending its own attacks against it.

Seeing Pikachu being utterly steamrolled, Ash calls off the match. Having lost, the little girl says they have to hold up their end of the bargain now and teleports them to a strange deserted town. As they look around, they realize that the food is fake and the few people they are able to find are dolls. They come to the conclusion that Sabrina has shrunken them and put them into a play town filled with dollhouses.

The man again warns Ash and the others not to challenge Sabrina or else they will be lost to her toy box forever. Ash refuses to give up, but the man humiliates Ash by using his abilities to force him to dance with his pants down. He states that his psychic powers are in no comparison to Sabrina, and if Ash can’t beat him what hope does he have against Sabrina?

Ash continues to beg the man for help in beating Sabrina. The man continues his psychic assault on Ash to get him to realize the weight of the situation and just go home.

Despite the pain, Ash is determined to beat Sabrina and continues to beg the man for help. Impressed by his resolve, the man lets up and gives Ash a word of advice – the only Pokemon strong against Psychic types, besides other Psychic types, are Ghost Pokemon, and he should obtain one from Lavender Town.

With Ash accepting his advice, the man leaves and Ash sets out for Lavender Town to get a new Ghost Pokemon who will hopefully help beat Sabrina and earn him a Marsh Badge.

– Lisa Ortiz voices Sabrina here. She’s not making my ears bleed as adult Sabrina, but she is as that little girl. Especially when she does that horrible giggle. Even worse because the little girl needs a higher pitched voice. I still have criticism on her selection as the VA for adult Sabrina, however, because she does not sound right sometimes. I know adult Sabrina is supposed to be cold and emotionless, but Lisa Ortiz has these moments where she confuses cold and emotionless for bored.

Though, I will concede and say Ms. Ortiz does a pretty good job with her. I wish she’d used a much more toned down voice more often…

– It’s now in canon that James has kissed Ash. Get to work yaoi fanfiction writers!

– I give Ash props for finally being skeptical of sudden odd things that seem like scams, and then I take them away for falling for it anyway.

– I might be able to forgive Ash for still thinking that he was a prize winner after he was warped away if not for the fact that 1) his Pikachu was stolen by the people who told them about the prize, 2) they were obviously Team Rocket and 3) He’s a dumbass.

– Heheheh, Ash acknowledges that Jessie and James kissed him.

– Hehehehe, Ash didn’t realize until they got out of those costumes that they were Team Rocket…..wait that’s not funny. That’s sad.

– Hah! Alright, they made up for it with the gag of them drinking tea as Team Rocket does their motto. 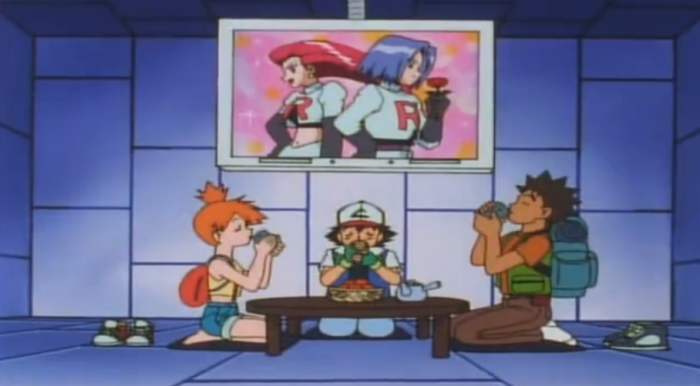 – This is just more Team Rocket Stupidity™ They successfully caught Pikachu and trapped Ash and Co. to keep them from following for at least a very long time. So what do they do? Do they run? Hide? Go to Giovanni? Nope. They gloat to the group through a TV feed and even reveal that they could potentially get out of that room through the warp tile they came in on….

– Masked Psychic Guy: “You can’t control a Psychic Pokemon without telekinesis.” That is not true. At all. In the slightest.

– I agree with Misty and Brock, that display of ‘strength’ by Ash (struggling to physically bend a spoon) was just embarrassing.

– The random bar codes in the Pokedex return.

– And again on Kadabra.

– Man, this is the second time Ash has had to stop a match because Pikachu was just being beaten way too badly. The Indigo days were rough.

– Brock: “She must’ve used her telekinesis to shrink us!” Actually, Brock, telekinesis only allows you to move items with your mind. To transform something into another through psychic powers is transmutation.

– Nice technical nudity by the doll in the bathtub. How’d that escape 4Kids’ censors?

– And we see Ash in his undies? Asleep at the editing wheel, guys?

– Okay, this ending, and subsequently the next episode and rematch are rife, with technical problems. First of all, this whole ‘must get a Ghost type to beat Sabrina’ thing is fueled by several factors. The first of which being that Ash cannot, supposedly, catch and use a Psychic type Pokemon because they state that Psychic types can only be tamed by people with psychic powers, which is not true and will continue to prove to be untrue throughout the series.

In the game, it was originally slated for Ghost types to be strong against Psychic types, but a problem in the coding instead made them immune to Ghosts. I guess they just never played the games and went off of some notes from the original programming team or something.

Like originally planned, Ghosts were made strong against Psychic types in Generation II and onward, but the writers didn’t even get the right memo there because they decide to stick to what the first Generation sent out and later made an episode in Johto, Girafarig’s debut, where they think they ‘fix’ their initial mistake by having the town’s whole shtick being Psychic types always beating Ghost types as almost a duty in doing so. Oops.

Third, there is another Pokemon, one that is way easier to obtain, that is strong against Psychic types……Bug types. Sure, there are few Bug type moves in Gen I, but it’s still a viable and much easier option.

To be honest, one of Ash’s best Pokemon for this battle chose a really horrible time to get laid. Butterfree is both a Bug type and can use Psychic moves if taught.

Finally, why does Ash not ask how Gary and the other three Pallet trainers made it through Sabrina? We know they came through here and that they must’ve beaten her without using Psychic types since none of them are, supposedly, psychic.

I’ve always really liked this episode, and I still do. The main glaring weakness is Team Rocket’s part (what a shock) but mostly because that took up so much of the first half. I guess it wasn’t a total waste since it showed little Sabrina helping them, giving a glimpse into Sabrina’s kinder side.

I love the Psychic battle, Sabrina’s an awesome and intimidating trainer, the plot with her family is interesting and left as an intentional cliffhanger to be resolved in the redux of this battle, Sabrina’s personality splitting into two beings is very interesting, and the dollhouse thing was an awesome way of showing Sabrina’s power and her odd yet sad desire to merely have some friends to play with.

Her habit of turning her failed opponents into dolls is both sadistic yet a legitimate effort to quell her loneliness. I do have to wonder why the dollhouse is so empty, though. Does she just not get many opponents or does her dad save them all?

It’s nice to finally have a failed Gym attempt where the rematch is not in the same episode, though I’ve always been very uneasy about how he actually ends up winning the Marsh Badge.