Card(s) of the Day: Jump: A mischievous little card, Jump obviously possesses great jumping power. Jump can possess other items and make them bounce around.

Plot: A new toy shop is opening up in town, but there’s something odd going on. Apparently, there’s a rumor going around that anyone who buys a toy from that shop will be robbed soon after. When Sakura and Tomoyo see this for themselves, they investigate and find that a Clow card is the culprit.

During the first scene with Sakura rollerblading, Nelvana adds a girly pop song to the background. It’s just regular music in the original. By the way, I usually only mention song changes when they add vocal songs or replace great emotional music with garbage. In practically all of my comparisons a majority of the music is replaced.

Title Change: Sakura, Panda and a Cute Shop is changed to Trouble at Twin Bells.

After the boxes fall down when Sakura meets the store owner, Sakura has this goofy look on her face like “Doh, what am I gonna do with you?” Complete with tiny eyes and sweat drops. However, this is removed from the dub. In fact, the scene looks insanely pointless and almost serious in Nelvana’s dub due to the background music. ‘OH MY GOD BOXES FELL DOWN! AHHHH!!’ 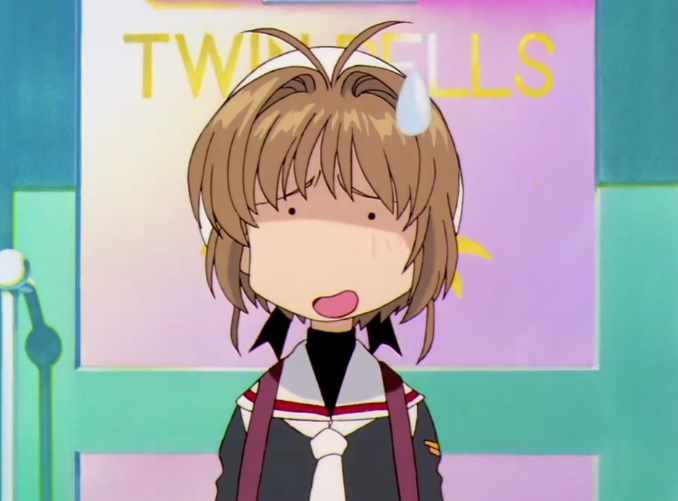 Two scenes are removed after we cut to the school. One of Sakura’s friends, Chiharu, walks up to her as she’s washing her face and asks if she wants to go to the new shop. She says she’s already going with Tomoyo and that they can go together.

Right after that, we see Sakura walking outside when she hears Tomoyo’s voice as she’s singing. We then cut to the choir room where Tomoyo is singing (very nicely) to the tune of a piano. Sakura then tells us as she’s watching and listening with a smile that Tomoyo is in the choir and that she has a great singing voice that has won several competitions. Why these two scenes were cut out, I don’t know. Maybe they were seen as pointless?

I’m not sure why Sakura is “sure” the new store will have camera bags when, for all she knows, the store only sells plush toys and cutesy things. The original talks about purses and notebooks, which are also unlikely, but more likely than a camera bag.

During the cleaning montage, there’s a scene where Sakura is having trouble with tape. It’s sticking to her over and over and she’s flailing around in a cartoony fashion trying to get it off. The dub omits this.

This is one of the stupidest sound edits I’ve ever heard. So basically all music and sound effects are changed for the dub. For the most part, this is no big deal, but this was just insanely dumb. When the girls are leaving Chiharu’s room, we hear a scratch-ish noise to indicate the sound of Chiharu’s window being opened. In the dub….get this, Nelvana replaced this sound with the sound of bowling pins falling down…

…How lazy….or stupid….are you, Nelvana?…Seriously, not even 4Kids would be this stupid. You don’t have to be an adult to tell that that’s distinctly the sound of bowling pins falling down. Hell, you can even hear the ball return.

This was probably meant to sound like a crashing noise to indicate someone breaking in, but seriously guys? That’s the best you can get? Also, nothing in broken in Chiharu’s room to warrant such a sound effect anyway.

This sound edit was so ridiculous that I actually had to watch this scene twice just to ensure that’s what I heard and not something from another tab or an ad. That’s just insulting. Unless Chelsea has a bowling alley in her window, you can kiss my ass, Nelvana.

In the original, Chiharu is much more distraught over her new toy panda being gone than Chelsea is. You can hear the shock in her voice as she tells her friends that her panda is gone, and she cries and hugs Sakura when she suspects it’s a burglar. In the dub, she’s just like “I dunno, but my panda’s gone.” Like she lost a pen she just set on her desk. Also, the crying and hugging are edited out.

After the commercial break, we see a short scene of Toya and Yukito playing soccer as girls fawn over them. Yukito praises Toya, and then we cut to Sakura and Tomoyo. I guess because the evil Yukito makes an appearance, this short scene was edited out. 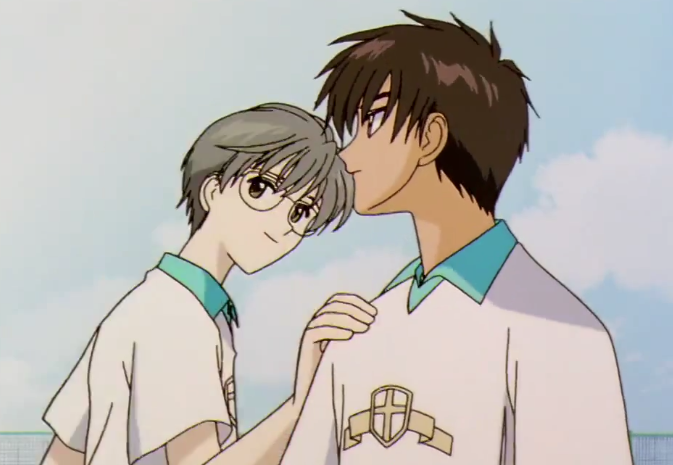 The conversation with Tomoyo and Sakura in gym is pretty much the same, but they omit something in the dub. In the original, Tomoyo tells Sakura that her mother told her a story about a shop where if you buy something from it, the item will be stolen and the culprit will never be found. They suspect the new shop is the culprit.

In the dub, they have a disjointed (due to the lip flaps and the way the conversation is set up) conversation that basically says Madison is having a hard time believing it was a burglar since they left no clue behind and they were only out of the room for a few seconds before it vanished.

In the original, Miss Maki tells the girls after her story about her last shop that she used to be engaged. Her fiancé was a designer who loved plush toys and said his dream was to open a plush toy shop with toys that he designed. The reason keeping the shop open is so important to her is because it’s keeping his dream alive. But she says she can’t do it anymore. I guess because of such a grim tale, this was edited out and they just made her say that the shop was her life.

In the original, Kero (jokingly?) hits on a plush of a cat. Sakura shoves into the frame with angry cat eyes, glares at him for doing so and Kero cowers in fear. The flirting, oddly enough, is left in, but Sakura’s angry scene is gone. Logic! 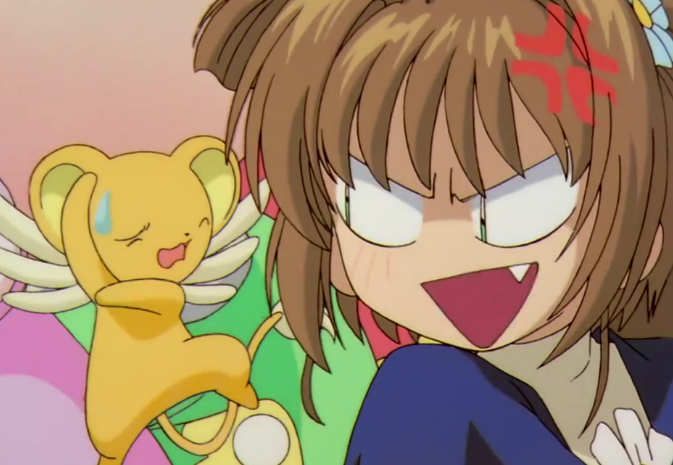 After Tomoyo talks about video editing, we see quick cuts of Sakura showing Kero a few toys in a row and he keeps saying “Nope, not that one.” In the dub, this scene is removed and all we see is Sakura throwing a toy rabbit down and Kero saying that they’ve checked every one.

Because of the odd commercial placement, Nelvana had to put in an outside shot of the shop before we cut back to Sakura dealing with the toys.

After Sakura tells Tomoyo to stay with Miss Maki and she and Kero leave, there’s a short scene where Tomoyo’s holding Miss Maki saying that it’s a shame that she can’t film them this time. This is edited out of the dub.

After Sakura is knocked down by Jump, they show a short scene of her getting up. Omitted.

As the toys explode, Sakura gets bopped in the head with one of them and Sakura and Kero get these priceless looks on their faces. Omitted because of silly faces….I guess. This is slightly significant, because afterward she states “That doesn’t hurt at all.” Basically insinuating that Jump is basically harmless while possessing toys.

When Sakura’s flying through the air on Jump, Nelvana edits out about half of her flailing scene.

In the original, it’s supposed to be a joke that Jump’s “roar” sounds like nothing more than a BOI-YOI-OING sound. In the dub, Nelvana keeps the boing sound, but adds a slight roar to it and makes no mention of the oddity, making the entire joke lost. In fact, the boing sound gets more and more drowned out by the roar as he does it in the dub, making the joke even more lost.

A shot of Sakura running away from Jump is edited out.

After Jump hilariously falls over, Sakura has the look of utter “Huh?!” on her face. Edited out of the dub because cartoonish face. They also add this weird vocalizing music like it’s a fallen god or something. 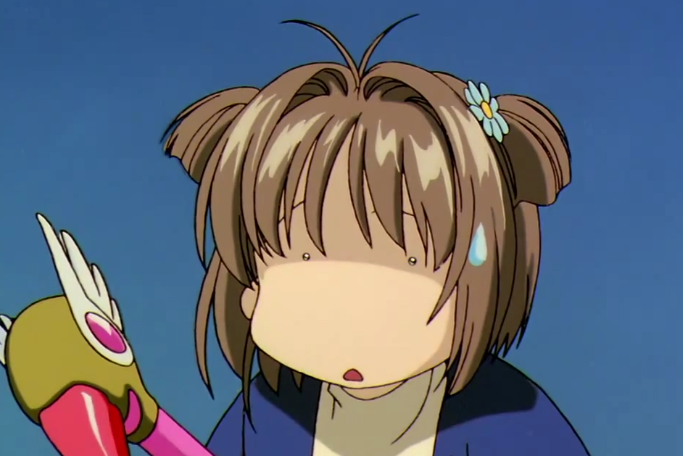 They edit out Sakura’s goofy face when Tomoyo tells them that they’ll have to return all of the toys to the shop.

Some very short shots are cut from the final scene. Mostly filler shots of people looking at toys.

The final shot shows Kero sighing with one of those sigh puffs of air. The dub keeps the scene, but just has him grumble instead of sigh and the puff is gone.

Leave it to Kero/Kero’s Corner: The original mentions nothing of stating that the house was built by Sakura’s family nor that it was built in the same year Toya was born. Kero just mentions the technical aspects of the house such as how many floors it has, it has a garage etc.

Boy this episode had a lot of goofy face edits. This episode was a lot of fun, and while Miss Maki wasn’t the most memorable CotD, she was pretty alright, and her backstory tugged at the heartstrings a bit. Jump seems like a pretty useless card, however. With Fly, it really doesn’t have much of a use, does it?

Next up is Illusion’s debut. Sakura and her friends think they’re seeing ghosts and odd visions, and when Sakura believes she has a run-in her with her deceased mother she believes the ghost stories are true. However, a Clow card may be behind these odd visions and the ghost of her mother.