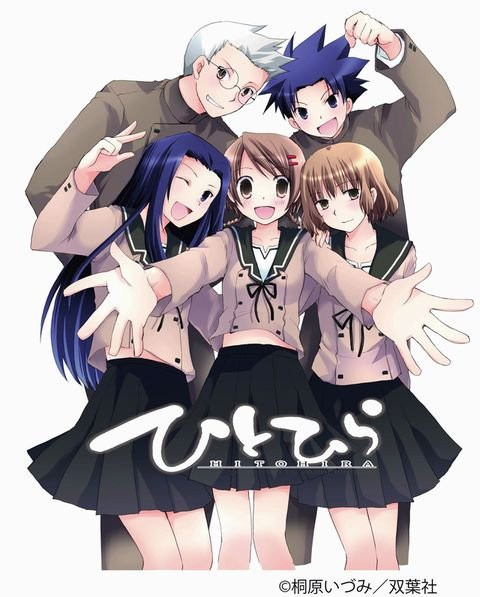 Plot: Mugi Asai is an incredibly shy girl who gets so nervous in crowds that she sometimes loses her voice entirely. However, in times when she’s particularly excited and forgets where she is, she proves to have a powerful voice. During one such time, she yells after hearing her acceptance into the school. She is soon drafted by the drama research society, but can a girl so shy really be in such a club?

Breakdown: Hitohira’s first episode does a fairly good job at establishing our main characters with only a few dangling in the wind. Mugi is very shy to the point where she can lose her voice entirely in crowds or if she feels she’s embarrassed herself in front of someone. I can relate to her situation pretty well, so it does break my heart when she’s in particularly stressful social situations.

Mugi’s a very nice girl, and her shyness doesn’t really get irritating to me like it sometimes did with Tama of Bamboo Blade, but that was really just with the volume of her voice sometimes. I will say that her voice….I don’t know what it is, but it doesn’t really seem to fit with her character design and personality. It seems more suited for someone older and more outgoing, which might be for sometime in the future when she performs on stage and improves her vocal ability. However, her VA should have the range to make her default voice a bit more fitting.

Kayo is Mugi’s best friend and one of the only people that Mugi can talk to comfortably. She understands Mugi’s situation and tries to help her out, but this first episode kinda makes her seem mean about it sometimes.

For instance, Mugi tries to write out what she’ll say in the class introduction so she’ll be more comfortable talking in front of the class when called upon and Kayo tells her to ‘stop making such useless things.’ She seems to have more of an attitude of ‘you really need to get over this’ without addressing it as a real problem. I haven’t seen enough of her to say she’s a bad friend, and she really doesn’t seem like it, but her attitude at Mugi’s situation puts me off a bit.

Nono is the president of the drama research society and one of the founding members. She’s a very calm, reserved and interesting person. Her scenes with Mugi are a bit weird though. I know Nono’s really kind, but are they setting up a romance with her and Mugi? It’s hard to tell.

There’s also Kai who is a bit rambunctious, but doesn’t seem like that much of a trouble maker. I liked him. I also thought the short scene where he smiles at Mugi when she’s looking at his drawing was cute.

Another founding member of the club is Takashi who doesn’t get explored much. He seems responsible and somewhat boring so far.

Risaki is another founding member of the club, and she’s really loud mouthed and kinda violent. She’s Kai’s older sister, but that wasn’t relayed in the first episode. I don’t particularly like her so far.

We also skew off from this main group to follow a girl named Kanna who is incredibly moved by the drama club’s performance of a play that she quickly joins.

The club’s current president, Sakaki, is barely here, but she seems fairly kind and humble. It seems like she can’t do the club anymore or is quitting or something at the end of her scenes.

The show also does a very good job at starting our story off with smooth pacing. The story itself is pretty interesting, and I can’t really think of another show to compare it with, so it’s fairly unique in that regard.

The art is nice. It’s a toned down shoujo style. The girls are cute, and stuff like hair and eyes are exaggerated of course, but the eyes aren’t gigantic like they commonly are in shoujo shows. They’re at just the right size to look nice and expressive without being distracting. The overall style of the eyes was also nice and natural. The character designs weren’t horribly memorable, but they were good. The one I remembered most out of all of them was Takashi because his hair is so weird.

The overall art is very detailed and the animation is fluid with only a few small hiccups I saw. However the colors can be downright ugly, especially inside the school. I hope you like orange and brown.

I mean….eugh. The uniforms on their own are perfectly fine, I actually really like them, but when they’re put in such an orange and brown classroom….eugh. The walls are yellow-orange, the desks are orange, the floor is brown, the uniforms are light brown for the guys and beige-ish orange for the girls with brown skirts. The only color of contrast in this whole room is green and that just makes it more ugly.

I feel like this school is what the fairy godmother would’ve made out of the pumpkin if Cinderella needed a school for some reason.

It would be better if the colors weren’t so muted. It just melts into a pile of earth toned mush in front of your eyes.

The music is okay, but completely forgettable.

I’m interested to see how this will go in the future, and the first episode was a really easy watch, when they weren’t in that classroom, with plenty of interesting moments and room for growth.