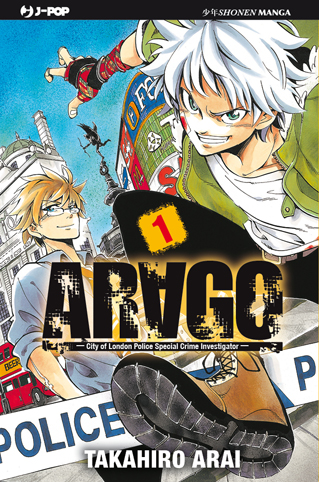 Plot: Arago Hunt and his brother Ewan suffered from a terrible tragedy as children when their parents were murdered by the mysterious serial killer, Patchman.

As they grew older, Ewan came to be a well-respected police officer while Arago became an angry wanderer obsessed with their parents’ murder. When the two see Patchman yet again, Ewan falls victim to him.

In an effort to save Arago’s life, he transfers his arm as well as a mysterious power called Brionac to him. Following his brother’s death, Arago takes his place as a police officer and tasks himself with fighting evil supernatural beings that plague London as well as finding Patchman to take him down once and for all.

Breakdown: This was a very enjoyable series with a decent story and great characters that you mostly grow to love or at least like. However, I can’t deny that this series is all sorts of ‘been there, done that’.

Main character has a tragic past, bent on revenge, has a power everyone wants and is super awesome, and he wants to protect the people he loves. Dark and mysterious villain turned good guy. Love interest childhood friend who is mostly useless for 99% of the series until they just decide to give her useful powers. Wise old man also with a tragic past that fuels his desire to join the fight.

Really the only one I can say who doesn’t fall into the typical tropes is Oz who is a kickass trap-using agent of the queen meant to kill supernatural beings and protect Arago, but he’s not even introduced until the final quarter of the series.

I guess also Coco and Colo, The Old Man/Joe’s daughter, also a policewoman, and her K-9 partner respectively. She’s another love interest for Arago but is at least more interesting than childhood friend/Rio in that her side-story of her connection with Colo was better than merely Rio being there during Arago and Ewan’s childhood and her being in love with Ewan.

In regards to villains, they also don’t stray too far from the template as we have supernatural monsters of the week for a little while based on actual mythology, which is kinda cool, and the four main sub-baddies which are modeled from the four horsemen of the apocalypse. At least they’re given backstories since each of them were previously human, and their backstories are pretty good for the most part.

Patchman himself is, sadly, the most bland. Outside of his concept, which is being basically a Frankenstein creature hunting people for their parts to add to his body, hence the ‘patch’ part of his name, he’s really just another villain who wants power and to destroy the world. We never learn of his backstory or where he came from, he’s just there and evil.

The story as a whole is very solid, but, again, it’s pretty predictable at certain points. There are numerous plot twists that got me, but the finale was really by the book, especially the very very ending.

Why exactly is the world so riddled in monsters now that Patchman and the horsemen are gone that Rio and Coco (and Colo? Did he die?) now have to battle monsters on a regular basis, and demand for such extermination requires Oz’s organization to be rebuilt? Why did they have to wait until the very very very ending for Rio and Coco to not be useless damsels in distress/background art?

The art is a mixed bag. While some of it can get pretty detailed with some really good shots in there, there are so many shots that look insanely awkward. The artist has a rough style with a lot of edges which makes some shots, mostly of people, look ugly, and it can be such a mess sometimes that it can be incredibly difficult to follow what’s going on in battle sequences.

Bottom Line: This is a solid action manga that is also a quick read with each chapter only about 15-18 pages each. However, I really don’t think you’ll find anything new or groundbreaking here. I thoroughly enjoyed it, but I’d just as soon read a bunch of other action fighting manga. Also, I’m not exactly sure why this series is set in London. I forgot they were there most of the time, and they really don’t do much with the location.

Additional Information and Notes: Arago was written and illustrated by Takahiro Arai. It was published by Shogakukan.

Recommended Audience: There’s moderate swearing, quite a bit of violence with mild gore and moderate blood. There’s technically no nudity but it gets a little close on occasion, most notably in Coco’s arc. 10+